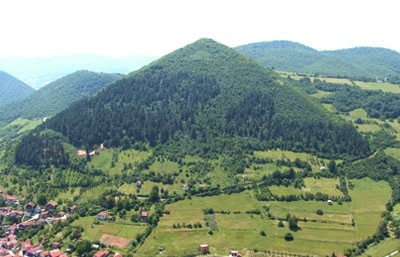 The virtually unknown Chinese pyramids are historic monuments that now struggle against the ravages of time and the elements. The elaborate walls of one grand structure were accidentally discovered by U.S. pilot James Gaussman towards the end of the Second World War. His engine failed when returning from a mission to aid the Chinese army en route to his base in Assam, India. Flying over Xi’an at a low altitude, Gaussman was astonished at the site of an enormous pyramid in the distance. The pilot did not waste this precious opportunity, and flew over, taking the photographs that would later accompany a report presented to U.S governmental authorities.

In 1947, another U.S. pilot, keen to the legend of Gaussman’s mysterious “Great White” Chinese pyramid, flew close enough to the structure to catch a glimpse for himself. He estimated the ancient wonder to stand nearly 1500 ft high—in comparison to Egypt’s great pyramid of Giza which stands a mere 480 ft. from base to vertex.

Yet this miraculous pyramid remained a closely guarded secret, kept hidden from the prying eyes of international investigation by Chinese authorities. In spite of such restrictions, German investigator Hartwig Hausdorf attempted to film and photograph the massive ancient structure. While Hausdorf managed to avoid the Chinese military that carefully patrolled the airspace above the Xi’an desert, he was never able to find the grand pyramid Gaussman photographed. Still, Hausdorf’s 1994 book, “The White Pyramid,” detailing his findings of the other structures found in the area, and ushered in a great interest for these ancient treasures.

In 2000, China recognized that there were some 400 pyramids in the Shanxi region, to the north of Xi’an. Smaller than the legendary “Great White” pyramid, these ancient remains have been classified by some as burial mounds. While some of these structures do in fact serve as tombs, others suggest the earliest Chinese pyramids served a more mysterious purpose. Hausdorf even asserts that these structures have an extra-terrestrial origin.

Just how old are they? While many can be dated to various dynasties, others are believed to be older. Analyzing an aerial photograph of one set of pyramids east of Xi’an, ancient civilization researcher and author Graham Hancock determined that their layout coincided with the constellation of Gemini. However, computer analysis found that it is what Gemini would have looked like on the spring equinox in 10,500 BC.

The majority of the later pyramids belonging to the Eastern Xia Dynasty (1032-1227) are in a state of extreme disrepair—many display deep cracks, and are in danger of crumbling completely. “The whole set of burial sites of nobles run the risk of disappearing”, confessed the subdirector of the administration office of the tombs, Dai Wenzhen in an article by China’s state-run Xinhua News Agency. According to Dai, the majority of the Xia dynasty tombs, located in the Ningxia region, would pose similar problems, and some could even be catalogued as “ruins.” According to Xinhua, $1.25 million was put up for restoration of the tombs, but it was only enough to keep further erosion at bay.

While the 207 tombs and nine mausoleums in Ningxia have barely endured the ravages of time, the virtually unknown pyramids in Shanxi are more stable and impressive. By some estimates, the majority of these 400 structures in Shanxi were constructed during the dynasty of tyrannical emperor Qin Shihuang (259-210 BC), to shelter the remains of his imperial court; he intended them to be near his tomb at their final slumber.

The Mystery of the Qin Shihuang Pyramid

Emperor Qin Shihuang is known for his obsessive search for the secret to immortality. His fever for attaining glory lead him to create one of the most intriguing and covetous marvels on the planet: the imposing “Terracotta Army”—a nearly mile long stretch of soldiers and horses representing his grand guard. The attention to detail is so exquisite that no two figures are the same; prompting some to believe that each figure was cast to represent an actual person from that time. The relics of this despotic monarch have captured the world’s attention since they were first uncovered in 1978. Yet, the treasures hidden within his mortuary pyramid remain conjecture.

According to ancient Chinese documents—the same texts that helped archeologists reveal the terracotta soldiers—Emperor Qin tried to outfit his subterranean pyramid with an exact replica of the Chinese territory. The texts explain that the interior giant vault of the chamber is embroidered with copper and marked with jewel encrusted accents, simulating the stars of the firmament. It also boasts of an artificial replica of the rivers of China, flowing with mercury. Scientific expeditions, in fact, confirm that the earth covering the surface of the pyramid had considerable concentrations of this liquid metal.

Currently the pyramid of the Qin emperor is nearly 250 ft. high, but it is estimated that when constructed 2,200 years ago it reached about 380 ft. The width of the base from east to west is about 1130 ft., and its south to north length is almost 1150 ft. Emperor Qin took great care in making access to his final dwelling difficult—covering the pyramid with soil and vegetation, and blocking all possible access to the main chamber—and no investigation has yet uncovered the infinite archeological treasures that could be hidden within this enormous edifice. 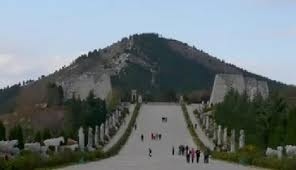