The Egyptians stopped building their most prominent structures with the beginning of the New Kingdom, but why? What was the cause that led to the abandonment of the most incredible ancient structures of ancient Egypt?

From the beginning of the New Kingdom around the year 1550 BC, ancient Egyptians stopped building their most prominent and detailed structures, the Pyramids. Researchers have never understood the reason in their extreme and abrupt change in architectural preferences. Their most incredible constructions were replaced by tombs that were carved into the mountainside. These new architectural preferences helped reduce the amount of looted tombs. During the New Kingdom, the pyramids that were still “built” were of much lower quality and never reached the dimensions of the past.

Researchers have long wondered why the ancient Egyptians stopped building their most famous structures, some suggest that there is a possibility that changes in materials and construction techniques caused the construction of more volatile structures that could not withstand the test of time like the constructions built before them.

We know that they stopped building the pyramids, but how and why did they start building them?

Well, the pyramid was born as the logical “evolution” of the mastabas, a monument used as a burial site by the rulers of the Early Dynastic Period of Egypt. No one know exactly why the mastabas were “displaced” by the incredible pyramids, some researchers suggest that the Pyramids were constructed de to the aspiration to attain greater heights, but both the Pyramids and the Mastabas shared a similar goal, to maintain the essence of the King for eternity.

It was during the beginning of the Third Dynasty around 2700 BC when ancient Egyptians began transforming mastabas into pyramids, initially, these structures were staggered, very similar to those found in ancient civilizations of America. These first pyramids, like Djoser’s Step Pyramid at Saqqara, was built in the form of various steps, as if it were a ladder to heaven.

Some researchers are quite skeptical about the pyramids being used as tombs since there has been no evidence found, nor inscriptions, that would link these marvelous constructions to tombs.

The other great mystery about the pyramids is, how this ancient civilization was capable of lifting structures of such dimensions formed by massive stone blocks?

There are many hypotheses developed even since the days of ancient Greek scholar, Herodotus who proposed several theories on how the ancient Egyptians managed to build these structures but never gave a definitive answer. Strangely, there have not been discovered, any ancient texts or documents reporting on the period of the construction of the pyramids.

In total, researchers have found more than one hundred pyramids in Pharaonic Egypt. Pyramids of various sizes, dedicated to both kings and nobles and great craftsmen. The most notable construction is the Great Pyramid of Giza for its huge size. The pyramid is estimated to have around 2,300,000 stone blocks that weigh from 2 to 30 tons each and there are even some blocks that weigh over 50 tons. It is a true masterpiece and has rightly earned the title of a “Wonder”. It was built with such precision that our current technology cannot replicate it. Egyptologists believe that the pyramid was built as a tomb over a 10 to 20-year period concluding around 2560 BC.

It was originally covered with casing stones (made of highly polished limestone). These casing stones reflected the sun’s light and made the pyramid shine like a jewel. They are no longer present being used by Arabs to build mosques after an earthquake in the 14th century loosened many of them. It has been calculated that the original pyramid with its casing stones would act like gigantic mirrors and reflect light so powerful that it would be visible from the moon as a shining star on earth. Appropriately, the ancient Egyptians called the Great Pyramid “Ikhet”, meaning the “Glorious Light”. 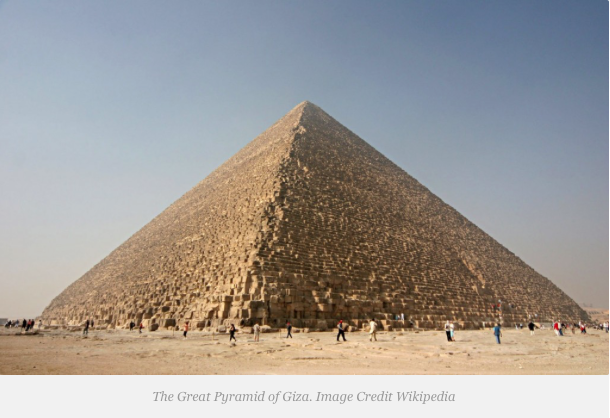 After the prowess of the Fourth Dynasty, future generations would show a drastically lower skill when it came to the construction of monuments and pyramids. After the fourth Dynasty, the builders were not able to obtain such perfection in the building of pyramids, the example of the little pyramid of Abusir is consistent evidence of technical setback.

In fact, in the following centuries, the design and development of these structures would get worse. And although it has been traditionally accepted that from the sixteenth century BC ancient Egyptians began abandoning the Pyramids, the fact is that there are references to these structures in future periods.

The Nubian kings from the fifteenth Dynasty were buried small and low-quality pyramids. However, and this may be the crux of the matter, from the Middle Kingdom ancient Egyptians began to build more perishable constructions with materials such as wood, brick and adobe in the inside. This is the reason why very few of these constructions have survived to this day.