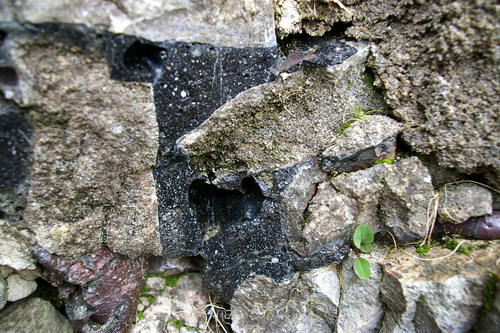 The hill fort ‘Tap O Noth’ lies on a hill top in Aberdeenshire, Scotland. Along the fort is a vitrified wall, a wall heated to such an intensity, for a period of time, that it becomes like glass. Among artifacts found at the fort are a stone axe, dated to somewhere between 2,000 BC and 800 BC, as well as a bronze ring, dated to between the First and Third centuries AD.

Fifty examples of vitrified forts have been found in Scotland, and their presence is a great mystery since it is unclear how or why they would have been heated to such an extent that the surface of the stone turned to glass.

Robert Schoch, a geologist, after having examined some of these vitrified forts, wrote an article in New Dawn magazine. He states that temperatures of 1,000 degrees centigrade (1,832 fahrenheit) are required to vitrify rock.
The forts go back to the Iron Age in Scotland, around 800 BC up to the early centuries AD. King Arthur is thought to have lived around the Fifth or Sixth Century AD.
A Welsh poem written by Taliesin speaks of King Arthur and a glass castle. Many fairy tales have featured glass castles, a somewhat improbable concept if one is thinking of a castle as a strong fortress, but if vitrified rock is what is meant, then it becomes much more plausible.

Robert Schoch examines a number of possible theories to explain this phenomenon, discarding most of them as unlikely, then settles on a concept known as plasma events. These are occurrences of ionized gases taking the form of gigantic electrical outbursts, which can melt and vitrify rocks. He further suggests that around 9,700 BC, a major plasma event may have occurred on the earth that caused the last Ice Age to come to an end. Many recurring plasma events may have also followed the ending of the Ice Age. The sun, during solar storms, is known occasionally to throw off massive spurts of plasma.

Huge plasma events might have caused the Great Flood, recorded in countless legends throughout the world. A major plasma event would have vaporized huge volumes of water that would then have fallen back to earth over a period of time after the event, causing immense flooding. The Sphinx at Giza, which Robert Schoch also examined, he believes was carved between 5,000 and 9,000 BC, and then was subject to intense rains that might also have been caused by a plasma event.
He points out that plasma is everywhere, and is present throughout the universe in intergalactic space. His is quite a fascinating theory, and he suggests that the world’s megalithic monuments, which have also never been adequately explained, might have been built by early humans in an attempt to create giant structures that would withstand plasma events. Humans would have initiated the megalithic age of building right after they had witnessed the great floods and ensuing destruction caused by early plasma episodes.
The Wikipedia article, Vitrified Fort, lists fourteen of the most remarkable of these sites in Scotland. They are also found in Ireland, Germany, Hungary, and in France.
On a more mythological note, on the June 22, 2012 broadcast of the H2 program, Ancient Aliens, it was suggested that the Irish god Lleu, who had as his weapon a spear, had been the one who vitrified the rocks of the old Scottish forts by using this magic weapon. During an attempted assassination, Lleu turns into an eagle and flies away. He is also said to have enchanted trees.
Whether it was the god Lleu or plasma unleashed by the sun (or whether the two are perhaps the same), the vitrified hill forts of Scotland are a testimony that something quite beyond the ordinary happened to cause the stone to turn to glass, perhaps a very long time ago.
There is so much to history that we simply do not know, and so many indications that our entire worldview needs a good relook.

Is there a particular outcome, opportunity, or material thing you really want in this moment?