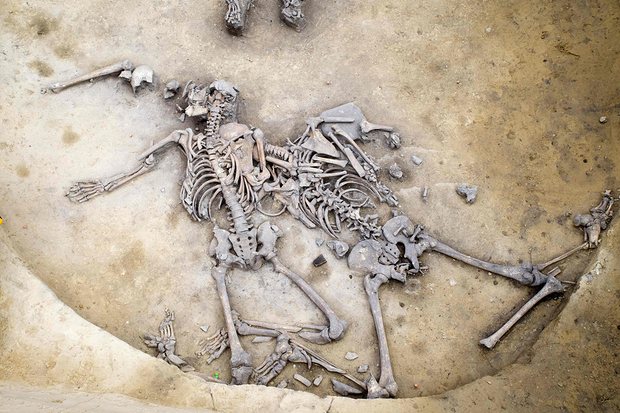 The Neolithic group of  six appeared to have died violent deaths, with multiple injuries to their legs, hands and skulls.

Archaeologists said Tuesday, June 7th, they had discovered the remains of victims from a 6,000-year-old massacre in Alsace in eastern France that was likely carried out by “furious ritualized warriors”.

The corpses of 10 people were found outside Strasbourg in one of 300 ancient “silos” used to store grain and other food, a team from France’s National Institute for Preventive Archaeological Research (Inrap) told reporters.

The Neolithic group appeared to have died violent deaths, with multiple injuries to their legs, hands and skulls. The skeletons of five adults and one adolescent were found, as well as four arms from different individuals. The arms were likely “war trophies” like those found at a nearby burial site of Bergheim in 2012, said Lefranc.

He said the mutilations indicated a society of “furious ritualized warriors”, while the silos were stored within a defense wall that pointed towards “a troubled time, a period of insecurity.”

It is hoped that genetic testing on the bones will reveal more information about the killings, but Lefranc said one theory was that a local tribe had clashed with a new group arriving from the area around modern-day Paris.

“It appears that a warrior raid by people from the Parisian basin went wrong for the assailants, and the Alsatians of the era massacred them,” he said.

However, in the long run, it was the “Parisians” who had the last laugh.

The local tribe appear to have been supplanted by the newcomers around 4,200 BC, as demonstrated by new funeral rites, pottery and hamlets.

The intriguing site and findings is being further studied.