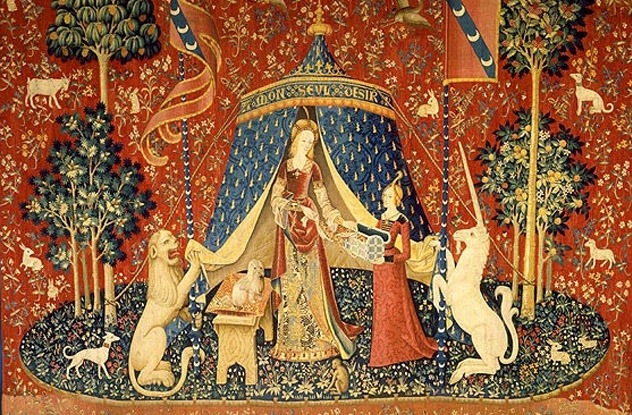 Six beautiful tapestries depicting the hunt of a unicorn are on permanent display at the Musee de Cluny in Paris. They’ve been called the “Mona Lisa of woven artworks,” but no one knows who created them. Despite their being made in the 15th or 16th century, no mention of the tapestries exists before 1814. No one took any notice of them until 1841, when the damp and nibbled items were rescued from their home in the Chateau de Boussac.

Some clues to their history are to be found in the monograms on each corner— “AE” and “AF”—yet no one knows to what they refer. Five of the six tapestries feature a slim, blonde lady, and we can only speculate on who she is. Many historians suggest it’s Mary Tudor, sister of Henry VIII, who was married to King Louis XII of France for the last six months of his life. Curators see secular allusions to marriage, love, and the desire for children that would back up that theory.

Others suggest the scenes reflect the five senses. In the first, the woman touches the unicorn, then she feeds a bird, smells flowers, plays music, and finally shows the unicorn his reflection. Christian scholars suggest the unicorn represents Christ being tamed by his mother the Virgin Mary. Or, if the tapestries’ film appearance in the Gryffindor common room is to be believed, they may represent an actual unicorn hunt.