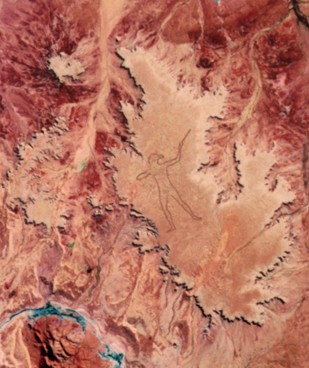 The Marree Man, or Stuart’s Giant, is an enormous geoglyph discovered by air on June 26, 1998. The drawing appears to depict an indigenous Australian man, most likely of the Pitjantjatjara tribe. He is hunting birds or wallabies with a throwing stick. The geoglyph lies on a plateau at Finnis Springs, which is 60 km west of the township of Marree in central South Australia. The figure is large, measuring 4.2 km tall with a circumference of 15–28 km. It is officially the largest non-commercial geoglyph in the world. The origin of the artwork remains a complete mystery. There are no historical accounts of the geoglyph and nobody reported witnessing its creation. The lines that make up the Marree Man are 20 to 30 cm deep and up to 35 meters wide. A lot of time and energy was spent creating this artwork. Many researchers have stated that the creation of the geoglyph would have required aerial photography or satellite imagery. The discovery of the geoglyph fascinated Australians due to its size and mystery. At the time of the discovery there was only one track entering and one track exiting the site and no footprints or tire marks were discernible.

In the weeks following the discovery, several anonymous press releases suggested that the Marree Man was created by people from the United States. The releases quoted measurements in miles, yards and inches, instead of the metric system usually used in Australia. When the site was discovered, several items were found in a small pit near the figure. Officials discovered what appeared to be a satellite photo of the Marree Man, a jar containing a small flag of the US, and a note which referred to the Branch Davidians, a religious group infamous for the Waco raid in 1993. These were the only man-made items found at the site. In January 1999, pubic officials received a strange fax from a hotel in Oxford, England. The fax discussed a plaque buried five meters south of the nose of the figure. The fax also said that the plaque was intended to have been dug up by a “prominent U.S. media figure” shortly before the Sydney 2000 Olympics. Similar clues were said to be buried near the Cerne Abbas giant near Dorset and the Long Man of Wilmington, Sussex, in England.

The plaque was discovered in the suggested location. It has a small American flag on it, with an imprint of the Olympic rings. The plaque reads: “In honor of the land they once knew. His attainments in these pursuits are extraordinary; a constant source of wonderment and admiration.” The quote on the plaque comes from a book, The Red Centre, by H.H. Finlayson, in a section describing the hunting of wallabies. The Red Centre also has photographs of hunters without loin cloths, which is the same depiction as the Marree Man. The archeological site was closed shortly after the discovery of the figure, when some members of the Dieri tribe complained of harm and exploitation of the land. Certain people do believe that the geoglyph was created by an ancient civilization. The hand of the figure which is not throwing has the correct posture for the normal Aboriginal technique for throwing. The initiation scars on the chest were also placed perfectly. The creation of the Marree Man remains mystery. 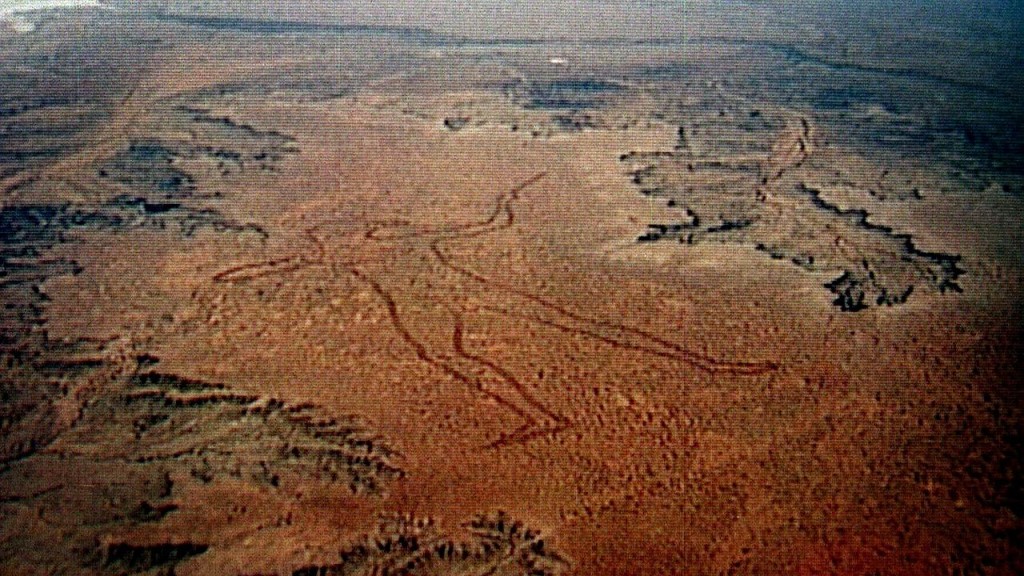