The Sacred Book Of The Ancient Maya

These beings who created mankind are referred to in the Popol Vuh as “the Creator, the Former, the Dominator, the Feathered-Serpent, they-who-engender, they-who-give-being, hovered over the water as a dawning light.”

What does this mean? When you think about it, the ancients were telling how “they” possibly referred to as the gods, the heavenly beings created mankind.

Interestingly, the ancients speak about how everything came to be, and we can clearly see that other beings seemed to have influenced the creation of “man.”

Reading further through chapter one we find the following: “They are enveloped in green and azure: that is why their name is Gucumatz (Feathered-Serpent). Of the greatest sages is their being. Then came his Word with the Dominator and the Feathered-Serpent; and they consulted together and meditated, and while they consulted, it became day.

And at the moment of the dawn, MAN manifested himself, while they, in the darkness and in the night, were holding counsel upon the production and growth of trees and creeping vines, of sentient beings and humanity, by him who is the Heart of the Heavens, whose name is Hurakan. Lightning is the first sign of Hurakan; the second, the path-of-the-lightning; the third is the thunderbolt. And these three are the Heart of the Heavens.”

Interestingly, not only did the Creator, the Former, the Dominator, the Feathered-Serpent CREATE man, they created everything else:

Thus, of a truth, the Creation took place, and the Earth was spoken into being. “Earth!” cried they, and instantly it took form.

Like a mist or cloud was its beginning. Then the mountains rose up out of the water. Only by a magical power could that be performed which had been meditated upon as to the shadowing forth of the mountains and valleys, and at the same time the cypress and the pine appeared. Then was the Gucumatz filled with joy, crying out: “Blessed be thy coming, O Hurakan!

Our work and our labor has accomplished its end.” The earth then was covered with various forms of animal life. And the Creator and Former said to the animals: “Speak now our name!” But the animals could not speak as a man. Then said their Makers: “Our glory is not yet perfect, since ye cannot invoke us. Dens and food shall ye have, but as to your flesh, it shall be eaten. This is your destiny.”

Does the ancient text speak of several times “they” tried creating man? It seems as though these beings failed at the beginning, and in the “heaven” they sat and thought it through one more time. Can you literally sit in heaven? Well, probably, if you are in an airplane or other vehicle… right? But here is what the ancient texts says:

“Again there is counsel in heaven. “Let us try again; let us make them who are to be our vehicles and nourishers.” So the Creators determined to make man. Of red earth they molded his flesh; but when they had made him, they saw it was not good. He was without coherence, strengthless, inept, watery; he had been endowed with speech, but he had no intelligence; and straightway he was consumed in the water without being able to stand upright.”

It seemed as if the Creator, the Former, the Dominator, the Feathered-Serpent, they-who-engender, they-who-give-being were not satisfied with their creation and took matter into their own hands again. The ancient texts continues:

Again the gods took counsel. It was decided to make man of the wood of the tzite cork-tree, and woman of the marrow of the zibac (willow); but the result was in no wise satisfactory — they were merely wooden mannikin. And these are the people who inhabit the surface of the earth. They existed and multiplied, but had neither heart nor intelligence, nor memory of their Creators. They led a useless life and lived like the animals. 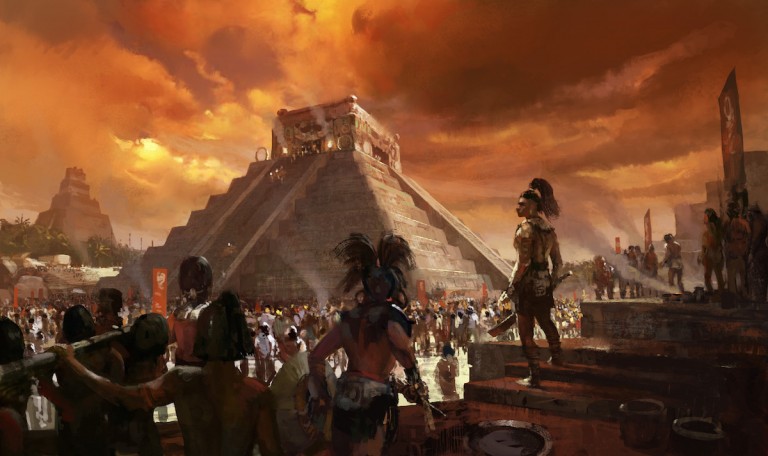 They were but an attempt at men. Because they had not directed their thoughts to the Heart of the Heavens, the face of the earth grew dark, and a dismal rain began to fall. Then came the nature sprites, big and little, and the animals that had formerly served them, to torment them; even their utensils took shape and voice to add to their misery. Then the men ran hither and thither in despair. They sought refuge upon the house-tops, but the houses crumbled beneath them; they tried to climb the trees, but the trees shook them down; they attempted to enter the caverns, but the caverns closed before them. Thus was accomplished the destruction of these creatures, save a few of their descendants who now exist in the woods as little apes.

The third part of the Popol Vuh continues the story of creation with the following text:

“Once more the gods commune together and the Creator and Former made four perfect men — wholly of yellow and white maize was their flesh composed.”

Here is the interesting part of the Popol Vuh:

They had neither father nor mother, neither were they made by the ordinary agents in the work of creation, but their coming into existence was a miracle extraordinary, wrought by the special intervention of the Creator. “Verily, at last, did the gods look on beings who were worthy of their origin.”

As you can see in the above parts of the Popol Vuh, we have detailed descriptions of how beings not from Earth, CREATED man: the Creator, the Former, the Dominator, the Feathered-Serpent, they-who-engender, they-who-give-being communed tighter on several occasions, and after several tries, “THEY” created MANKIND.

Is there a particular outcome, opportunity, or material thing you really want in this moment?