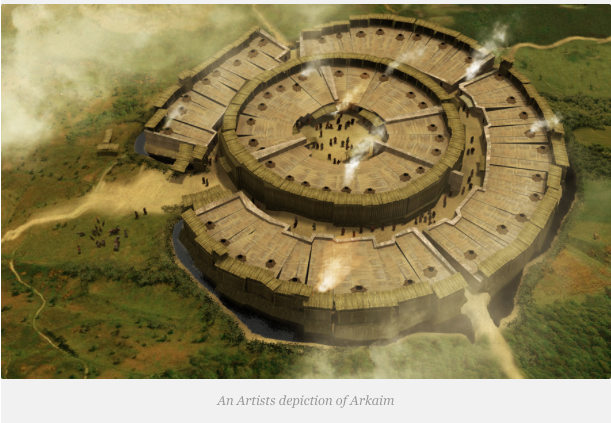 Located in the Southern Urals steppe, 8.2 kilometres north-to-northwest of Amurskiy are the incredible structures of Arkaim. Many archaeologists and researchers have ventured far enough to call this site the Russian stonehenge. According to researchers the site is generally dated to the 17th century BC. but there are several other theories that go even further dating as early as the the 20th century BC. Many refer to Arkaim as “the Country of towns”, and is believed to be one of the strongest anomaly zones in Russia.

In recent years, archaeologists have found several artefacts that back up the proposed theory, that this site, located in russia is in fact much older than mainstream archaeologists hold it for. Some even believe this archaeological site is as old as the Pyramids of Egypt, even though the exact date of the Pyramids remains an enigma.

The development of Arkaim is simply amazing. The settlement was built according to a radial scheme, with the outer diameter of the circle having around one hundred and sixty meters with a moat approximately two meters deep surrounding the outer wall and the wall of Arkaim is astonishing with almost five meters wide and five meters high. Archaeologists have concluded that Arkaim was a well planed settlement that has much more to offer in terms of history and archaeology than previously thought.

According to researchers, this fortified town had a series of gates, four in total; the widest gate placed in the south-western direction while the remaining three were oriented to the cardinal directions. In addition to the walls of Arkaim, the settlement had a two meter wide channel behind the wall connected to the outer moat. According to archaeologists 35 houses were adjacent to the outer wall, while each of them had an exit to the main street of this ancient settlement while there were also 25 houses in the interior parts of the settlement.

The defences of this ancient settlement were very advanced, not only did the builders of Arkaim have incredible walls and an elaborate channel of water they also constructed “labyrinths” at the entrances of this settlement that were possibly fortified traps making access to the town very difficult. There are other theories that suggest that these labyrinths were not built to serve as defensive structures but rather as areligious or sacral monuments.

Arkaim is clearly different in many aspects compared to other settlements of that time in history. While other cities were constructed with less elaborate defensive structures and had a more “linear” design, compared to a well designed and well connected settlement of Arkaim, where all the buildings were interconnected and stood strong almost resembling a singular structure getting the most out of the space available for construction.

Researchers exploring Arkaim have found a number of artefacts such as pottery, metallurgical furnaces, and cattle-pens. It is believed that the ancient inhabitants of Arkaim were very skilled metallurgists.

Based upon the research of the bones of animals fount at the site, scholars believe that the livestock consisted mainly of horses, cattle and small ruminants. As for the farming activities at Arkaim, researchers are again divided by several theories, while some believe that the fields of Arkaim were worked by the inhabitants of this settlement, others believe that the discovery of smaller settlements from the same era in the vicinity of Arkaim points towards the possibility that these were in fact farming settlements that belonged to Arkaim.

But not only was the planing and construction of Arkaim unique, the houses belonging to the settlement were very unique as well and it is believed that each family was responsible for their property and the roofs of the houses found at Arkaim are believed to have served as roads, some archaeologists believe that the road on the roof tops was so wide that it was possible to ride in a wooden chariot on it.

Arkaim was a very sophisticated settlement, and in some cases it displayed unique technologies that went far beyond the capabilities of other similar settlements since Arkaim had a very complex water drainage system and sedimentation pits. Some archaeologists believe that such ancient sewerage system has not been found elsewhere in the world making it a unique feature of Arkaim. (Some will challenge this theory and refer to ancient Sumerian cities that displayed incredible archaeological features and well planed cities as well.)

Some researchers believe that Arkaim was not a settlement at all, or better said, not a permanent settlement at least. Some suggest that the inhabitants of Arkaim lived there in certain periods throughout the year suggesting that it might have had some religious or sacral importance and even compare it to the famous Stonehenge monument. Some researchers believe that there is a profound connection between Arkaim and Stonehenge and some astronomers who apparently studied both of these sites concluded that Arkaim like Stonehenge it is a celestial observatory of what they call “ultimate accuracy”.

Researchers point to the fact that Arkaim and Stonehenge are located almost at the same latitude and both are in the middle of bowl-shaped valleys with hilly horizon views.

Even though the ancient settlement has gained a lot of attention from the media and even tourists, some researchers described Arkaim as a “SWASTIKA” city, “MANDALA” city and even “the ancient capital of early Aryan civilisation, as described in the Avesta and Vedas”. All of this in order to gain more publicity. Arkaim was declared a national archeological reserve in 1991.

Archaeologist Gennady Borisovich Zdanovich, explains: I see Arkaim as the brightest example of an integration of primitiveness, unity and wholeness which combines very different functions.

Arkaim is believed to have existed for around three hundred years, before being consumed by a great fire; which according to some researchers was caused by the inhabitants of this ancient settlement. 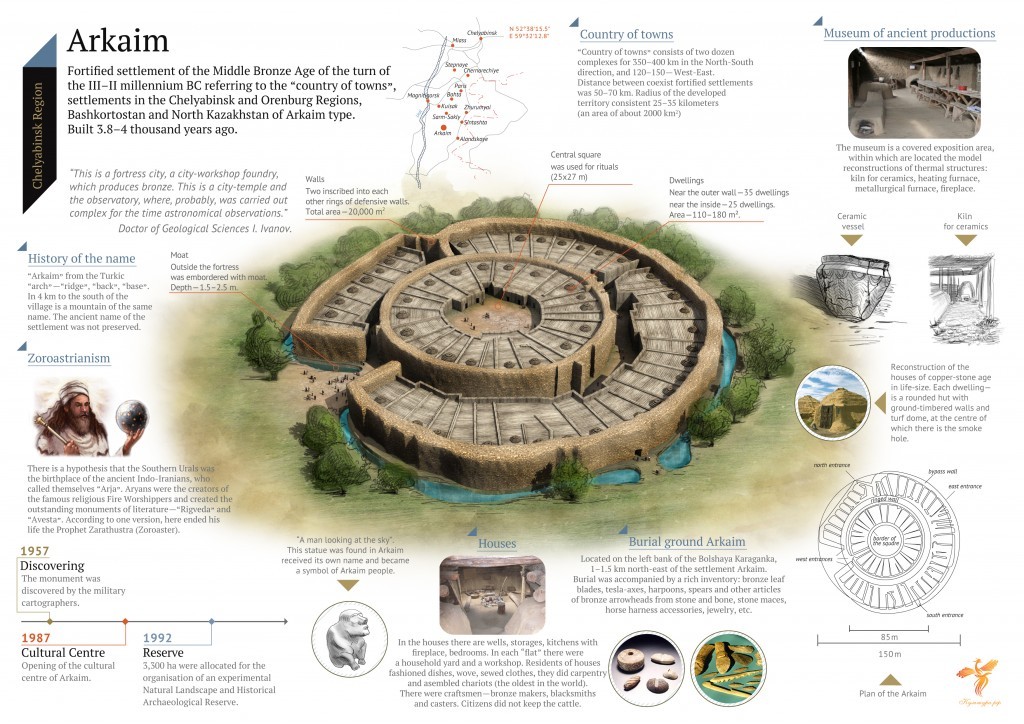