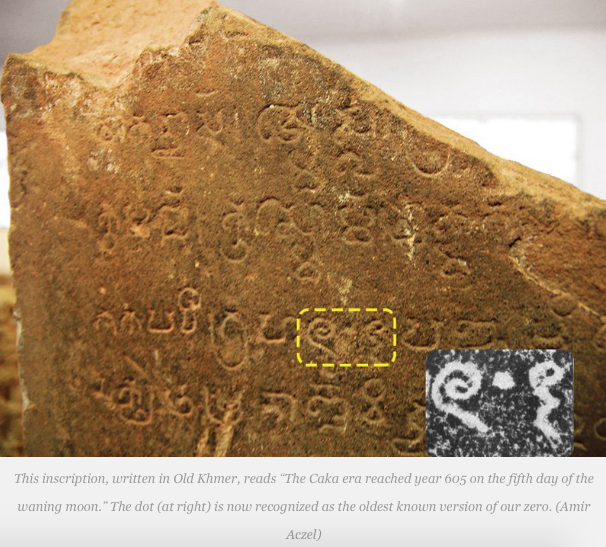 Many researchers believed  that the zero was an Arab invention, some even proposed that it was somewhere in Europe where the number zero was first used. Some scholars trace the number Zero origins to ancient Mesopotamia where Sumerian scribes used spaces to denote absences in number columns as early as 4,000 years ago. The Babylonians employed a number system based around values of 60. The Babylonian system predates the Greco-Roman letter-based number system. A similar type of symbol was used in the Americas sometime around 350 A.D., when the Mayans began using a zero marker in their calendars. These early counting systems only saw the zero as a placeholder—not a number with its own unique value or properties.

In 1931 French archaeologist Georges Cœdès published an article “A propos de l’origine des chiffres arabes,” Bulletin of the School of Oriental Studies, University of London where he finally provided enough evidence to firmly prove once and for all that the number zero was in fact an Eastern invention.

Cœdès based his study on the discovery of a stone slab that was found in the ruins of a seventh-century temple in a place called Sambor on Mekong, in Cambodia, Cœdès called this stone slab K-127. The number zero, present on this stone slab is the earliest zero to have been discovered. The year of the inscription on K-127 in our calendar would be AD 683., predating the Arab empire and the Gwalior zero, by two centuries.

Given that neither the Romans nor Egyptians used this number, it was believed that the first evidence of the number zero was a circle drawn in Indian temple Gwalior from the ninth century. It was the Hindu Brahamagupta, who lived between 598 and 668, who introduced the number zero as the definition o a zero amount.

In 1931, a French researcher identified a relief  called K-127. K-127 which was identified as possibly being some sort of bill has the number 605 carved on it and determines the year in which it was written, two centuries before the temple of Gwalior; and contemporary Brahamagupta, making it one of the first- if not THE first zero in the history of mankind.

Brahmagupta, around 650 AD, was the first to formalize arithmetic operations using zero. He used dots underneath numbers to indicate a zero. These dots were alternately referred to as ‘sunya’, which means empty, or ‘kha’, which means place. Brahmagupta wrote standard rules for reaching zero through addition and subtraction as well as the results of operations with zero. The only error in his rules was division by zero, which would have to wait for Isaac Newton and G.W. Leibniz to tackle. – Yale Global

Not only is the zero a concept of nothingness, allowing us to algebraically define negative numbers, it is also an important place-holding device, enabling our base-10 number system to work, making it possible to reuse 10 numerals over and over again, placing them in different positions in a number. This is exactly what makes our number system so efficient and powerful. Without that little zero we would be stuck in the Middle Ages. – Amir Aczel

To find the K-127, Amir Azcel searched over 10,000 objects in a warehouse which took years to complete and when he was just about to give up, Amir Azcel found the the famous K-127 stone slab, which has a meter by a meter and a half and even today has the historical inscription clearly visible.