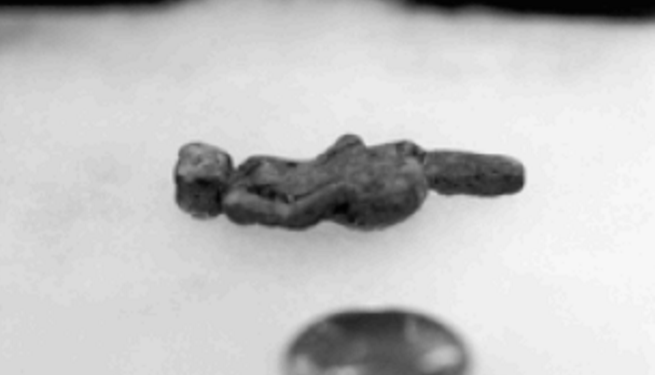 The small figure, skillfully formed in clay has since remained one of the greatest mysteries creating both confusion and amazement among scholars.

In 1912, geologist George Frederick Wright reported the following in his book Origin and antiquity of Man: “The record of the well shows that… they had penetrated first about fifty feet of soil, then about fifteen feet of basalt, and afterward passed through alternate beds of clay and quicksand… down to a depth of about three hundred feet when the sand pump began to bring up numerous clay balls, some of them more than two inches in diameter, densely coated with iron oxide…” (source)

“There is no ground to question the fact that this image came up in the sand pump from the depth reported.”

Wright further writes: “The object is about an inch and a half long, and remarkable for the perfection with which it represents the human form. It was a female figure, and had the lifelike lineaments in the parts which were finished that would do credit to the classic centers of art.” (source)

Wright describes the details of why this figurine is a genuine ancient artifact: In visiting the locality in 1890 I took special  pains, while on the ground, to compare the discoloration of the oxide upon the image with that upon the clay balls still found among the debris which had come from the well, and ascertained it to be as nearly identical as it is possible to be. These confirmation evidences, in connection with the very satisfactory character of the evidence furnished by the parties who made the discovery, and confirmed by Mr. G. M. Gumming, of Boston (at that time the superintendent of that division of the Oregon Short Line Railroad, and who knew all the parties, and was upon the ground a day or two after the discovery) placed the genuineness of the discovery beyond reasonable doubt. (source)

The discovery made in Nampa baffled researchers as the more they analyzed it, the more they were left perplexed by it. In addition to the studies by Wright, Professor F.W. Putnam from the Harvard University concluded through microscopic analysis that quartz grains, discovered under the figure’s arm were cemented by iron molecules. According to researchers, this is important since it indicates the age of the artifact suggesting that it is very unlikely that the figure was created in recent years.

Interestingly, Wright draws connections between the Nampa figurine and similar items discovered in other parts of the world: On comparing the figurine one cannot help being struck with its resemblance to numerous “Aurignacian figurines” found in prehistoric caverns in France, Belizium, and Moravia. Especially is the resemblance striking to that of ” The Venus impudica from Laugerie-Basse,” reported by Hreil and figured in Sollas’s “Ancient Hunters.” (source)

Researchers also discovered that the figurine was colored with iron oxides which are properties belonging the deposits from the 300-foot level from where the figure was recovered from. According to geological evidence, the strata at this depth is believed to be at least 2 million years old.

However, the discovery of the figure, its characteristics and most importantly its age, do not agree with mainstream views of history and evolution. As a matter of a fact, the existence of the Nampa figurine is considered as impossible by most scholars today.

Authors Richard Thompson and Michael Cremo elaborately explain mainstream views about history and evolution in their book The Hidden History of the Human Race (The Condensed Edition of Forbidden Archeology):

“Other than Homo sapiens sapiens, no hominid is known to have fashioned works of art like the Nampa figurine,”

“The evidence, therefore, suggests that humans of the modern type were living in America at the Plio-Pleistocene age which dates about 2 million years ago.”

However, this is considered as controversial given the fact that mainstream theories of evolution tell us that similar artwork was only created by ‘modern humans’ who came into existence approximately 200,000 years ago. Therefore, it is nearly impossible – according to mainstream views– that the Nampa figurine dates back around 2,000,000 years.

In an interview with the Daily Bell, author Michael Cremo explains his view on evolution and history: “… According to that theory, humans like us first appeared on earth less than 200,000 years ago. But because of my familiarity with intelligence work, I realized there might be some facts that were not being included in the textbooks. So I decided to look beyond the textbooks. I started looking at the original scientific reports, in many different languages, from the time of Darwin to the present. When I did that I discovered many reports of discoveries of human bones, human artifacts, and human footprints many millions of years old. I documented those reports in my book Forbidden Archeology.”

Today, the enigmatic figurines remain one of the biggest mysteries fueling debate among researchers with opposing explanations. The Nampa figurine is exhibited at the Idaho State Historical Society in Boise.