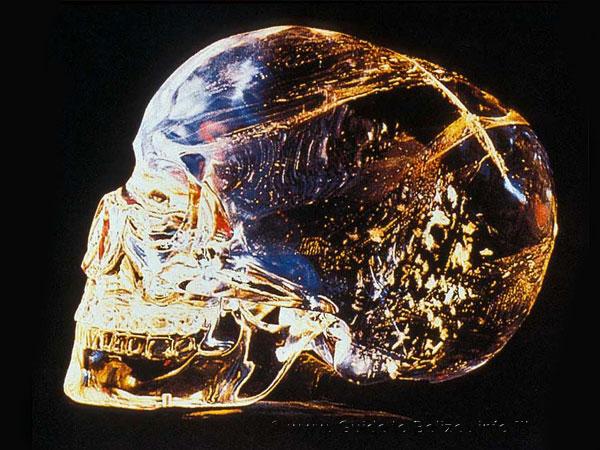 What magical powers lay hidden inside the crystal skulls? Who made these enigmatic objects? When were they created and what were these mysterious items used for?

Many questions hover risen about the many crystal skulls which have appeared at different times in the past couple of centuries, and to answer the questions about these enigmatic objects, a series of myths, legends, hypotheses, and theories have been proposed by different researchers as answers. The truth behind them, however, remains far more mysterious than what we are willing to accept.

Perhaps the most famous crystal skull was discovered in 1924 by Anna Mitchell-Hedges Le Guillen, during an expedition to the Mayan ruins of Lubaantum, located in modern-day Belize, while they were searching for the lost city of Atlantis. Anna Mitchell-Hedges has attested that she, her father, and the others on the expedition at the “lost” city of Lubaantun, “were digging in the temple, moving a heavy wall which had fallen on the altar…. I came upon the skull buried beneath the altar, but it was some three months later before the jaw was found which was about 25 feet away.”

Made of pure quartz crystal, both the mandible and the skull were created from the same rock. Except minor anomalies, the skull is anatomically perfect, possibly representing a female skull due to its smaller size of 12.7 cm in height while its weight is around 5 kg. The prisms located at the base as the hand-polished lenses of the eyes are a combination that produces an incredible shine. The skull, which is perfectly carved out of rock crystal, has a high degree of hardness which, according to scientists, is a seven out of ten on the Mohs scale.

In the early 1970s, his mysterious object was studied by an independent restorer by the name of Frank Dorland, who estimated it would have been chiseled in basic form, using diamonds, and then polished to perfection. According to Dorland, the mysterious crystal skulls it at least 12,000 years old.

Years later, the skull was examined in the laboratories of Hewlett-Packard after which Mayan expert and archeologist Norman Hammond studied it, and warned that the holes showed signs of having been made with metal tools.

F.A. Mitchell-Hedges mentioned the crystal skull in the first edition of his autobiography, „Danger My Ally”, describing it as the “Skull of Doom” as “dating back at least 3,600 years, and taking about 150 years to rub down with sand”; the rock crystal, he exaggerated, was “nearly as hard as diamond.”

“It is stated in legend that it was used by a high priest of the Maya to concentrate on and will death. It is said to be the embodiment of all evil; several people who have cynically laughed at it have died, others have been stricken and become seriously ill.”

Experts from the British Museum were among the several experts who analyzed the skull, dating it to the Aztec civilization around 130 to 1400 AD, but according to the natives who traveled with Mitchell-Hedges to Lubaantum reassure that the “skull of destiny” was at least 4000 years old.

There are other crystal skulls that are displayed at the Museum of Mankind in England and at the Trocadero Museum in Paris, France. Those crystal skulls were discovered by members of the Mexican army in the 1890’s, also carved out of pure quartz crystal, although not as elaborate as the one discovered by Mitchell-Hedges.

The skulls located at the Museum of mankind is considered a “twin” of the skull discovered by Mitchell-Hedges since they are almost identical except for one detail. The Mitchell-Hedges skull, has a hinged jaw, as in a real skull; while the one displayed in England, has a fixed jaw.

Many authors have many theories. There are some who link the mysterious crystal skulls with traditions and myths from Native Americans while others have linked it to Plato’s mythical Atlantis. None of the theories are scientifically supported but continue to attract thousands of people around the world, demonstrating that, whether or not pre-Columbian, and whether or not fitted with magical powers, the enigmatic skulls have an undeniable magnetism that has attracted the curiosity of explorers and researchers alike.