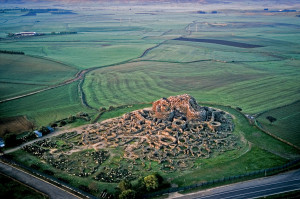 Homer talks of Poseidon lashing out, Plato refers to a massive marine disaster. What happened on Sardinia in the second millennium BC? What dramatic event swept away the Tyrrhenian civilisation and the “tower builders” cited by Strabo and the poet Hesiod in antiquity? Was it an earthquake or a tidal wave? A comet? Was it punishment meted out by Zeus, as Plato suggests in Critias, acting pitilessly to improve the behavior of these people who had been spoiled by living in a land where it was always spring? Certainly they occupied a beautiful, fertile island, endowed with all sorts of metal, both hard and malleable, such as zinc, lead and silver.

Writer and journalist Sergio Frau, one of the founders of Italian daily La Repubblica, has been investigating the subject for more than 10 years, drawing on the texts of the ancients. A dozen or so Italian scientists joined him when he visited Sardinia in early June. They included historian Mario Lombardo; archaeologist Maria Teresa Giannotta; Claudio Giardino, a specialist in ancient metallurgy; cartographer Andrea Cantile; archivist Massimo Faraglia; and Stefano Tinti, a geophysicist and expert on tidal waves.

The aim was to air hypotheses just before an exhibition entitled Big Wave: The Mythical Island of Sardinia opened at the museum in Sardara. Le Monde followed them through the fragrant brush, heavy with the smell of myrtle, artemisia, rock rose and rosemary, seeking out the shade of twisted old olive trees and cork oaks, climbing to hilltop where the remains of ancient megalithic edifices found in Sardinia lie hidden. 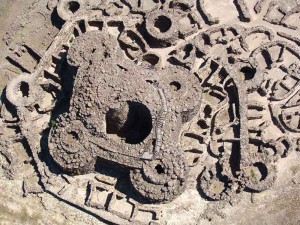 Sardinia might be Plato’s island of Atlas, or in other words Atlantis, which the Greek philosopher placed beyond the pillars of Hercules, the strait between Sicily and Tunisia. Herodotus and Aristotle shared this view, which contradicts the idea that the term refers to the strait of Gibraltar, as was commonly supposed from the third century BC onwards. Frau, too, holds this conviction. Seen from the air the southern end of the island resembles “a marine Pompeii submerged by mud”, he says. Digging into this mud turns up ceramics, cups, pots, oil lamps, sharpening stones, metal implements, knives, chisels, needles and arrow tips, all mixed up, as if the people had been forced to drop everything and run. These remarkable archaeological finds attracted very little attention until the mid-20th century. For good reason, though. For about 3,000 years the island seemed to be under a curse, a prey to malaria until 1946-50 when the Rockefeller Foundation experimented with the use of DDT for eradicating the mosquitoes that carried the disease. We now know that thousands of nuraghi – megalithic fortresses with a central tower – are scattered all over the island. They date from the middle of the bronze age, between the 16th and 12th century BC. In Medio Campidano province, in the south, they have vanished under piles of earth covered in vegetation. Only the ones on high ground, over 500 metres, have been spared. In the past 20 years the number of registered structures has risen from 9,000 to 20,000.