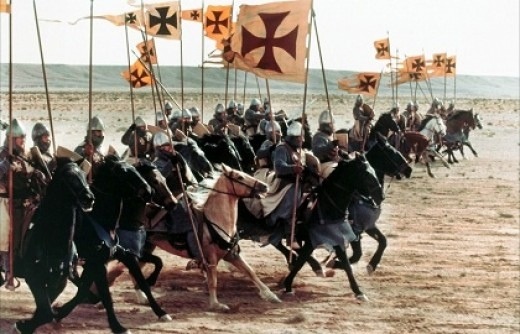 The Knights Templar were a religious military order formed in 1119 AD to protect Christian pilgrims on their journey to holy lands of the Middle East. They established their headquarters on the side of the Temple Mount in Jerusalem and were declared a charity by Pope Innocent II.

Over the decades donations from patrons made the Knights Templar the wealthiest and most powerful military order in Europe. They invented an early form of banking which made them even richer but unpopular with people who had borrowed money. For nearly two hundred years the Templars amassed a fortune in lands, castles, gold, silver, jewels and precious objects.

By 1291 AD the military prestige of the Knights Templar had failed and they were forced out of the Middle East. Their popularity fell further urged on by those who owed them money such as Phillip VI the King of France. On Friday the 13th of October 1307, and with the permission of the Pope, Phillip VI arrested the key leaders of the Order based in France and tortured them into confessions of heresy and devil worship. He seized their lands and raided the treasury but found it much emptier than expected.

Across the rest of Europe the remaining Knights seem to have moved swiftly to hide their portable treasure. A month later Pope Clement II issued the ‘Pastoralis Praeeminentiae’ which instructed heads of state to arrest all Templars and seize their possessions which were to be given to another religious order – the Knights Hospitaller. This was only partially carried out but it was already too late. The vast treasure of the Knights Templar had largely disappeared and has never been found.

An equally intriguing mystery is what happened to the majority of Knights who were never arrested. At least several thousand men as well as a flotilla of ships simply vanished. In particular, 18 ships that had been berthed at La Rochelle, France, on the night of the 12th of October 1307 set sail under the cover of darkness just before the initial persecutions and passed out of history.

A document, the Pergamino de Chinon, found in the Vatican archives in 2002 now shows that Pope Clement II actually absolved the Templars in 1308 AD.

Treasure: The Treasuries of the Knights Templar