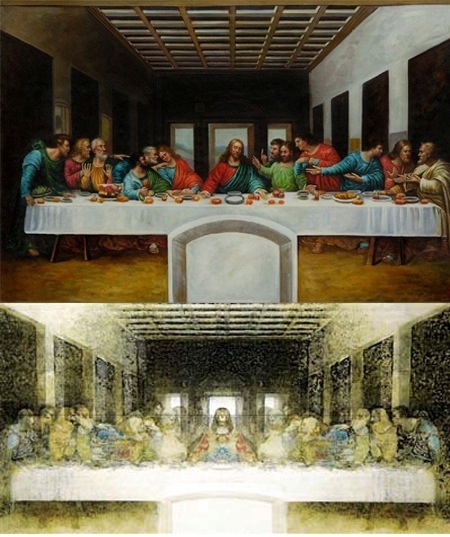 “The Last Supper” has also been the target of much speculation, usually centered around supposed hidden messages or hints found within the painting.

Slavisa Pesci, an information technologist, created an interesting visual effect by overlaying a semitransparent, mirrored version of the painting on top of the original. The result is that two figures that look like Templar knights appear at both ends of the table, while someone who is possibly holding an infant stands to Jesus’ left.

Giovanni Maria Pala, an Italian musician, has also indicated that the positions of hands and loaves of bread can be interpreted as notes on a musical staff, and if read from right to left, as was characteristic of Leonardo’s writing, they form a musical composition.

Sabrina Sforza Galitzia, a Vatican researcher, claimed to have deciphered the “mathematical and astrological” puzzle in Leonardo’s “The Last Supper.” She said that he foresaw the end of the world in a “universal flood” which would begin on March 21, 4006 and end on November 1 that same year. She believed that this would mark “a new start for humanity.”