Is The Key To The Universe Wedged Inside Your Brain? – Project Yourself Skip to content
Black Friday Sale - UP to 30% OFF + FREE GIFT
FREE DOMESTIC SHIPPING OVER $50
PROJECT:YOURSELFCrystal Quality Guarantee

Squint your eyes a little, and check out this raisin-sized gland inside your brain:

Would you believe me if I told you that this tiny, unassuming organ…

May be the gateway to your highest potential as a being of infinite power?

As you may have already deduced, it’s not a misplaced honey roasted peanut: it’s your pineal gland.

The famed psychic Edgar Cayce once said, “Keep the pineal gland operating and you won’t grow old – you will always be young.”

Why? The truth may surprise you.

The pineal gland is an endocrine gland located at the very center of your cranium. On a physiological level, it is activated by light, and works with your hypothalamus gland to regulate your hunger, thirst, sex drive and biological clock (which explains Mr. Cayce’s quote).

The pineal gland also regulates some of your body’s most important chemicals… including the “happy chemical” serotonin and the free radical-busting antioxidant melatonin (which also regulates your sleep patterns).

It’s clear that this organ plays a crucial role in your physiological well being… but where it gets even more fascinating is the role it plays in your spiritual evolution!

There is one problem though:

Factors like our modern lifestyles… consumption of spirit-crushing chemicals… and a lack of proper education… have left our pineal glands atrophied, dormant, calcified and oppressed to the point of uselessness.


(More on that shortly)

Here are some fascinating facts about this Little-Gland-That-Could:

* The pineal gland is formed at 49 days within the human embryo: the same time that Tibetans believe it takes for a soul to reincarnate. And the same amount of days that the human embryo becomes either male or female. Hmmm…

* In the ancient Vedic energy system of the chakras, the pineal gland is referred to as the ‘Ajna’ or ‘3rd Eye’ chakra. Modern studies reveal that the gland’s watery interior contains rods and cones – just like those found in the retina of your eyes! That’s right, your ‘3rd eye’ has a structure remarkably similar to your two physical ones. This is why when you visualize something strongly enough, you can literally see it “in your mind’s eye.”

* Studies show your pineal gland secretes a substance called Dimethyltriptamine (DMT), which you may be familiar with as a hallucinatory substance found in the South American shamanic brew called Ayahuasca. The interesting thing about DMT is that it causes experiences which can take you well beyond common states of awareness. This is perhaps why the pineal gland is known in many cultures as the ‘Seat of the Soul’, the ‘Gateway to the Universe’, the ‘Mind’s Eye’ and the ‘Doorway to Higher Realms’.

* Your pineal gland is also important to your physical and mental health, and its wellbeing has been linked to memory, creativity, intuition and critical thinking skills. It is also sensitive to light and plays an important role in your sleep and waking cycles. When light strikes the retina of your eyes, it travels through a tiny nerve system and into the gland. When the light goes off – like at night – it sends a signal to the pineal to begin secreting melatonin, which activates your nervous system to go into sleep mode.

“Wow Amish, I never knew that! But why are you bringing this up now?”

Glad you asked. The biggest reason I humbly suggest you get on a first-name basis with your pineal gland is because this tiny organ is vital for awakening your superhuman, reality-bending powers.

Here’s why, and bear with me…

The characteristics of your pineal gland make it the strongest candidate for being that elusive point that connects your physical form to your infinite consciousness.

The being that you know as ‘YOU’, is therefore a bridge between the tangible, physical world you can see, smell, touch and hear… and the unseen world of collective consciousness: the source of infinite creativity, intuition, energy and connection.

Know what else has been identified as a bridge to this unseen world? This 12,000-year-old symbol known as the Sri Yantra: 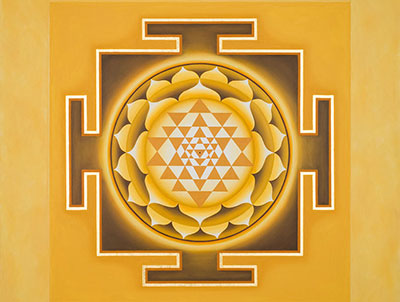 The Sri Yantra is a symbol of immense power…

Partly because when you meditate for prolonged periods on it, it STIMULATES your pineal gland by altering the shape of your brain… and increasing alpha brain wave activity (and this is not speculation – it’s based on controlled EEG studies at Moscow University!).

The Sri Yantra and the pineal gland go hand-in-hand in awakening your reality-bending powers. They complement and serve each other, and harnessing them in tandem could be the most important thing you ever do for your superhuman self

Okay, so that was the good news. Now here comes the challenge:

Your modern lifestyle may have pushed your pineal gland to the brink of ruin!

fluoride in our water and toothpaste, heavily processed food, and various chemicals in our GMO-heavy diets.

The result? All its important mind-body-spirit functions get sabotaged – leaving you feeling intermittently tired and cranky, unproductive and uninspired, and disconnected from your highest spiritual potential.

And so one of our many missions is to help you de-calcify your pineal gland… and uncork all that dormant potential that’s been swirling around inside you.

Here are a few ways to start decalcifying your pineal gland:

And that last point in particular, is what we’re going to help you with over the next few days.

But for now, it’s your turn in the comments section below:

What’s the BIGGEST contribution you will make to yourself and the planet once you can finally tap into your reality-bending superhuman powers?