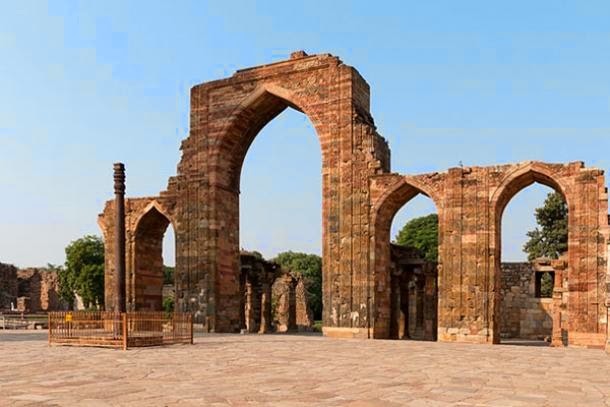 Standing at the center of the Quwwatul Mosque the Iron Pillar is one of Delhi’s most curious structures. Dating back to 4th century A.D., the pillar bears an inscription which states that it was erected as a flagstaff in honour of the Hindu god, Vishnu, and in the memory of the Gupta King Chandragupta II (375-413).

How the pillar moved to its present location remains a mystery. The pillar also highlights ancient India’s achievements in metallurgy. The pillar is made of 98 per cent wrought iron and has stood 1,600 years without rusting or decomposing.

Take the case of the Brahmi inscription alone. Readings of this six-line, three-stanza inscription in Sanskrit verse vary considerably, the one most often published being that by Fleet, who translated it in 1888.

It speaks, in very poetic terms, of the powerful, all-conquering monarch who had the pillar made: “He on whose arm fame was inscribed by the sword, when in battle in the Vanga countries, he kneaded (and turned) back with (his) breast the enemies who, uniting together, came against him; … he, by the breezes of whose prowess the southern ocean is even still perfumed.”

But, this eloquent panegyric apart, when it comes to identifying the king with clarity, and giving further details about the erection of the pillar, the inscription suddenly leaves some questions unanswered: obviously, not for those who lived in those early times, but for later generations, for whom so much information was lost in the centuries that have gone by.

Thus, the verse concludes with the words: “He who, having the name of Chandra, carried a beauty of countenance like (the beauty of) the full moon, having in faith fixed his mind upon (the God) Vishnu, (had) this lofty standard of the divine Vishnu set up on the hill (called) Vishnupada.”

But who exactly was King Chandra remains a puzzle.

On other grounds, historical or paleographic, it can be concluded that the pillar belongs to the Gupta period, but, from among the imperial Guptas, who is it that is referred to here simply by the name of ‘Chandra’: Chandragupta I, Chandragupta II, also celebrated as Vikramaditya, or, as some firmly believe, Samudragupta? Again, the Guptas were known to have been devotees of Lord Vishnu, but where was this hill called ‘Vishnupada’ located?

In a report published in the journal Current Science, R. Balasubramaniam of the IIT Kanpur explains how the pillar’s resistance to corrosion is due to a passive protective film at the iron-rust interface.

The presence of second-phase particles (slag and unreduced iron oxides) in the microstructure of the iron, that of high amounts of phosphorus in the metal, and the alternate wetting and drying existing under atmospheric conditions are the three main factors in the three-stage formation of that protective passive film.

Many theories have been put forward from time to time to explain the rust-free state of the pillar.

For example, the site of the pillar is away from industrial areas and the climate of Delhi is fairly dry. 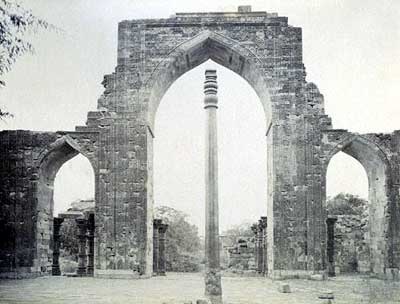