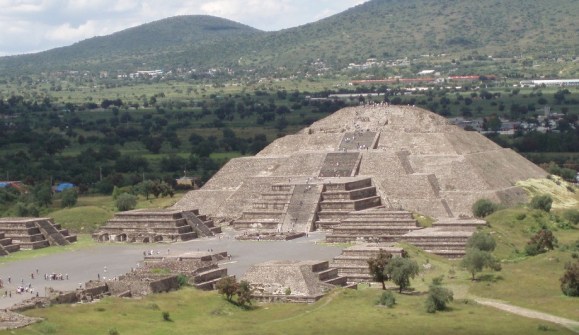 Central Mexico, 35 miles northeast of Mexico City, in a highlands plateau, lies the enormous archaeological site of the ancient city of Teotihuacan. Established around 100 B.C., and lasting until its fall between the seventh and eighth centuries, Teotihuacan was one of the largest cities in the ancient world, with over 150,000 inhabitants at its peak. As you walk through the city you notice immediately the difference compared to other ancient cities. Teotihuacan is amazing, it has this advanced but ancient felling in it. Teotihuacan has a modern city layout, you have a Street of the Dead that goes for miles, along which you have all of the major ceremonial architecture, including some of the largest buildings ever erected in the New World.

According to archaeologists the advanced design of Teotihuacan suggests that ancient builders had knowledge, not only of architecture, but of complex mathematical and astronomical sciences, and one of the things that is just incredibly amazing and different from all other ancient sites is the fact that from the air, Teotihuacan‘s city layout strangely resembles a computer circuit board with two large processor chips— the Sun Pyramid and the Moon Pyramid. Researchers have also found numerous and remarkable similarities to the Great Pyramids of Egypt.

As you can observe, the layout of the three main pyramids in Teotihuacan incredibly resemble a modern day circuit board with processors, and this detail is unique to Teotihuacan and like many other details can only be appreciated from the sky, and we know that the placement of these ancient monuments was not random and had mathematical, geometrical and geographical influence.

Is it possible that in the city layout of Teotihuacan a hidden Pyramid code is waiting to be found? 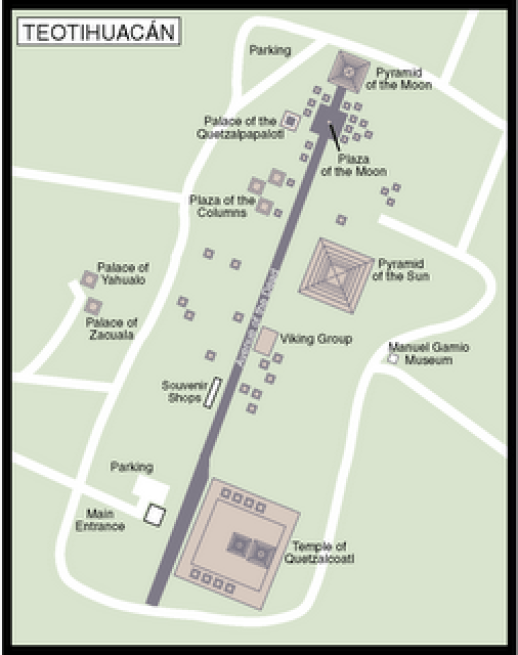 Researchers have also found numerous and remarkable similarities to the Great Pyramids of Egypt. The Great Pyramid of Khufu at Giza and the Sun Pyramid at Teotihuacan apparently have about the same base almost 750 feet square.

The Pyramid of the Sun is exactly half as tall as the Pyramid of Giza and the Temple of the Sun, the Temple of the Moon, and the Temple of Quetzalcoatl are in the same layout as Orion’s Belt, which is basically the formation in which the three pyramids of the Giza Plateau have been laid out into as well so this is just too complex to be just a coincidence as some researchers refer to. You have an ancient civilizations in Egypt and you have another in Central Mexico, separated by over seven thousand miles, yet they have constructed their monuments in such alignment to Orion’s constellation that it leaves researchers, archaeologists and scientists baffled.

You can try to explain this but you cannot come to a logical conclusion other than that these civilizations had to have been connected in some way.

One of the most interesting things about Teotihuacan is the finding by archaeologists of the extensive use of mica embedded in numerous structures. This mineral is found 3,000 miles away in Brazil and it is found in all buildings, housing complexes, temples and along the roads so basically this mineral is all over Teotihuacan. The pyramid of the Sun in Teotihuacan contained considerable amounts of mica in layers up to 30 cm.

Human use of mica dates back to prehistoric times. Mica was known to ancient Indian, Egyptian, Greek and Roman and Chinese civilizations, as well as the Aztec civilization of the New World. The earliest use of mica has been found in cave paintings created during the Upper Paleolithic period (40,000 BC to 10,000 BC).

Obviously Mica was not incorporated to these constructions for decoration purposes because you couldn’t see it, so it is clear that this mineral was incorporated into these monuments for another purpose.

Mica is stable when exposed to electricity, light, moisture, and extreme temperatures. It has superior electrical properties as an insulator and as a dielectric, and can support an electrostatic field while dissipating minimal energy in the form of heat; it can be split very thin (0.025 to 0.125 millimeters or thinner) while maintaining its electrical properties, has a high dielectric breakdown, is thermally stable to 500 °C, and is resistant to corona discharge. Muscovite, the principal mica used by the electrical industry, is used in capacitors that are ideal for high frequency and radio frequency. Phlogopite mica remains stable at higher temperatures (to 900 °C) and is used in applications in which a combination of high-heat stability and electrical properties is required. Muscovite and phlogopite are used in sheet and ground forms.

So we know that Mica was not used for aesthetic purposes so they must have had a very specific and good reason to incorporate it, they clearly knew of the characteristics of this mineral. Teotihuacan, a marvel of ancient engineering.