Searching for the next Dead Sea Scrolls ahead of thieves: Dust to dust – Project Yourself Skip to content
Black Friday Sale - UP to 30% OFF + FREE GIFT
FREE DOMESTIC SHIPPING OVER $50
PROJECT:YOURSELFCrystal Quality Guarantee 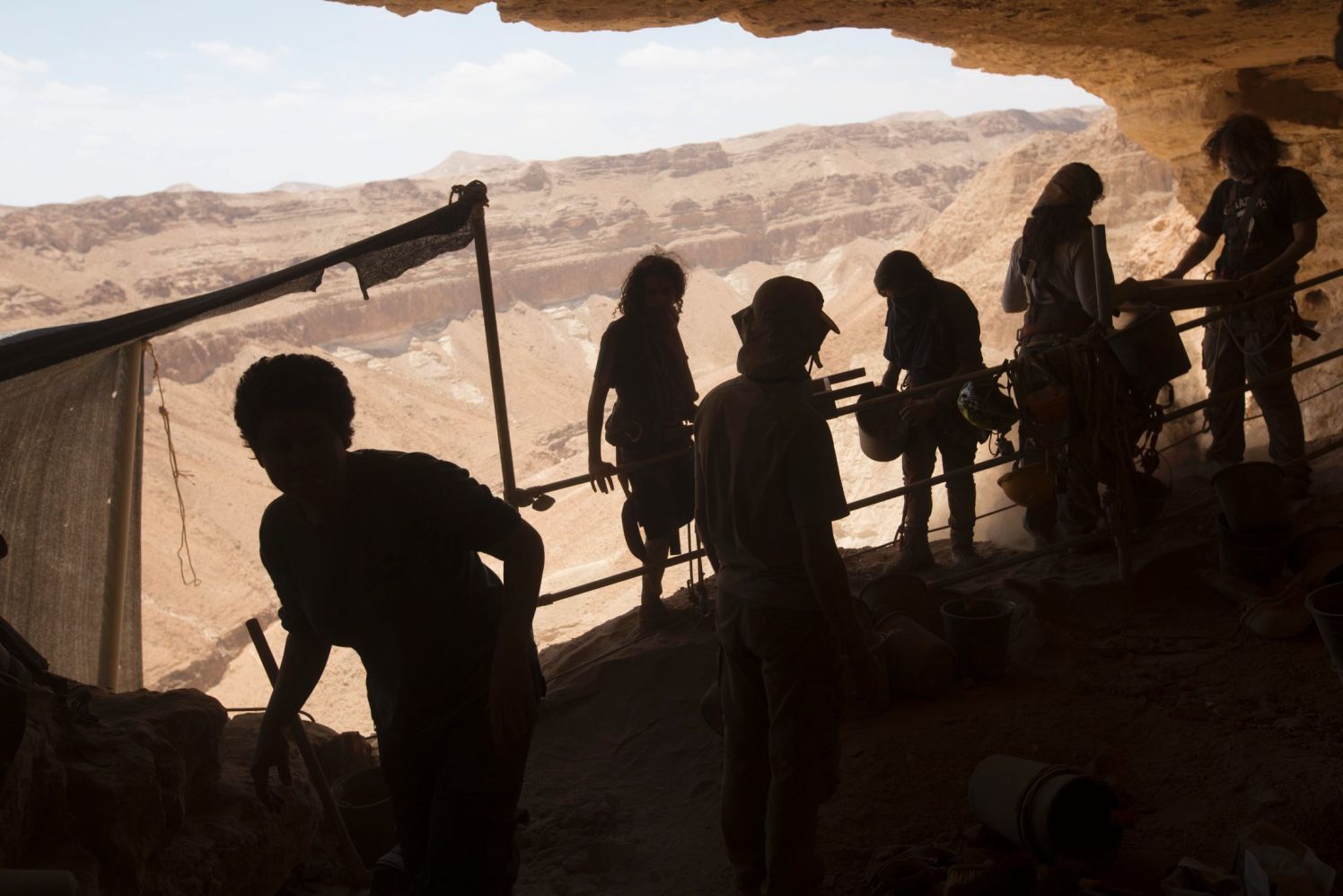 One day in 2009, rumors of an extremely rare archaeological artifact began circulating the antiquities black market: a papyrus bearing 15 lines of Hebrew writing. If it actually existed, the artifact must have been looted from an archaeological site somewhere in the Judean Desert. Always keeping its ear close to the ground, so to speak, the Israel Antiquities Authority heard the whisper and fielded an undercover agent posing as an American buyer.
It took three months for the faux Yankee to win the trust of the thieves, and for them to remove the papyrus from its hiding place and show it to him. Finally, they brought it in all its glory to their fourth meeting, in the lobby of the Hyatt Hotel in Jerusalem. The agent, meanwhile, brought a suitcase ostensibly containing $2 million in cash. When satisfied that the thieves had brought along the real deal, he raised a hand to his hat brim and the police forces pounced, arresting the sellers and seizing the papyrus.
Asked where the papyrus had come from, the thieves answered, “Wadi Tziel” (also known as Wadi Tze’elim) – among the larger of the desert’s water courses. The item, says the IAA, dated to 139 C.E. and had apparently been found in one of the desert’s many caves.

Five years later, in November 2014, the rescue unit from the city of Arad was holding an exercise in Wadi Tze’elim. The unit split into three groups. One marched down the stream, while the other teams walked along each of the waterbed’s banks. One of the men had just bought a new camera and was taking pictures of his teammates a couple of kilometers away. Messing about with his zoom, he noticed what looked like a person hiding in a cave beneath the rescue group he was photographing.
Commando archaeology
This was not just any cave, but a famous site with a few names. Mostly it’s called the Cave of Skulls, because it was in this hole in the cliff face, about 250 meters (820 feet) above the waterbed, that seven skeletons were found, apparently dating from the Bar Kochba revolt (133-135 C.E.). Some 2,000 years later, the rescue team figured that anybody lurking in the cave was a thief, and so alerted the IAA theft squad.

TAKING SCARF MEASURES: A digger tries to cope with the dust at the Cave of Skulls. Tomer Appelbaum 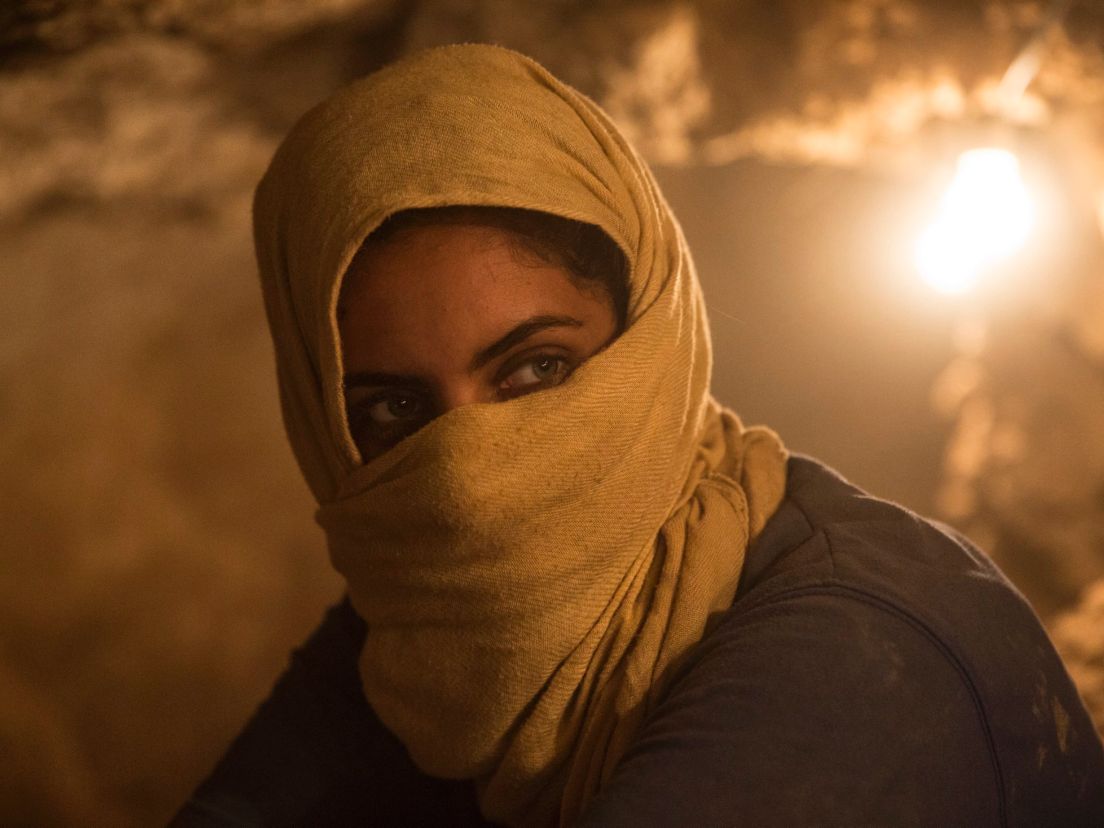 The antiquities cops and regular police lurked in turn to ambush the thieves climbing to the cave from the wadi. Within minutes the handcuffs were on, says archaeologist Amir Ganor of the Robbery Prevention Division.
Clearly, thieves believe that archaeological sites in the Judean Desert have not surrendered all their treasures, especially from the caves along Wadi Tze’elim. As a result, a three-week intense excavation began inside the Cave of Skulls recently, even though it’s an extraordinarily hard place to access.
The Cave of Skulls got its name in the early 1960s when archaeologist Yohanan Aharoni discovered seven human skeletons inside it. Aharoni had actually reached the cave on a quasi-military mission to map out the Judean Desert caves, after reports that Bedouin were running around the Old City of Jerusalem hawking stolen pieces of papyrus from “Wadi Tziel.”

The upshot was a joint archaeological-military mission (featuring Golani commandos) that initially had the soldiers bemused. “But once they saw what we were bringing out from there, they got excited. The job was a terrible one. It was very dangerous to drop down to the caves by rope [from the cliff top], but we made extraordinary finds,” legendary archaeologist Joseph Aviram told Haaretz three years ago.
They found a lot of artifacts from the era of the Jewish Revolt against Rome, but Wadi Tze’elim yielded nothing much beyond the original find of the skeletons.
Animal bones and dust 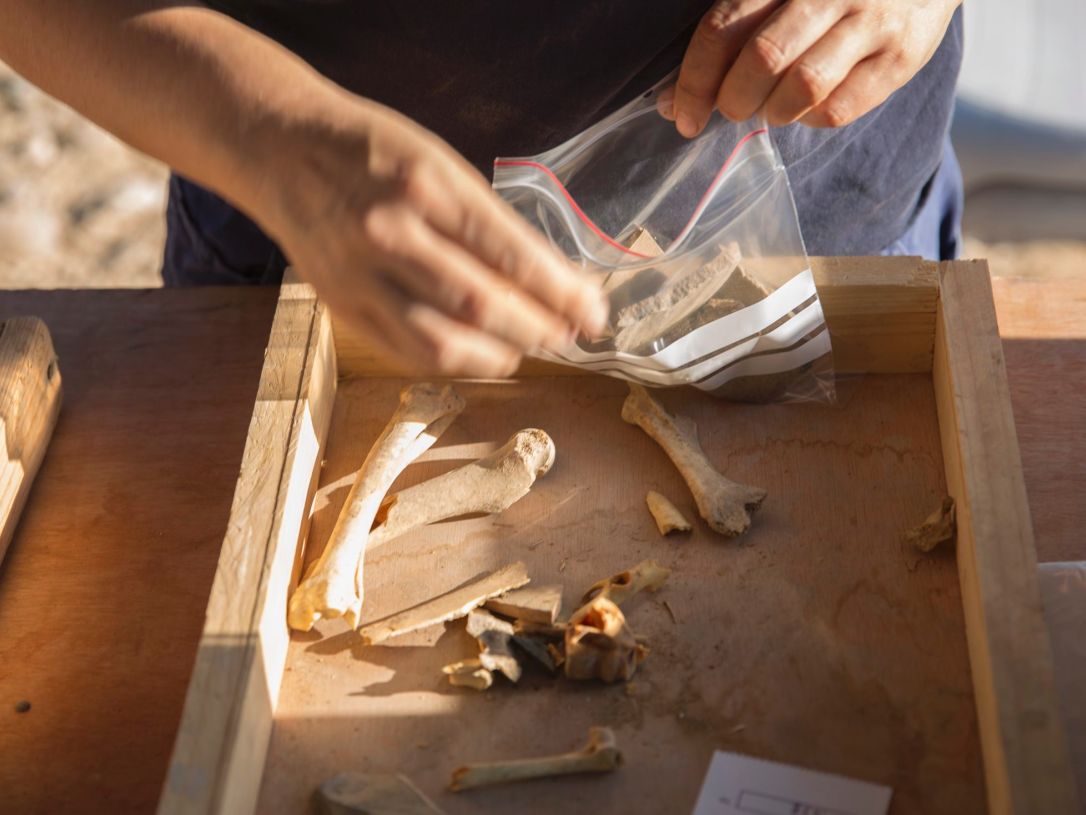 BARE BONES: Examining a find at the Cave of Skulls. Tomer Appelbaum
Some archaeological excavation of the caves has been performed since that initial survey in the 1960s, but most of the diggers in the region are thieves – Palestinians from the Hebron Hills helped by Bedouin guides. Now, though, volunteers have been recruited (mainly through social networks) for the three-week expedition. They sleep in a desert camp erected above the cave, and rappel the 80 meters down to it using ladders and ropes set up for the purpose.
The cave itself consists of a restricted space with a low ceiling. The space opens into a number of tunnels. At any given time, about 25 volunteers can be found within the cave.
Some dig through layers of dirt and clear small rocks. Others monkey with big rocks, breaking them down or moving them. The logic of removing rocks from the cave, rather than just moving them, is to dig into the floor and find more things. Frustratingly, the first job is to go through the piles of dirt left by thieves. These tend to be characterized less by wondrous finds and more by cigarette butts and junk-food wrappers. In a corner of the cave, somebody finds a bit of fan that the thieves used as a filter.
Sitting in the cave mouth, secured by ropes, yet more volunteers sift dirt extracted from the cave. The wind blows a lot of what they filter right back into the cave. Such is life. The volunteers and everything else tend to get covered in suffocating layers of dust.
Armed with their filters and buckets the diggers have made quite a few discoveries, including pottery sherds, animal bones, combs, arrowheads, seeds and fruit pits, bits of leather, remnants of textiles – and fragments of papyrus. None have contained writing. Yet. 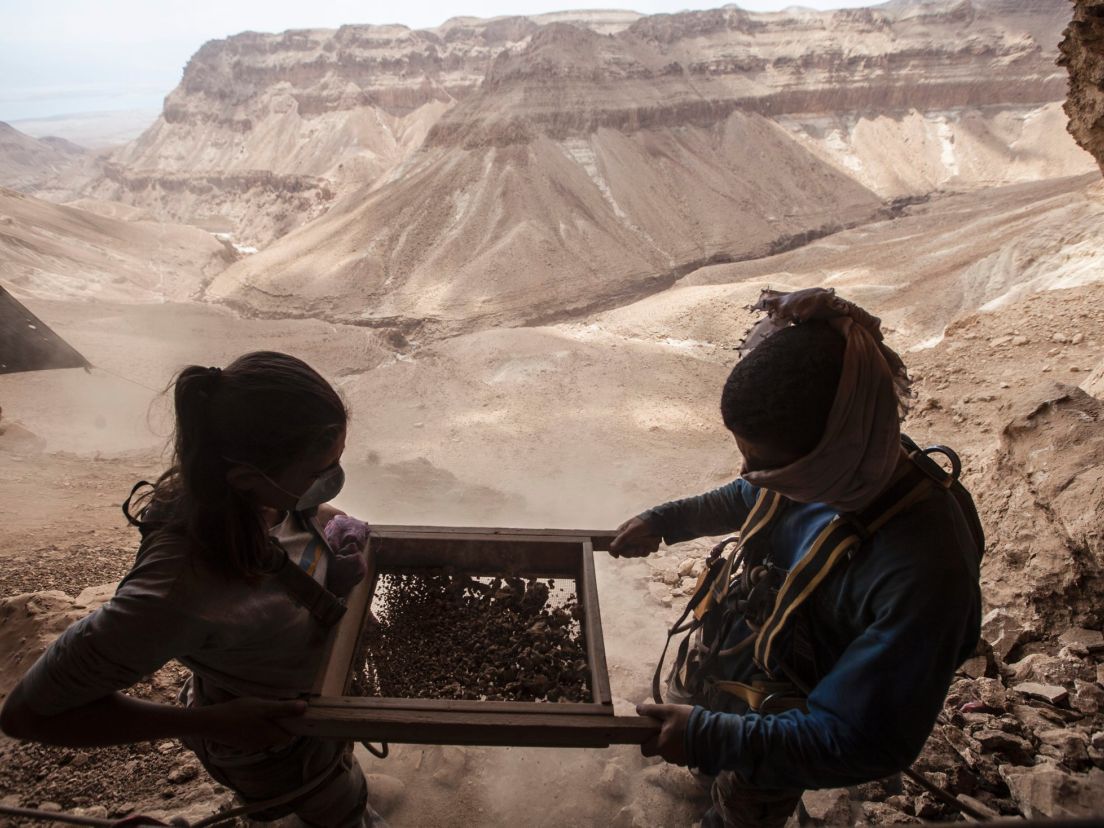 Dig the View: The archaeological search at the Cave of Skulls in the Judean Desert. Tomer Appelbaum

In the desert camp above the cave, the IAA’s Dr. Yael Abadi Rice classifies and catalogs the finds, relating them to two basic periods in the cave’s history: Chalcolithic (or the Copper Age, around 6,000 years ago); and the Great Jewish Revolt, in the second century C.E.
Inconvenient truths in ancient Hebrew?
One of the team’s missions is to determine whether the piece of papyrus with Hebrew script found in 2009 really did come from the Cave of Skulls. If it did, some pesky questions are begged, archaeological and historical. The papyrus bears the Hebrew words “Four years since the destruction of the House of Israel” and bears names of Judaic towns south of the Hebron Hills.
The snag is, there were two events of massive destruction – the one in 70 C.E. following the Great Jewish Revolt, and the one in 135 C.E. following the Bar Kochba rebellion. The scientists involved in this endeavor think the latter date is the likelier, mainly because the phrase “House of Israel” isn’t known in the context of the Great Revolt, explains Dr. Roy Porat, one of the archaeologists managing the dig.
If so, this would indicate that Jewish life continued in the area of the south Hebron Hills and the Judean Desert four years after the catastrophic loss to the Romans by Bar Kochba et al. Another hint that life went on is that the skulls giving the cave its name were found in an orderly fashion. Meaning, years after the revolt, somebody came to the cave and made sure the seven bodies were buried correctly. 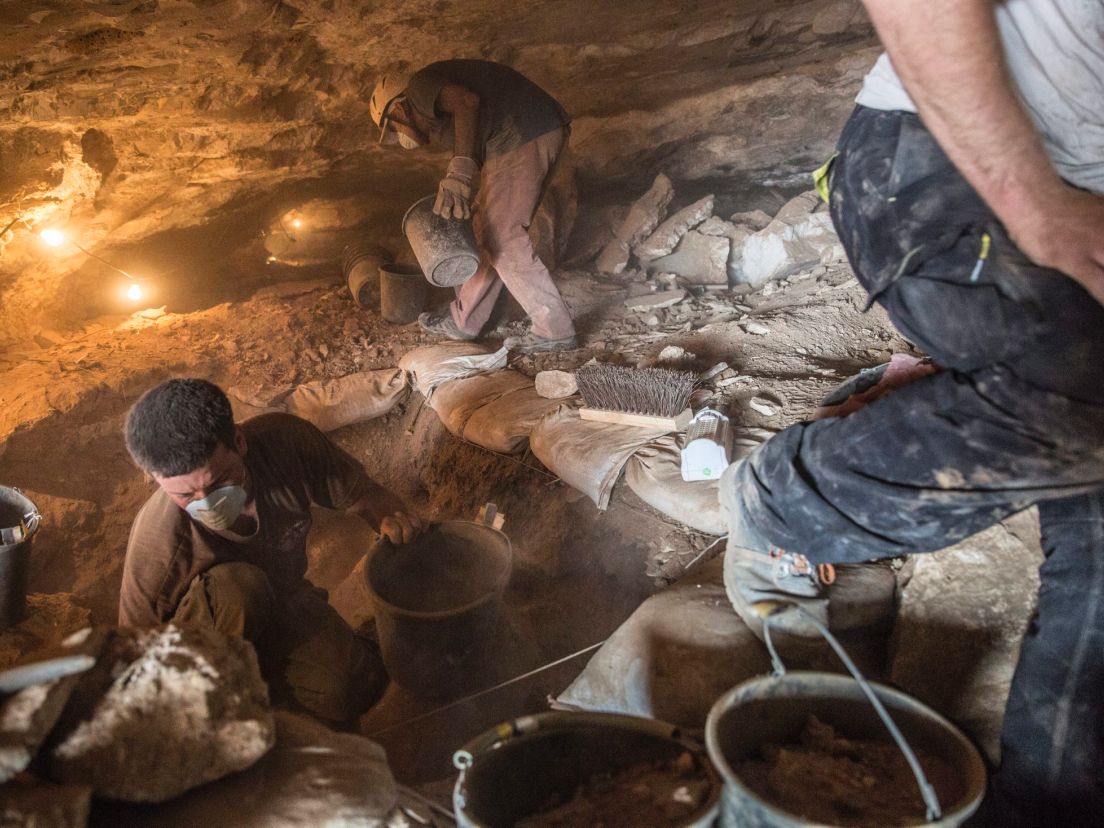 The archaeologists dearly hope that if the papyrus comes from the cave, it’s one of many remaining to be found. The finds from the Chalcolithic era are also baffling. Why would a group of people choose to live in an inaccessible cave, in the heart of the desert, without a reliable water source nearby?

Again, the researchers have to wonder if the dwellers hadn’t fled from something and took sanctuary in this isolated, unfriendly hole in the cliff. “The signs indicate a short stay,” says Dr. Mika Ullman of the Hebrew University of Jerusalem. Whoever had been in that cave left behind no signs of worship, or burial.
This quasi-military mission to find and remove artifacts not yet located by thieves ends in another week or so. The IAA hopes the state will have the nous to allocate a substantial budget to seriously explore the hundreds upon hundreds of caves dotting the desert – whether used as dwellings or as sanctuaries over the millennia.
They need to act before the thieves find them all, leaving behind nothing but plastic fan bits, cigarette butts and evidence of their liking for peanut butter-flavored snacks.