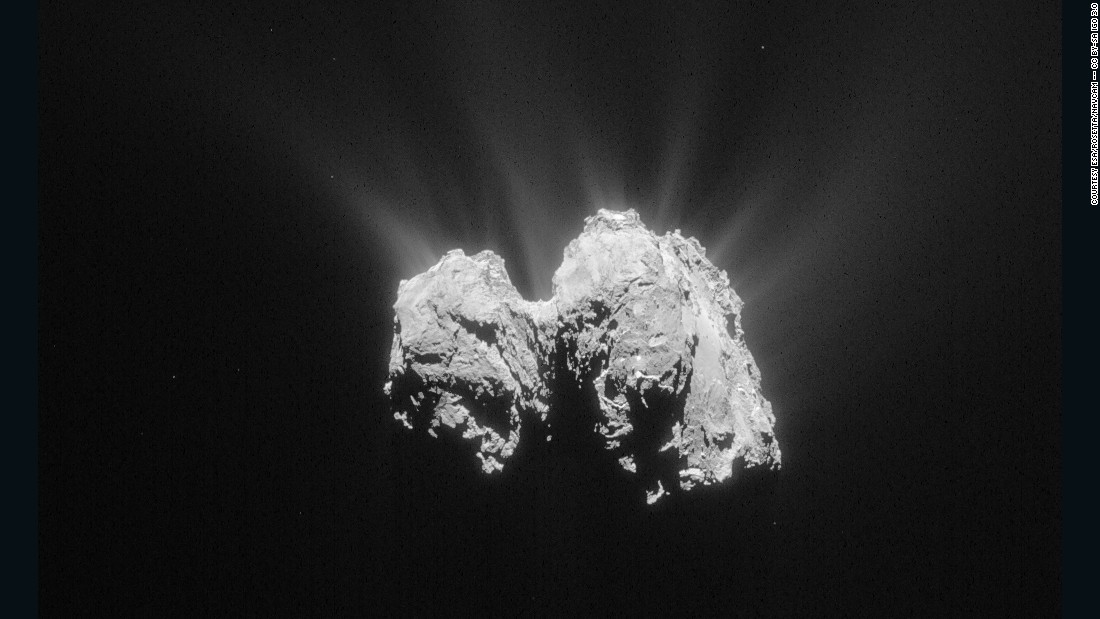 Rosetta’s comet in August 2015, when it was closest to the sun and when most of the glycine was detected.

Ingredients crucial for the origin of life on Earth, including the simple amino acid glycine and phosphorus, key components of DNA and cell membranes, have been discovered at Comet 67P/Churyumov-Gerasimenko.

The possibility that water and organic molecules were brought to the early Earth through impacts of objects like asteroids and comets have long been the subject of important debate.

While Rosetta’s ROSINA instrument already showed a significant difference in composition between Comet 67P/C-G’s water and that of Earth, the same instrument has now shown that even if comets did not play as big a role in delivering water as once thought, they certainly had the potential to deliver life’s ingredients.

While more than 140 different molecules have already been identified in the interstellar medium, amino acids could not be traced. However, hints of the amino acid glycine, a biologically important organic compound commonly found in proteins, were found during NASA’s Stardust mission that flew by Comet Wild 2 in 2004, but terrestrial contamination of the collected dust samples during the analysis could not be ruled out. Now, for the first time, repeated detections at a comet have been confirmed by Rosetta in Comet 67P/C-G’s fuzzy atmosphere, or coma.

The first detection was made in October 2014, while most measurements were taken during the perihelion in August 2015 — the closest point to the Sun along the comet’s orbit while the outgassing was strongest. “This is the first unambiguous detection of glycine in the thin atmosphere of a comet,” says Kathrin Altwegg, principal investigator of the ROSINA instrument at the Center of Space and Habitability of the University of Bern and lead author of the study. The results are now being published in Science.

Primordial chemistry in the ice

Glycine is very hard to detect due to its non-reactive nature: it sublimates at slightly below 150°C, meaning that little is released as gas from the comet’s surface or subsurface due to its cold temperatures. “We see a strong correlation of glycine to dust, suggesting that it is probably released from the grains’ icy mantles once they have warmed up in the coma, perhaps together with other volatiles,” says Altwegg. At the same time, the researchers also detected the organic molecules methylamine and ethylamine, which are precursors to forming glycine. Unlike other amino acids, glycine is the only one that has been shown to be able to form without liquid water. “The simultaneous presence of methylamine and ethylamine, and the correlation between dust and glycine, also hints at how the glycine was formed,” says Altwegg.

Another exciting detection by ROSINA made for the first time at a comet is of phosphorus. It is a key element in all living organisms and is found in the structural framework of DNA and RNA.

“The multitude of organic molecules already identified by ROSINA, now joined by the exciting confirmation of fundamental ingredients like glycine and phosphorus, confirms our idea that comets have the potential to deliver key molecules for prebiotic chemistry,” says Matt Taylor, Rosetta project scientist of the European Space Agency ESA. “Demonstrating that comets are reservoirs of primitive material in the Solar System, and vessels that could have transported these vital ingredients to Earth, is one of the key goals of the Rosetta mission, and we are delighted with this result.”