For many years, locals in Eastern Transbaikalia, a mountainous region to the east of Lake Baikal in Russia told stories about a certain petroglyphs that were hidden in the mountains.
Archaeologists were aware of these tales, but could never confirm the rock art’s existence. It seemed the tales were nothing more than a myth. Now, everything has changed. Scientists have located rare 4,000-year-old petroglyphs that confirm the ancient myth.
An expedition headed by Sergey Alkin, an associate professor and a senior researcher from Novosibirsk State University in Russia managed to discover the exact site and the petroglyph. The ancient artwork’s exact whereabouts is being kept a closely guarded secret, however.
The 4,000 year old drawings were thought to be the stuff of urban myth, with locals of Gorbitsa, which is near the Shilka River, retelling how they were first found by a hunter decades ago and again in the 1990s by a teacher from a nearby village. 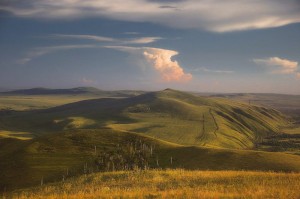 Despite the anecdotal evidence, the incredible red drawings of matchstick men and animals appeared destined to remain lost in the wild and sparsely populated Shilka River basin region. 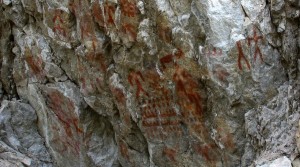 “This image on the Largi River is a very rare thing,” says Professor Alkin. “First of all, the artwork is quite large, with multiple figures. It contrasts against some images of bad quality previously found in the area. Secondly, the petroglyph is very clear and detailed, in a good state of preservation.
This ancient site was first found by a local hunter long time ago. In the 1990s a Viktoria F. Kupriyanova, a teacher from a nearby village Kularki visited the place with her pupils. Later the site was forgotten and locals did not know how to reach the place. Nobody had seen the rock paintings in years, nit until now.
The rock art contains an image of a hoofed animal, presumably a bull and birds.

Bird images are typical for other known petroglyphs in Transbaikalia. An important part of the Largi petroglyph is numerous points and lines. “Such points can be interpreted as a symbol of counting with the painter fixing the number of some objects (say, cattle). As for the vertical lines above a horizontal one, this could be a long boat with people sitting in it. Archaeologists often identify similar images from other regions in such a way; however, in Eastern Transbaikalia it is the only known image of this type,” scientists say.

After comparing the artwork to other ancient pictures found in the Eastern Transbaikalia area, experts believe that it was created during the Bronze Age.
However, a definitive conclusion as to who painted the images remains elusive. Alkin said old tools or weapons found in the vicinity of a find usually give an indication as to what type of people lived in the area, but no such artifacts have been found nearby in this case.
Scientists will now examine the rock ark in detail to establish what substance was used to produce the petroglyphs. This will give a better insight into where the ancient artists might have come from.*