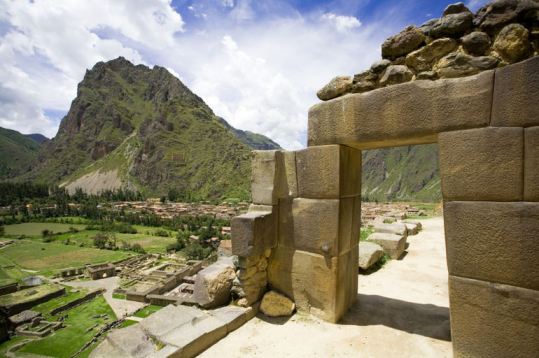 Ollantaytambo is an Inca archaeological site in southern Peru some 60 kilometers northwest of the city of Cuzco. It is located at an altitude of 2,792 meters (9,160 feet) above sea level, Ollantaytambo lies in an area the Inca people once called the Sacred Valley and this marvel of architecture once served as both a temple and a fortress,. Mainstream historians claim Ollantaytambo was built around 1440 AD by the Inca Emperor Pachacuti. Archaeologists today, believe Ollantaytambo was built upon the ruins of a far older city and they are not sure of the origins of that city.

One of the most interesting places in Ollantaytambo is the Gateway of the Gods, which was build several thousand years before the Inca arrived to Ollantaytambo, according to researchers it was built by a culture called the Urin Pacha, that name was given because researchers have no idea who they were where they came from or where they went. It is clearly evident that the earliest parts of Ollantaytambo dates to at least 12,000 years old, if not older.

“From the research, I have been able to determine this was built by the Arak civilization. The Arak people are as ancient as what would be the equivalent to Adam or the first humans.” – Jesus Gamarra

Ollantaytambo is a marvel of engineering and architecture, its a fortress, complex city and many question have been raised throughout history regarding the construction of this ancient site. Today one of the most asked question probably is in regard to the incredible sized blocks of stone that were used in the construction. Some of these over-sized rocks are found at the highest levels of Ollantaytambo, particularly six of these monoliths that are placed in a line, according to researchers they were brought to Ollantaytambo from another mountain, across the plain, river and then they were brought up the mountain. So now the question is HOW DID THEY DO THAT? How did the ancients manage to first of all, cut these rocks out of the mountain, than transport the across the plains, bring these heavy stones across the river and then bring them up and position them up the mountain?

According to many archaeologists who have had the pleasure of examining these incredible ruins, the ancient builders of Ollantaytambo managed to accomplish these precision cuts and shapes with the use of rock and bronze tools. In my personal opinion I find it hard to believe that stones, that have almost perfect angles and in some cases are as smooth as glass were manipulated ONLY with the use of said tools, because it is something that we today would have trouble recreating with our modern day equipment. Engineers and logistic experts have said that to move some of the stone blocks from Ollantaytambo (and some of them weigh over 50 tons) we would need several power tools and different power vehicles. It is not that easy to bring up a stone block that weighs 50 tons up a mountain, and to think that this was accomplished without the aid of some sort of technology is just illogical. The one thing that is strange is that even though archaeologists say that bronze and stone tools were used to shape these rocks, no evidence of said tools has been found yet at the site so the question still remains, how was this accomplished? 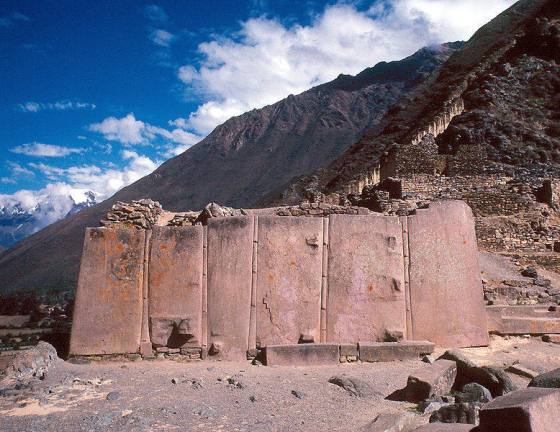 What is even a bigger mystery is the way the ancient builders at Ollantaytambo managed to put together all of these rocks after cutting, transporting and shaping them. The stones at Ollantaytambo are so perfectly put in place that you cannot insert a piece of paper in between them, they are locked into place in a way that just defies all logical explanation, it is simply amazing how they managed to do this. When you look closer at the stone placement at Ollantaytambo, the stones seemed to be put in place by some kind of extreme heat source that was able to soften the stones and then allow them to adjust and fit perfectly into place. 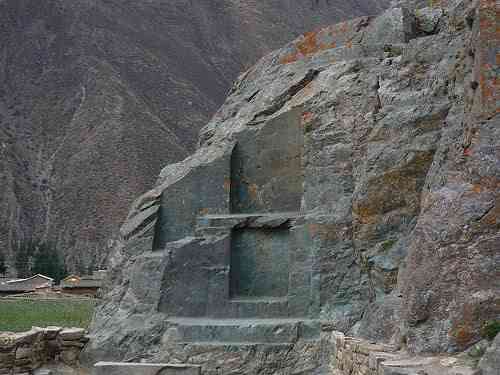 At the temple of the Condor we find more incredible evidence of the use of advanced technology in the construction process.

At the temple of the condor we find that enormous slabs of andesite rock that were quarried from what is known as “The Wall of Living Rock.” Here we find these blocks that were removed in such a precision that we hardly find scratches, the material from where the slabs were removed is andesite and that material is really strong and hard to “cut”, you would need something that is stronger than andesite to accomplish this.

In my opinion another interesting fact is that these slabs were so precisely removed that we do not find broken edges or any other signs of extreme force applied that could have caused the material to “break” or deform. The corners from where they were removed are not sharp but are almost perfectly round and until today someone has yet to explain how all of this was possible. Another interesting find lay on the bottom from where these rocks were cut out of, we find these strange but precise crisscross pattern. The pattern that we see appears to be a trace left by some kind of machinery that was left behind at the time these slabs were being removed, possibly these marks could have been created by some kind of laser or saw machine, so yes this could be one of the most clear pieces of evidence that the ancients did in fact use some sort of advanced technology at the time they were cutting, removing and shaping these incredible rocks. “The rock surface looks rough but when you touch it it feels as smooth as a bathroom mirror, which means some type of vitrification process was used. At the bottom of where this alcove was cut out, we can see a crisscross pattern, in my opinion, they are actually saw marks, to me, this pattern is irrefutable proof for ancient machining.” – Giorgio A. Tsoukalos 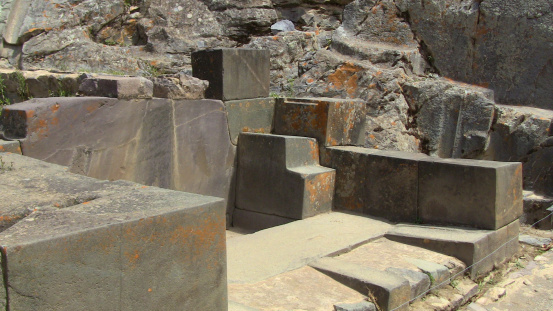 It is really hard to believe that the builders at Ollantaytambo did not have any sort of technology available to them at the time they were cutting and transporting these stones. The “Bronze tool” theory just doesn’t add up. According to the myths of the Andes Mountains the ancient ancestors or founders, were described as a brother and sister referred to as “Children of the Sun.” Sent by the “Sun God,” these mysterious beings arrived on Earth with something described as a golden wedge. What we have here in these stories is in fact a description of some kind of extraterrestrial visitors (yes as they are not from Earth) and it was with the Children of the sun that all of these accomplishments were actually possible.Could it be that the cutting, transportation and placement of these huge rocks was possible thanks to some kind of technology brought and given to the ancestors by these “gods”? All evidence points to a big yes.

There is only a certain amount of what humans can achieve without technology, and in all of our great deeds, that have been written down in history, there seems to be always some kind of technology that has helped us achieve all of our ideas, plans and objectives. It is hard to believe that Ollantaytambo was built without some kind of technology, because there is only so much you can achieve with stone and bronze tools, at some point you would need stronger and bigger tools to achieve precise cuts, removing andesite and transporting rocks that weigh over 50 tons. In our opinion Ollantaytambo is clear evidence of Ancient Aliens helping humans and providing them with the necessary tools to accomplish greater things. What do you think? 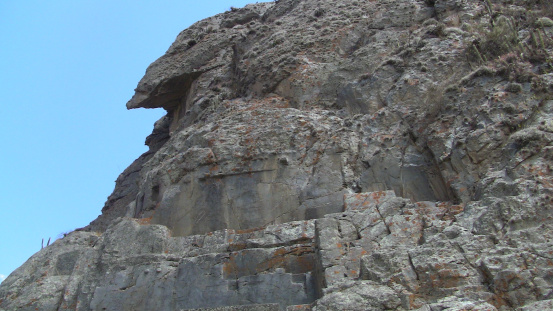