What if, in the distant past, the Nazca lines were used as runways for the Ancient Vimana?

Ever since the Nazca lines and their intricate figures were discovered, people have wondered what their real purpose was. Were these giant figures meant to be seen from above? Do hey mimic constellations in the sky? What were the ancient’s trying to say to future generations? Were the Nazca lines mere ancient art? If so… why would ancient mankind create art that cannot be fully appreciated from the ground? It seems that whatever way you look at the Nazca lines, trying to explain them while maintaining a close mind like most researchers is something impossible. What if the answer to the enigmatic Nazca lines is right in front of us, yet we do not want to accept it?

Not long ago, Professor Masato Sakai, a specialist in Andean archaeology who has been investigating the Nazca lines for over ten years; estimates that about one thousand of the straight lines found at Nazca have expressed, reaffirmed and facilitated communication and links between the villages and people. According to the theory proposed by Professor Sakai, the Nazca lines were produced over a period of about 2,000 years from 400 BC.

While his theory is certainly interesting, it fails to explain the general purpose of the figurines, geometric shapes and giant ‘runways’ on mountains that seem as if their top was literally removed to create a nearly flat surface that strangely mimics modern-day runways. 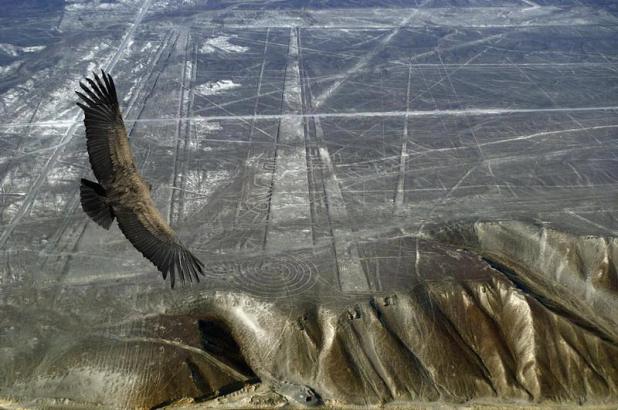 The question is why are we not interpreting the giant lines as what they seem to be… giant runways? Well, first of all that would go against everything we have been told by history in the last hundreds years. Ancient man who inhabited regions of the Americas, Asia and Africa was primitive and not advanced, so the idea that the Nazca lines could have been used as some sort of giant runway sounds ridiculous to those who abide to mainstream historians and archaeologists.

Regrettably, it has been proven that mainstream scholars are very close minded when it comes to sites like the Nazca lines, Puma Punku, Tiahuanaco, Teotihuacan, etc…

An important question we need to ask is, if the Nazca lines were actually ancient art, or a way for ancient man to communicate, than why are there magnetic anomalies present at the Nazca lines? According to reports, scientists from the University of Dresden researched the Nazca lines. They measured the magnetic field and they found changes in the magnetic field under some of the lines at Nazca. Electrical conductivity was also measured at Nazca where tests were performed directly at the Nazca lines and next to them and the results showed that electric conductivity was 8000 higher on the lines than next to them. According to the researchers approx. eight feet beneath some of the lines there are magnetic field anomalies. There is something at Nazca that makes it unique, different from any other place on Earth but we simply do not know what it is.

Ancient texts, specifically from India speak of the ancient Vimana, which are, according to many interpretations the vehicles of the gods who visited Earth in the distant past. These incredible flying machines, believed to be a myth by mainstream scholars, are said to have been able to travel in short periods of time to different places on the planet, the same Vimanas are also said to have the ability to travel from planet to planet.

Aachaarya Naaraayana says, “That which can speed on earth, on water, through air, by its own power, like a bird, is a “Vimana.”

Shankha says, “Experts in the science of aeronautics say, “That which can fly through air from one place to another is aVimana”

And Vishwambhara says, “Experts say that which can fly through air from one country to another country, from one island to another island, and from one world to another world,is a “Vimana“.”

The Vaimānika Śāstra an early 20th-century Sanskrit text on aerospace technology makes claim that he vimānas mentioned in ancient Sanskrit epics were advanced aerodynamic flying vehicles, similar to a rocket capable of interplanetary flight as backed up by the ancient alien theory. The texts were revealed in 1952 by G. R. Josye and contain 3000 shlokas in 8 chapters which Shastry claimed was psychically delivered to him by the ancient Hindu sage Bharadvaja. The propulsion of the Vimanas according to Kanjilal (1985) is by a “Mercury Vortex Engines”, a concept similar to electric propulsion. 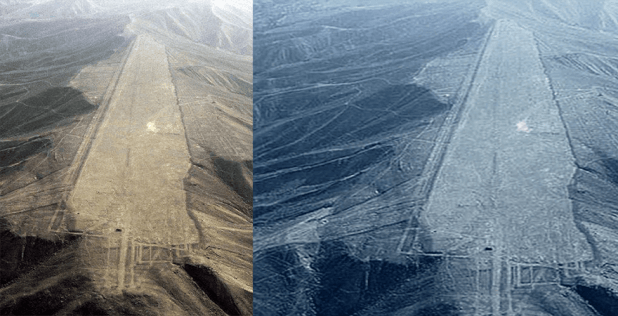 The authors argue that the sage Maharishi Bharadwaj would have described more than 7000 years ago “aircraft traveling between countries, continents and planets.” At the same time, the Vice Chancellor of the University of Mumbai, Rajan Welukar, said that “there is no reason to believe in what they say about the Vedas, but it is something that is worth studying.”

So, what if the giant ‘runways’ that are clearly seen in Peru at the Nazca are in fact ‘navigational markers’ for ancient vehicles such as the Vimana? What if the ‘gods’ used these paths in the distant past to visit the people in Peru? And what if, ancient people created figurines such as the Nazca Astronaut in honor of those “gods” who came from above?

Interestingly, according to some local legends, the mysterious Incan creator god Viracocha, commissioned the Nazca Lines and glyphs in the past. These lines are said to be created by the Viracocha himself. He was the great teacher god of the Andes.

Viracocha was one of the most important deities in the Inca pantheon and seen as the creator of all things, or the substance from which all things are created, and intimately associated with the sea. According to the myth recorded by Juan de Betanzos, Viracocha rose from Lake Titicaca (or sometimes the cave of Pacaritambo) during the time of darkness to bring forth light. 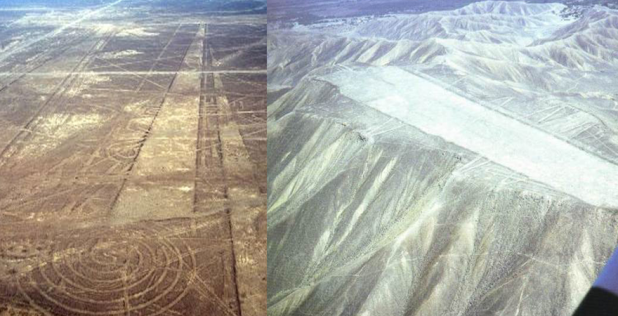 Some of the parts of Nazca have amazing designs, highly accurate triangles that are a mystery. Some of the triangles look like they were made by something that literally pressed the ground down at least 30 inches with incredible force. Could the ancient Nazca have done this? With their feet? How would you press down a six mile “perfect” triangle into the desert? These are some of the theories from mainstream scholars which try to explain the enigmatic lines at Nazca.