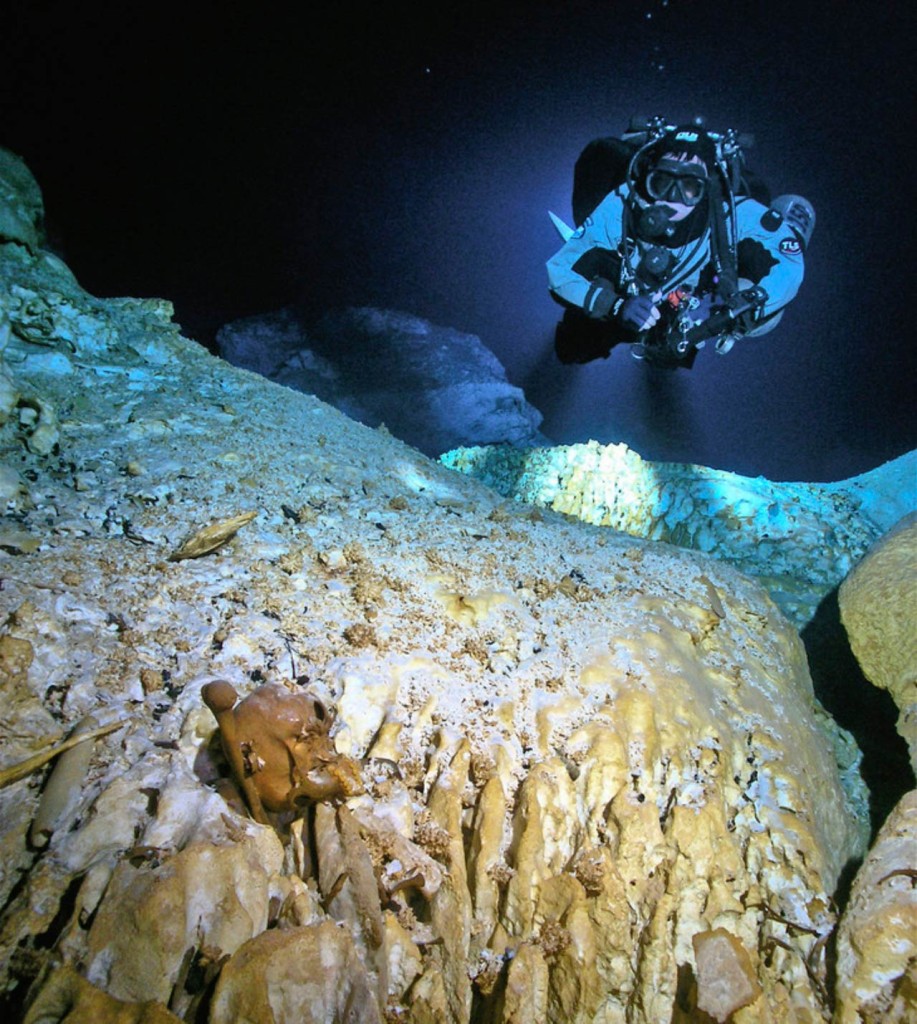 Cave diver inspects the skull of Naia, a 12,500-year-old teenage girl discovered in a submerged cave on the Yucatan peninsula of Mexico. I mage credit: Daniel Riordan Araujo.

The well-preserved, genetically intact skeleton of a teenage girl who lived about 13,000-12,000 years ago in what is now Mexico is helping resolve a long-standing question of the link between first Americans (Paleoamericans) and modern Native Americans.

A team of science divers led by Alberto Nava Blank from Proyecto de Espeleologia de Tulum discovered the skeleton along with remains of giant ground sloths, gomphotheres, saber-toothed cats and many other extinct animals deep inside a submerged chamber in the Sac Actun cave system in the eastern Yucatan Peninsula, Mexico, in 2007.

They named the girl Naia and the location ‘Hoyo Negro’ (Black Hole) because of the hole’s vast impenetrable darkness. The pit, described as a deep, massive chamber 61 meters in diameter, was so vast it absorbed all visible light from powerful underwater lights that could not see the other side of the chamber.

Now, a team of scientists led by Dr Thomas Stafford Jr. from Aarhus University has accurately determined the Naia’s age.

“Individuals from 9,000 or more years ago have morphological attributes distinctive from later Native American peoples. What we have here is the unique combination of an adolescent Paleoamerican skeleton with a Native American DNA haplotype,” said Prof Douglas Kennett of Pennsylvania State University, a co-author of the paper published in the journal Science.

“The challenge, to date, has been finding a fossil of an adult complete enough to do the morphology work, preserved enough to have mitochondrial DNA, while at the same time having appropriate material for dating. Naia, the most complete human skeleton found, meets those requirements,” said co-author Dr Yemane Asmerom from the University of New Mexico.

After traditional and well accepted direct-dating methods failed because the bones were mineralized from long emersion in warm salty water within this limestone cave system, the scientists built a geochronological framework for Naia using a unique combination of techniques.

Naia was found deep below today’s ground surface in a collapsed chamber connected to the surface via a web of now flooded tunnels. Because the caves are limestone, mineral deposits continued to form while the cave was largely dry.

The researchers noticed accumulations of calcium carbonate which could be accurately dated using the uranium thorium method. Because these drip water deposits formed on top of Naia’s bones, their date must occur after she fell in the cave. The oldest one dated so far is 12,000 years old.

The radiocarbon dating of the DNA tooth enamel yielded a maximum age for Naia of 12,900 years ago.

“Unfortunately, we can’t rule out that the tooth enamel is contaminated with secondary carbonates from the cave system, but we removed potential contaminates using standard techniques,” Prof Kennett said.

“We consider this a maximum age and when combined with the uranium thorium dates from the adhering speleothems, we argue that the skeleton dates between 12,000 and 13,000 years ago. Well placed as a Paleoamerican.”

Naia’s skull shape does not look like those of Native Americans, but the Beringian-derived mitochondrial DNA D1 haplogroup directly links her to the modern Native peoples of the Americas.

This is consistent with the hypothesis that her ancestors’ origins were in Beringia, a now partially submerged landmass including parts of Siberia, Alaska and the Yukon.

Early humans moved into this area from elsewhere in Asia and remained there for quite some time.

During that time they developed a unique haplotype that persists today in Native Americans. Genetically, Paleoamericans have similar attributes as modern Native Americans even if their morphology appears different.