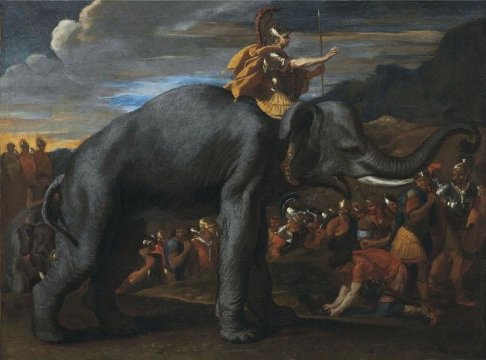 Hannibal crosses the Alps on an elephant.  Credit: Nicolas Poussin

Microbiologists based in the Institute for Global Food Security and School of Biological Sciences at Queen’s University Belfast have recently released results that may have answered one of ancient history’s greatest enigmas: Where did Hannibal cross the Alps?

Hannibal was the Commander-in-Chief of the Carthaginian army during the Second Punic War with Rome (218 -201 BC). He famously led his troops (thirty thousand men, just thirty seven elephants and over fifteen thousand horses and mules) across the Alps to invade Italia — bringing the Roman army to its knees. While the great general was ultimately defeated at Zama in 202 BC, this campaign is regarded today as one of the finest military endeavours of antiquity. We can say, in retrospect, that these events ultimately shaped the future Roman Republic, eventually with Caesar morphing into the Empire, and therefore into European civilisation as we know it.

For over two thousand years, historians, statesmen and academics have argued about the route Hannibal took across the Alps. Until now, no solid archaeological evidence has been forthcoming. However, this week — publishing on-line in the Journal Archaeometry — Queen’s University’s microbiologist Dr Chris Allen and his international team of colleagues, led by Professor Bill Mahaney (York University, Toronto), have finally provided solid evidence for the most likely transit route that took Hannibal’s forces across the Alps via the Col de Traversette pass (~3000 m). This crossing point was first proposed over a half century ago by the biologist and polymath Sir Gavin de Beer, but has not previously been widely accepted by the academic community.

Using a combination of microbial metagenome analysis, environmental chemistry, geomorphic and pedological investigation, pollen analyses and various other geophysical techniques, the researchers have shown that a ‘mass animal deposition’ event occurred near the Col de Traversette — that can be directly dated to approximately 2168 cal yr BP, i.e. 218 BC.

Dr Chris Allen, from the Institute for Global Food Security at Queen’s University Belfast, said: “The deposition lies within a churned-up mass from a 1-metre thick alluvial mire, produced by the constant movement of thousands of animals and humans. Over 70 per cent of the microbes in horse manure are from a group known as the Clostridia, that are very stable in soil — surviving for thousands of years. We found scientifically significant evidence of these same bugs in a genetic microbial signature precisely dating to the time of the Punic invasion.”*

The above post is reprinted from materials provided by Queen’s University Belfast. Note: Materials may be edited for content and length.  Reprint by: Sciencedaily.com