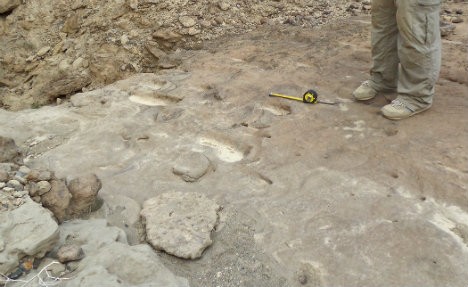 A team of Italian researchers have possibly uncovered the oldest ever fossilized footprint left behind by modern man’s ancestor, Homo Erectus. The prints are thought to date back some 800,000 years and were unearthed in the desert of south eastern Eritrea.

“Their age is yet to be confirmed with certainty, but footprints will reveal a lot about the evolution of man, because they provide vital information about our ancestors gait and locomotion,” Alfredo Coppa, the Italian archaeologist from Rome’s Sapienza university who led the dig, told The Local.

Coppa and his Italian colleagues were working with researchers from Eritrea’s National Museum when they unearthed the 26 m2 slab of stone containing the footprints.

Today, the area lies in the middle of an arid desert, but 800,000 years ago the environment was very different.

The fossilized footprints, which are almost indistinguishable to those of modern man, were left in sandy sediments on what archaeologists believe was once the shore of a large lake.

The shapes of the prints suggests they were filled with water after they formed before they eventually dried out and were buried.

“Fossilized footprints are extremely rare,” Coppa explained. “We need to carry out more digs in the area, which has so far turned up the fossilized remains of five or six different Homo Erectus specimens.”

Around the footprints, which move from north to south, the tracks of a gazelle-like animal – which were perhaps being stalked by the early man – can also be seen.

Homo Erectus lived between 1.9 and 70,000 years ago and spread from eastern Africa to much of the Middle East and Asia. Modern man, Homo Sapiens, evolved from a group of African Homo Erectus around 200,000 years ago.

The footprints may be the oldest Homo Erectus prints ever discovered but they are by no means the oldest hominid prints.

In 1976 a team in Tanzania located the 3.8 million-year-old tracks of man’s first upright ancestor, Australopithecus.*