According to Vicente Fuentes, a vivid researcher, there is in fact, at least, one pyramid hidden beneath the vast sheet of Ice on Antarctica. According to Fuentes, the satellite image could prove to be the ultimate evidence of a pyramidal structure located on the main ridge of Antarctica. This would mean that in the distant past, when Antarctica was much different than it is today, ancient civilizations could have developed on the now-frozen continent, leaving behind marvelous constructions, telling the story of a time, when our planet was inhabited by different civilizations, at a completely different time, omitted by history and mainstream researchers. 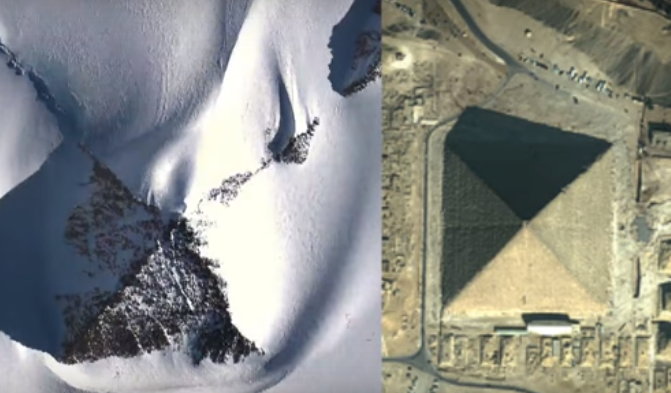 Fuentes goes through the main characteristics of the Pyramid and other structures that could be located on the vast sheet of ice, making comparisons to the Great Pyramid of Egypt.

The idea that there are Pyramids hidden at Antarctica goes back several decades. While Skeptics remain unconfident, suggesting that these structures are mere natural formations, satellite images and accounts of people traveling there tell a much different story.

According to a research from 2009, scientist studied the icy continent collected samples and came across pollen particles in Antarctica suggesting that the ecosystem of Antarctica was very different in the past, pointing that the summer temperature reached around 20 degrees Celsius at one point.

“Go back 100 million years ago and Antarctica was covered in lush rainforests similar to those that exist in New Zealand today.” –Dr Vanessa Bowman

In 2012, another team of researchers managed to identify 32 species of bacteria and 2,800-year-old halophile microbes in water samples from Lake Vida in East Antarctica. The permanent surface ice on the lake is the thickest non-glacial ice on earth.

According to researchers, during its long history, Antarctica was located farther north and experienced a tropical or temperate climate, meaning that it was covered in forests, and inhabited by various ancient life forms. What does this mean? Well… given the little we know about the life on our planet in the distant past, it is likely that people lived on this now, icy continent and developed as a society just like people did in Africa, Europe, and Asia. Even though this is something considered as unlikely by mainstream scholars, the only way we will know for sure the secrets hidden beneath the ice is by exploring the continent and allowing society to see the results.

If we go back to Africa, we know that Scholars and Egyptologists have long suspected that the Sphinx is much older than believed, possibly even over 10,000 years old.

These theories are supported by the discovery of water erosion on the gigantic Sphinx, which according to scholars tells the story of extreme climate change in the distant past.

This means that if the climate in Africa and other parts of the world changed drastically,  it is possible that the same thing happened in Antarctica in the distant past. If researchers manage to prove that the pyramids of Antarctica are man-made structures, the discovery could cause a major revision of the history of humanity.

But myths and speculation about Terra Australis date back to the antiquity. Around 350 B.C. Aristotle wrote in his book, meteorology, about the Antarctic region. Marinus of Tyre, a Greek geographer, cartographer and mathematician used the name in a world map of the second century A.D.

People believed in the distant past that a landmass called Terra Australis existed; a giant continent located in the southern parts of the planet which was there to provide a “balance” for the northern lands of Europe, Asia, and North Africa. This idea existed since the times of Ptolemy, the first-century A.D.