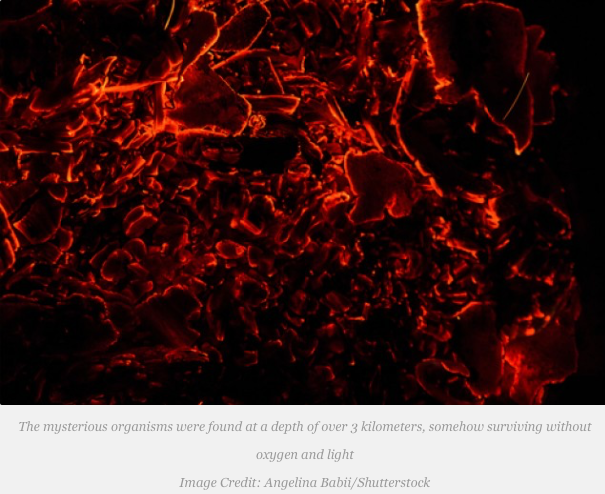 Scientists learn something new every day apparently, and with each newly obtained knowledge, they have to adapt their opinion on the definition of life, and the conditions necessary for it to thrive.

According to a new study published in Nature Microbiology, extremely ancient and rare lifeforms have managed to survive inside the Earth’s crust.

The microbes in question are called acchae and are extremely primitive lifeforms that have been found surviving in acidic hot springs and some salt lakes, something that took scientists by surprise since these environments are so hostile that they are uninhabitable for the living creatures.

Although the organisms discovered resemble bacteria, genetically speaking, they are extremely different.

These organisms are able to survive temperatures of around 90 degrees Celsius, which makes their nickname of ‘Hellish’ organisms more than adequate.

This study is the first to investigate how these deep-dwelling, single-celled organisms can survive such extreme conditions inside Earth’s crust, at temperatures surpassing 170 degrees Fahrenheit, without oxygen and light.

Scientists believe that since these organisms lack the ability to photosynthesize, the Hadesarchaea are most likely obtaining their energy by taking advantage of certain chemical compounds found in their surroundings, through a process known as chemosynthesis. This process is used by numerous bacteria and archaea in order to survive harsh environments like the Lost City Hydrothermal Field at the bottom of the Atlantic Ocean.

The Hadesarchaea are also found in the Yellowstone National Park hot springs Wyoming and within the White Oak River estuary in North Carolina.

Researchers were able to sequence the genome of the surface-dwelling organisms and have thus managed to identify the key genes responsible for controlling the metabolic processes.

“By comparing the metabolic genes of Hadesarchaea with those of other microorganisms, we figured out that Hadesarchaea had a rather versatile metabolic repertoire,” Thijs Ettema, an associate professor at Uppsala University, Sweden, told IFLScience. Genes associated with the oxidization of carbon monoxide were found, meaning that they may use a considerably rare form of chemosynthesis.

According to Thijs Etema, Hadesarchaea seems to have adapted in order to survive in nearly inhospitable depths, considering them scavengers in a manner of speaking.

The fact that organisms are able to survive under such extreme conditions and at such depths opens up new possibilities when looking at extraterrestrial life in our solar system. Discovering Hadesarchaea at such depths means that maybe on Mars, similar organisms also exist below the ‘inhospitable’ surface of the red planet. Maybe there are organisms in our solar system that just like the Hadesarchaea, gain energy and survive using chemosynthesis or another similar method.

Ettema cautions that “before being able to provide a firmer, educated guess about [this], we would first need to understand better how other microbes of Earth’s deep biosphere make a living.”