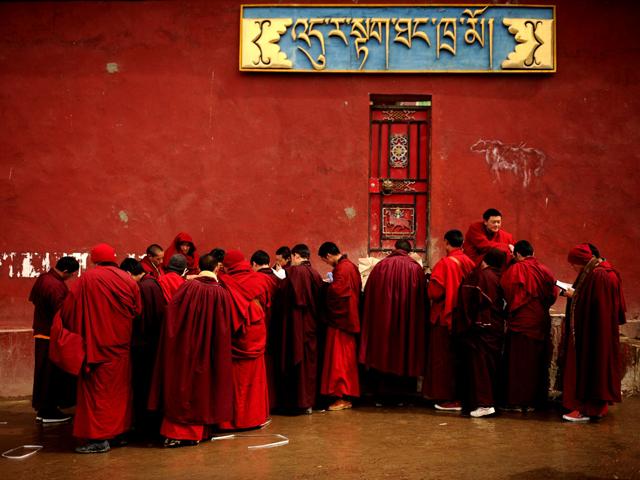 The finding could establish the importance of the region as a thriving Buddhist centre [representational picture].   (AFP Photo)

The Archeological Survey of India (ASI) has unearthed structures resembling a Buddhist monastery in Vadnagar, Gujarat. This finding could further establish the importance of the region as a thriving Buddhist centre.
“The latest excavation revealed structures resembling monastic cells. However, only further excavation at the site would help establish whether the structures were part of a monastery or were secular in nature,” superintending archaeologist of ASI (Western region) Madhulika Samanta said.
“We have unearthed six-seven monastic cells but the entire planning can only be ascertained after extended excavation, which is not possible now because of concrete houses having been built there by locals. We have not been able to establish its religious association, but we assume that it can be a monastery,” she said. “To establish Vadnagar’s claim as a thriving Buddhist centre, this could be an important discovery, but for that we need to get land so we can carry out further excavation. For that, we have written to our head office in Delhi stating our position,” Samanta said.
The ASI carried out the excavation at Vadnagar in two phases between January 2015 and May 2016, after Prime Minister Narendra Modi, who hails from Vadnagar, took office. “The aim has been to establish the town, situated in Mehsana district, as an important centre from the point of view of Buddhism, especially as mentioned in the written accounts of Chinese traveller Hiuen Tsang,” she said.
In his accounts belonging to 7th century AD, Hiuen Tsang talked about ten Buddhist monasteries flourishing in Onantopulo, or Anandpura, the ancient name of Vadnagar.
Buddhism is likely to have flourished in Vadnagar between 3rd century AD and 9th century AD, Samanta said. “In 2007, excavation carried out at Vadnagar by the state’s Archaeology department revealed a monastery with 12 residential cells, supposed to have been used between 2nd century AD and 4th century AD. The discovery authenticated Huien Tsang’s account of the ancient town,” she added.
Remains of monastery-like structures excavated this time might have been constructed in at least three different phases of history between 3rd century AD and 9th century AD, she said.*