A massive underwater sinkhole surrounded by reefs, caves and sharks has provided archaeologists with clues in the mystery of the fall of the Mayan civilization, according to new research.

Scientists from Rice University and Louisiana State University found evidence in Belize’s Great Blue Hole, a 400ft-deep cave in a barrier reef, that supports the theory that drought and climate conditions pushed the Mayans from a regional power to a smattering of rival survivors and finally a virtually lost civilization.

The researchers took sediment samples from both the ancient sinkhole and the central Belize lagoon corresponding to the era of the Mayan decline, between 800 and1000 AD. In those samples they tested the ratio of aluminum and titanium – a sign of heavy rainfall from tropical cyclones pounding the element out of the rock and into the sea. Their study on the lagoon, which has yet to be published, complements one published last year in Scientific Reports on the Hole, and found relatively little titanium, meaning there had been fewer tropical cyclones and longer droughts than normal during those two centuries.

Evidence of droughts as a factor in Mayan civilization’s long decline has been growing for years, including stalagmite evidence found in 2012, but the Great Blue Hole is better aligned with the path of storm systems passing over the ancient Mayan capital city of Tikal. The Yucatan peninsula lacks natural water resources, so the Mayans relied on rainfall that accumulated in limestone sinkholes – natural sinkholes called cenotes (sometimes also used for religious rituals) and manmade cisterns called chultunes. Several prolonged periods of drought, like those the evidence suggests, could have quickly drained the Mayans’ stores of potable water.

Famine, unrest and war are natural consequences of a water crisis – the Mayans farmed on difficult soil and lived in a fractious, combative culture. By 900 AD any Mayan cities had been abandoned; a second period of droughts may have tipped the scales for other cities, as dirty water spread disease, dry weather killed crops and rival groups fought and fled in search of resources.

Scientists have been puzzled for decades by the question of why the Mayans abandoned their cities and apparently forsook a civilization that gave them a script, elaborate art and architecture, sport, agriculture, trade and a three-tiered concept of time. Scientists have suggested war, climate, disease and politics as possible causes. Supporters of the drought hypothesis sometimes argue that it can assimilate many factors into a larger theory of systemic collapse. 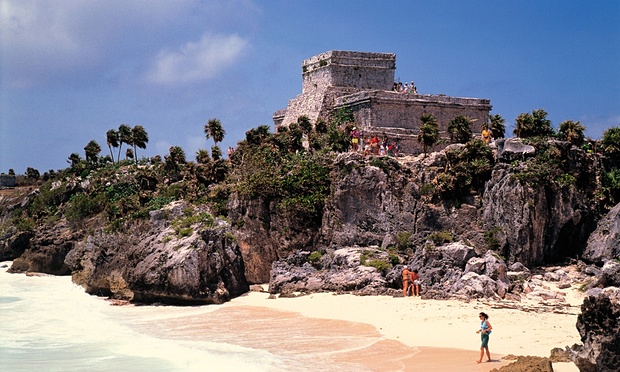 The major city of Chichen Itza, along the coast of the peninsula, thrived for about a century after 1000AD, almost certainly taking in Mayans who arrived from the arid south to build a revised iteration of Mayan culture in the north. Then, the Blue Hole research shows, a second period of droughts drained the peninsula, coinciding with the estimated time that Chichen Itza also quickly declined. Mayans did however continue to live there, albeit in smaller numbers, surviving the fall of their civilization, the arrival of the Spanish conquistadors and the changes of the centuries until the present day.

Climate change and drought have been cited as likely causes in the decline of other civilizations. Yale archaeologist Harvey Weiss and University of Massachusetts climatologist Raymond Bradley argue that massive droughts changed history in the Middle East, devastating the Akkadian empire and Egypt’s Old Kingdom around 2200 BC; that sometime after 500 AD drought and floods forced Peru’s Moche civilization north; and that almost a thousand years later similar problems caused the Anazasi to abandon their cities in the North American south-west.