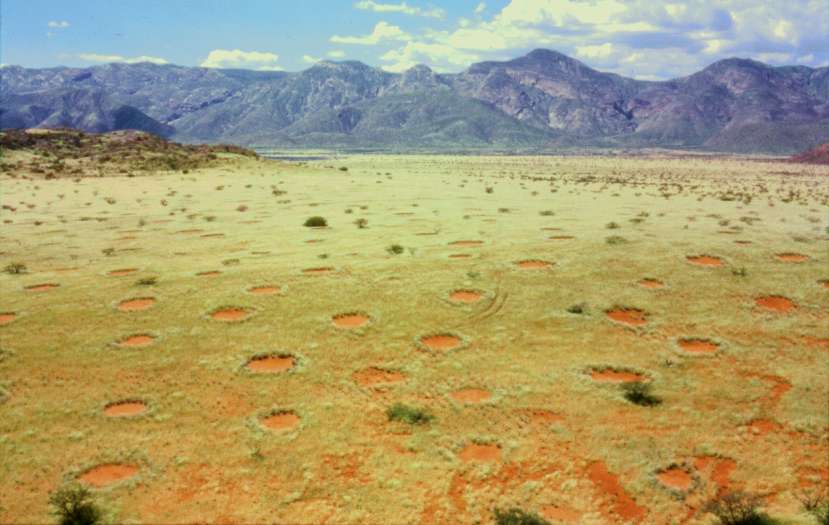 The enigmatic circles of sand — burnt orange, almost impeccably round and rimmed by a fringe of tall grass — are spaced at surprisingly regular intervals across the otherwise barren landscape. Over the course of decades, they appear, expand and then fade, almost as if they had a life cycle of their own.

And, viewed from above, they seem so perfect and improbable their existence can only be ascribed to something not of this world. Perhaps they are the footprints of a god, as the Himba bushmen who live in the Namib desert have long believed. Or maybe the bare patches have been poisoned by the breath of a malicious dragon that dwells underground.

Or else they’re the work of aliens who thought it might be fun to mess with the Earthlings by scratching out some circles in the grass and leaving us to puzzle over them for centuries. Hardly less fanciful— though far more grounded in fact — was this suggestion from a German scientist in 2013: After finding sand termites in every “fairy circle” he sampled, he concluded that the industrious insects might be geoengineering their harsh environment, burrowing out bare spots in ever-broader concentric circles in order to capture some of the desert’s scarce water for themselves.

Whatever their cause, the fairy circles have brought countless scientists, mystics and conspiracy theorists to remote swath of southern African desert that was long thought to be the only place they could be seen.

Unbeknownst to almost anyone outside the small mining town, the same strange phenomenon that so captivated people in the Namib also occurs in Australia’s outback. Not only that, but a comparison of the two types of fairy circles could help solve the centuries-old mystery of what’s creating them.

It’s not gods, scientists said Monday in the journal Proceedings of the National Academy of Sciences, and it’s not dragons or bugs.

It’s the plants themselves. They’ve self-organized.

This is not an entirely new theory. South African biologist Michael Cramer suggested it in a paper in 2013, and a year later the lead author of the PNAS study, Stephan Getzin, conducted his own analysis of aerial images of the Namibian circles to develop a computer model that could explain how plants — which lack central nervous systems, and, you know, an understanding of the notion “circle” — could coordinate themselves in this way. 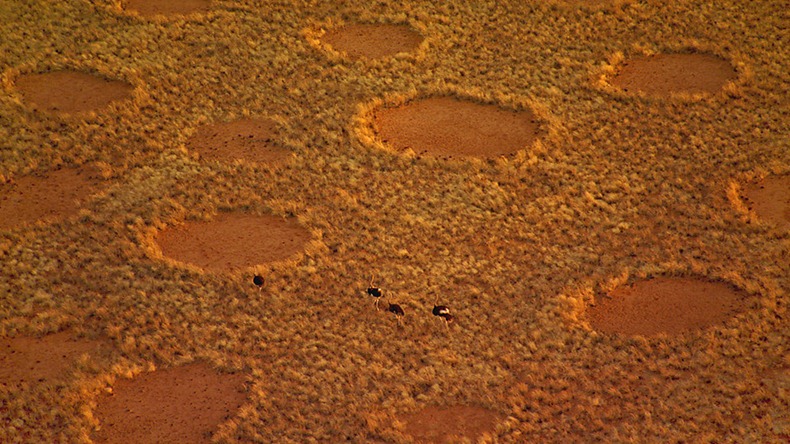 Their motive for doing so — if plants can really be ascribed a motive — is pretty simple: In a desert environment where water is scarce, the land can only sustain so much vegetation. Attempting to carpet the entire earth with grass would be a recipe for mutually assured destruction, so instead the plants organize into clumps. Covered areas soak up the water from bare areas, and everyone drinks, even when it’s been months since the last rainfall. That’s how the area around the fairy circles can sustain full-time vegetation when the rest of the Namib desert is desolate except for right after a rain.

Norbert Juergen, the German scientist who most recently proposed the termite theory (though he’s far from its only proponent) suggested that it’s “extremely clandestine” sand termites that make this happen. The bugs chomp away at grass roots underground, forming a small bare patch of sand through which water can sink to reach them. The plants on the rim also benefit from the extra moisture in from this water sink, explaining how they can grow so large. And as the termites chomp away at more and more grass, the circle expands.

But other researchers wanted more evidence. Walter Tschinkel, the biologist at Florida State University in Tallahassee who authored a much-cited PLOS One study on the “life cycles” of fairy circles in 2012, told Science magazine that Juergen may have found sand termites in the circles, but he hadn’t done anything to prove that the termites were in fact attacking the plants.

“Juergens has made the common scientific error of confusing correlation — even very strong correlation — with causation,” Tschinkel said just after the Juergen paper came out.

That’s where the self-organization theory comes in. Maybe, as Getzin and other researchers suggested, the plants didn’t need bugs to help them form circles. Maybe they could do it on their own.

On the other side of the globe, Bronwyn Bell, an environmental manager for the Australian mining company Rio Tinto, read Getzin’s 2014 paper on the Namibian circles with interest. The phenomenon he described sounded just like one she’d seen in her own county. People in the Pilbara, a dry, thinly-populated part of western Australia, had talked about their own fairy circles for years. But no one had the resources or the expertise to investigate them more thoroughly.

“Three days [after publishing the 2014 paper], I had in my letterbox something that looked identical to the Namibian fairy circles,” Getzin told Smithsonian Magazine. ”We couldn’t believe it — the Namibia fairy circles are supposed to be the only ones in the world.”

Next thing he knew, he and his colleagues were on a plane to the outback.

The circles there are a lot like the Namibian ones, co-author Todd Erickson, a biologist at the University of Western Australia, told the Australian Broadcasting Corporation. Each is about a dozen feet in diameter and 30 feet from the next nearest circle. Standing inside one, you can’t tell you’re in the middle of a pattern at all. But from above, the arrangement becomes clear: hundreds of fairy circles grouped in hexagon-like formations.

Unlike in Namibia, the locations of these circles didn’t seem to correlate to any kind of termite activity — pretty much putting the kibosh on Juergen’s theory. Instead, the pattern matched Getzin’s computer model for self-organization. 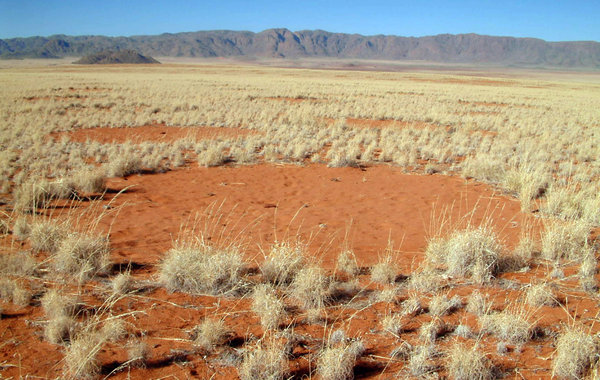 The principle of self-organization is an old one: Simply put, it describes how an unstructured and chaotic group can transform into an organized system without any kind of central coordination. Alan Turing proposed it to explain patterns like zebra stripes and dalmatian spots that appear on animals’ skin (you can even watch it happen here). It’s also been used to explain flocking behavior — how birds that are just looking to move in the same direction without bumping into one another are able to fly in complicated formations. Self-organization is said to be the driving principle behind phenomena from crystal formation to herd behavior to the market economy.

A combination of math and the researchers’ own observations explains how this might form a fairy circle.

“The way I look at it is, it’s like drying mud,” Tschinkel, who was not involved in the PNAS study, told Smithsonian.

After a rain, the scant water is pulled in all directions by the Australian desert’s thirsty plants. Depending on how those plants are distributed, some spots inevitably become drier than others. Nothing grows there, so the clay becomes hard and impermeable. And the next time rain falls, it skims over the surface of the crusty clay until it reaches an area where plants are growing. Those plants soak it up, then put down bigger roots, so that when the next rain comes they’re able to pull it away from their neighbors — killing them off and making the bare spot even bigger.

In Namibia, the circles form slightly differently: Instead of washing into the waiting roots of nearby plants, water sinks into the porous sand in the Namib desert, turning the bare fairy circles into a reservoir for thirsty plants during long dry periods.

But in both places, the researchers say, the mechanism and the result are the same: Uncoordinated competition between individual plants fighting over water can lead to a pattern that repeats itself across a vast landscape.

The find in Australia, “is pretty good evidence for the self-organizing theory,” Cramer said in an interview with the New Scientist. “There is still a long way to go to make it conclusive, but I think the evidence is mounting.”

Tschinkel, on the other hand, had the same warning for authors of the PNAS paper that he gave Juergens: “Correlation between a computed model and nature is still not proof of causation, no matter how nicely the output mimics nature,” he told the Atlantic. It will take an experiment in which scientists artificially create the circles by manipulating water and soil to truly prove the self-organization theory.

Still, at the very least, the find in Australia has doubled the number of studied fairy circle sites around the globe. And based on his computer models, Getzin believes are probably at least a few more like them in deserts around the world, waiting to be found. The fairy circle enigma is far from over.

“You should never claim to put an end to the mystery,” he told the New Scientist. “We’ve just made one significant step forward in solving the problem.”