…it would almost wrap around the     circumference of our entire planet? 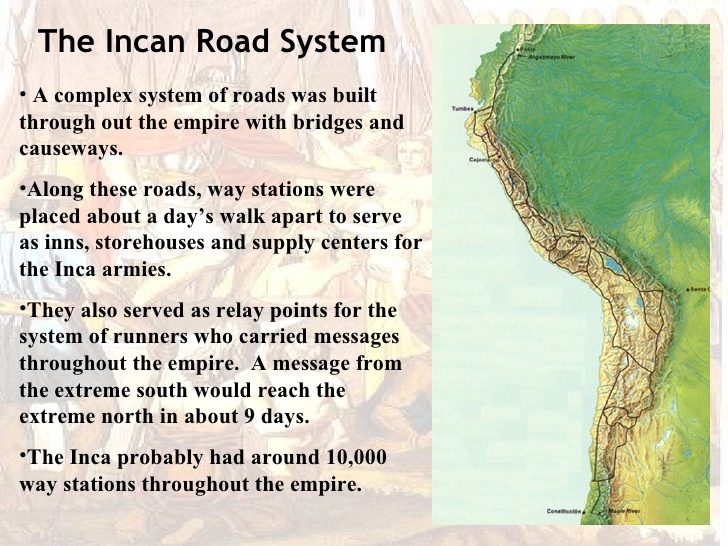 THE INCA ROAD SYSTEM WAS THE MOST EXTENSIVE AND ADVANCED TRANSPORTATION SYSTEM IN PRE-COLUMBIAN SOUTH AMERICA.

The network was based on two north-south roads with numerous branches. The best known portion of the road system is the Inca Trail to Machu Picchu.

The eastern route ran high in the puna grasslands and mountain valleys from Quito, Ecuador to Mendoza, Argentina. The western route followed the coastal plain not including in coastal deserts where it hugged the foothills.

When you consider that the Earth’s circumference is 40,075 km, the road network could almost encircle the entire planet!*….. Source: www.HeritageDaily.com

More about the Inca Engineering:

The Inca road system formed a network known as the royal highway or qhapaq ñan, which became an invaluable part of the Inca empire, not only facilitating the movement of armies, people, and goods but also providing an important physical symbol of imperial control. Across plains, deserts, and mountains, the network connected settlements and administrative centres. Well-built and lasting, many roads included bridges, causeways, stairways, and also had small stations (chaskiwasi) and sometimes larger, more luxurious complexes (tambos) dotted along every 20 km or so, where travellers could spend the night and refresh. 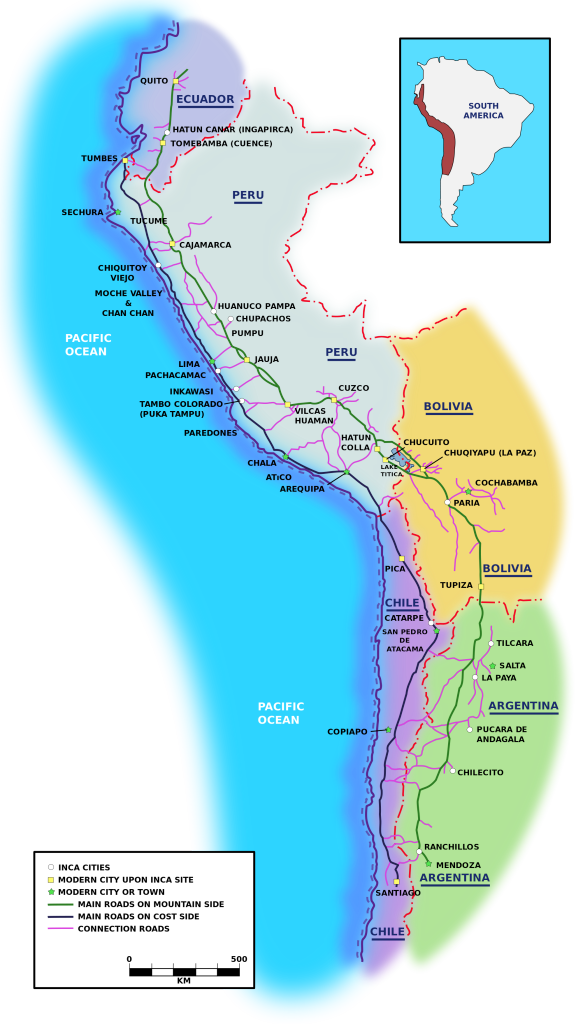 The Inca road system formed a network known as the royal highway or qhapaq ñan, which became an invaluable part of the Inca empire, not only facilitating the movement of armies, people, and goods but also providing an important physical symbol of imperial control. Across plains, deserts, and mountains, the network connected settlements and administrative centres. Well-built and lasting, many roads included bridges, causeways, stairways, and also had small stations (chaskiwasi) and sometimes larger, more luxurious complexes (tambos) dotted along every 20 km or so, where travellers could spend the night and refresh. 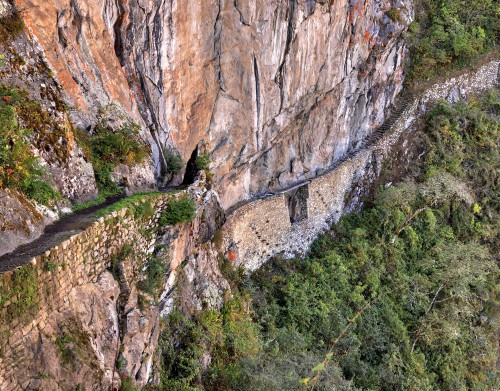 Inca roads were built without the benefit of sophisticated surveying equipment using only wooden, stone, andbronze tools. As they were built in different geographical zones using local populations, the roads are, consequently, not uniform in construction design or materials. The width of most roads varies from one to four metres, although some could be much bigger, such as the 15-metre wide highway in the Huánuco Pampa province. Sometimes there are also two or three roads constructed in parallel, especially near the larger urban centres. Flattened road beds – often raised – were usually made using packed earth, sand, or grass. The more important roads were finished with precisely arranged paving stones or cobbles. Roads were typically edged and protected with small stone walls, stone markers, wooden or cane posts, or piles of stones. Drainage was provided by frequent drains and culverts, which drew off rainwater from the road surface, channelling it either along or under the road. When crossing wetlands, roads were often supported by buttress walls or built on causeways. Bridges of stone or reeds were also constructed to cover distances in a more direct route as were large, stone, llama-friendly staircases in mountainous terrain. There was even an appointed official, the Chaka Suyuyuq, responsible for inspecting the empire’s bridges.

Generally, and despite their reputation for Roman-like long straight roads, Inca roads tended to follow natural contours as the straight stretches of road are rarely more than a few kilometres long. It is also noteworthy that Inca roads are very often more elaborate and well-constructed than was actually necessary. This attention to detail was almost certainly in order to impress travellers and conquered peoples of the superiority of Inca culture as felt by the lords of Cuzco.

Surely one of the most impressive sights and showcases for Inca engineering must have been the many rope suspension bridges which crossed perilous ravines. These were built using braids of reed or grass rope with wooden and fibre flooring. Perhaps the most famous crossed the Apurimac River near Cuzco and measured 45 metres in length. Suspension bridges were often built in pairs perhaps with one bridge for commoners and one for nobles. An alternative to such bridges was the oroya, a suspended basket which transported two or three people at a time over a greater distance than could be reached with a rope bridge. Local populations were given the responsibility of maintaining these perishable structures each year as part of their imperial tribute. 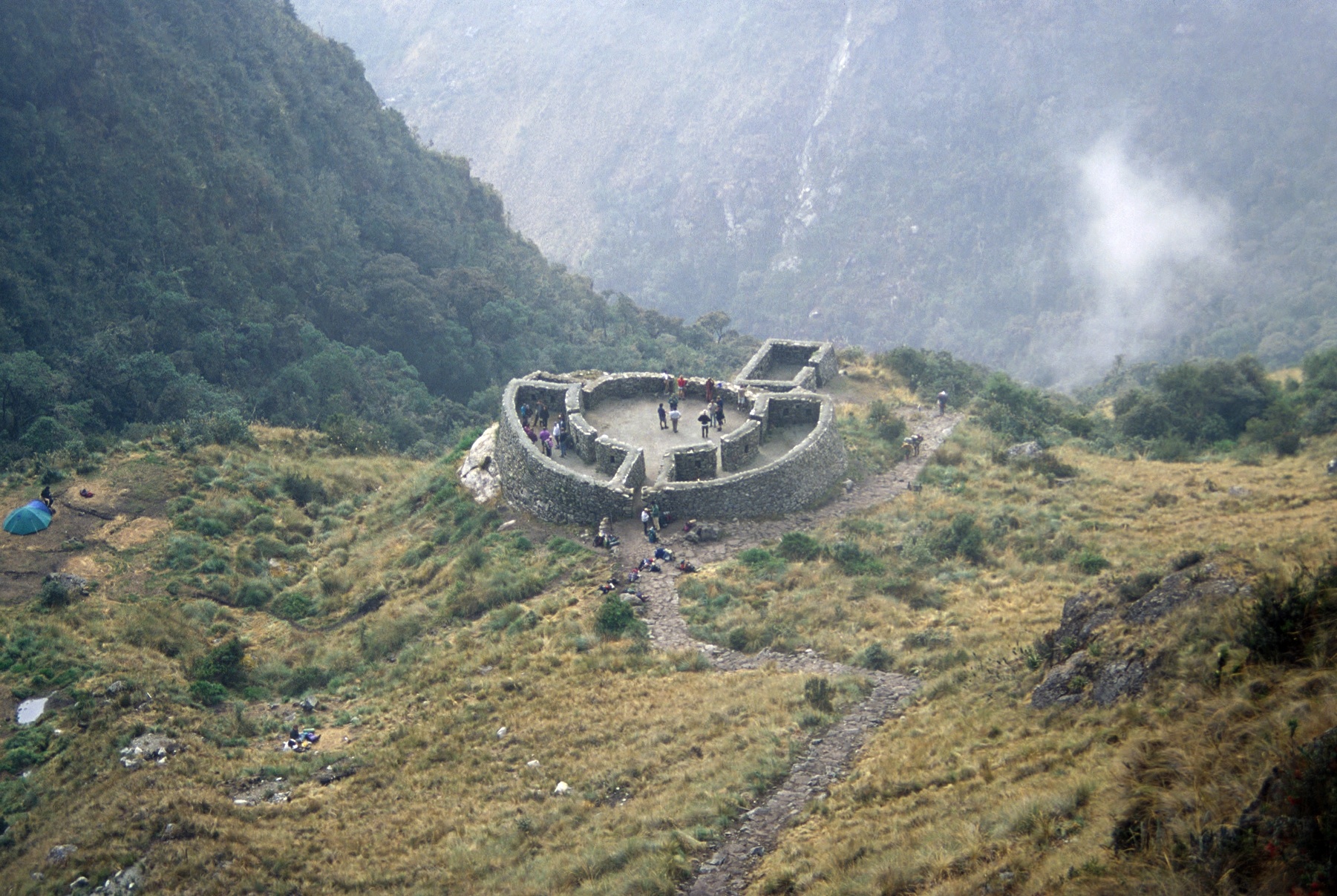 The extensive reach of the road network allowed the Incas to better move armies across their territories in order to further expand the empire or maintain order within it. Trade goods and tribute from conquered peoples – both goods and people – could also be easily transported to and from the major Inca centres, typically using llama caravans and porters (there were no wheeled vehicles). Inca administrative officials also travelled along the roads in order to dispense justice or maintain records such as local agricultural production, tribute quotas, and censuses. Ordinary people were not permitted to use the roads for private purposes unless they had official permission. They also sometimes had to pay tolls for the privilege, especially at bridges.

Another interesting feature of Inca roads was the use of runners (chaski or chasquis). Moving as fast as they could, they operated in relays, passing information to a fresh runner stationed every six to nine kilometres. However, it was not only messages that were carried between population centres but also such perishable items as fresh fish and seafood for the tables of Inca nobles. With this system, information (and fish) could travel up to 240 km in a single day. Messages carried over long distances would have involved hundreds of oral exchanges, and to preserve the correct meaning of the original message, quipu – a coded assembly of strings and knots – were probably used to help the memory of the runners.

Many sections of the Inca road network survive today and are still used by pedestrians, especially near such sites as Machu Picchu, where large stone stairways and bridges give access to the site for modern tourists. In addition, some of the original Inca routes have had modern roads built directly over them, illustrating the skills and vision for crossing terrain and distances possessed by Inca engineers and road builders.*