Count St. Germain – The Man and the Mystery – Project Yourself Skip to content
FREE US SHIPPING OVER $50 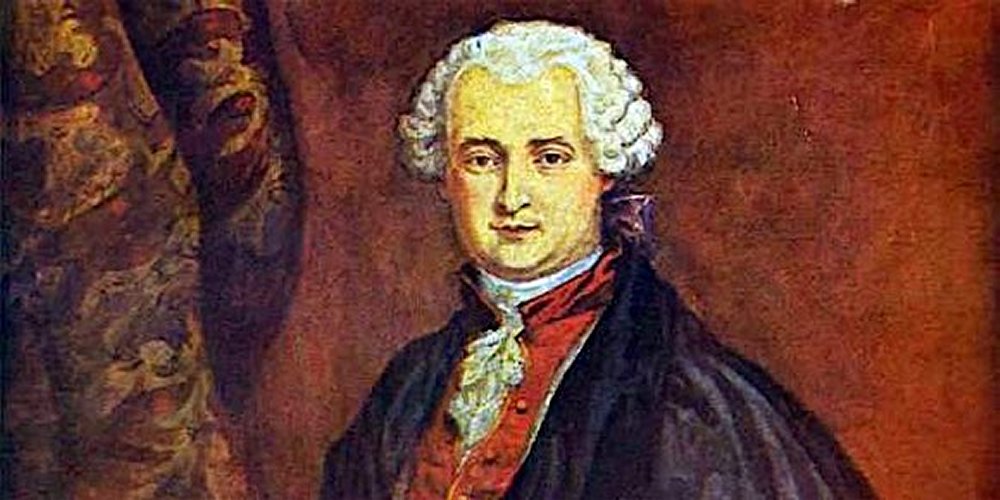 He was a mysterious person who refused to discuss his origin, fortune, and civil status and we know him first of all as Count de St. Germain. He claimed to have lived for several centuries.

“…equalled the greatest of the personages who move across the canvas of history. He towered above them all, kings, nobles, philosophers, statesmen and men of letters, in the majesty of his personal character, the nobility of his ideals and motives, the consistency of his acts and the profundity of his knowledge, not only of the mysteries of Nature, but also of the literature of all peoples and epochs…” (Colonel Henry Steel Olcott, President of the Theosophical Society)

The French genius, Voltaire attributed the count’s riches to his alchemical skills and believed that Saint-Germain ‘..is a man who never dies and who knows everything…”
To see danger in strangers and the unknown, is a distinguishing feature deeply rooted in human nature. This feature usually influences our mode of thinking and our acceptance or nonacceptance of someone’s behavior, physical appearance or both.
For an entire century, people who met Saint-Germain confronted his unusual physical appearance of a man of between forty and fifty years old. Obviously, a man cannot be taken seriously if he does not conform strictly to the laws of nature. He was called a a charlatan because he possessed knowledge of unknown secrets which allowed him to prolong his life beyond known human limits. 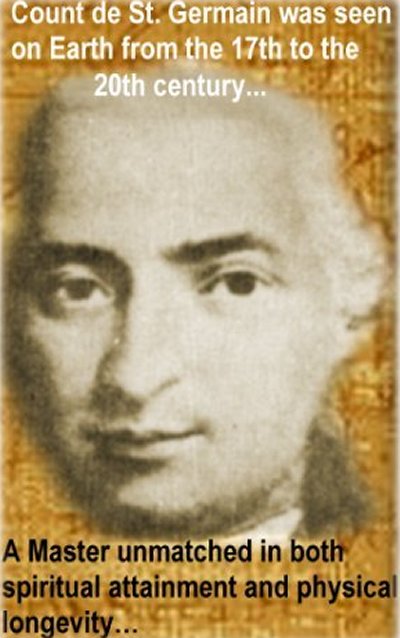 When Saint-Germain appeared in England one day, in 1745, unsurprisingly not everyone fell for his charm. Horace Walpole (1717 – 1797), an English art historian, antiquarian politician and the youngest son of British Prime Minister, met St. Germain and his opinion was that he “sings, and plays on the violin wonderfully, composes, is mad and not very sensible. Mr. Walpole had probably mixed feelings about this remarkable individual. Was he perhaps for Horace Walpole a little bit too unreal?
Others considered him as “an adventurer” and and yet some other prominent individuals had unfavorable comments regarding his engagement in politics. St. Germain was thought to be a Prussian spy and some European secret services suspected him to be a Russian agent or even a Jacobite rebel. He was even taken in custody on arriving in England but “his examination has produced nothing very material”.
For many of his pupils and friends, St. Germain was “one of the greatest philosophers who ever lived” and the man who “knows everything and shows an uprightness and goodness of soul worthy of admiration…”
Louis XV, king of France (1715–74) was at first very skeptical of the count’s unlimited knowledge of chemistry and other sciences. The first audience of the Count de St. Germain with the king was described in a very realistic manner and is an extraordinary experience even for us, readers, who were unable to participate in this meeting:

“If you can compose the Elixir of Life or find the Philosopher’s Stone we will be ready to buy the recipe. Meanwhile, you may have your mansion and your pension,” said Louis XV with the final remark: But I do not say that I believe in your pretensions.”

“I require neither a mansion, nor a pension,” replied de St. Germain sternly.

“I bring with me all the means I require, a retinue of servants, money to hire a house,”

and then he put his hand into his large braided pocket and took a number of loose diamonds and cast them on the inlaid table that stood between the king and himself in a luxurious hall at Versailles.
King Louis VX turned quickly; he could not resists an exclamation of delight when he beheld the stones sparkling with the pure glitter. While he was looking at the wonderful stones scattered on the table’s polished wood, de St. Germain said:
‘There, your Majesty, are some diamonds that I have been able to manufacture by my art.

“And if it please your Majesty, accept these as a poor offering.”

So, the creative labor started and the King participated in experiments in chemistry under the guidance of the most prominent chemist – the Count de St. Germain. However, this great man of unknown origin was not only a very good chemist. He was a skillful alchemist, well acquainted with physics as well.

“All we can with justice say, this gentleman is to be considered as an unknown and inoffensive stranger; who has supplies for a large expense, the sources of which are not understood,”

From Germany, he carried into France the reputation of a high and sovereign alchemist, who possessed the secret powder and in consequence the universal medicine. The whisper ran that the stranger could make gold…” the London Chronicle dated May 31-June 3, 1760 wrote”.

Baron Charles-Henri de Gleichen, the Danish diplomat in France, wrote in his autobiography (1813) about his meeting with St. Germain:

“He showed me other wonders, a large quantity of jewels and colored diamonds of extraordinary size and perfection. I thought I beheld the treasures of the Wonderful Lamp…”

“He possessed ability to transmute metals. Once in his laboratory, the Master asked for a silver six-franc coin which he covered with a black substance and exposed it to heat of the furnace. A few minutes later, St. Germain took the coin out of the fire… the silver coin was no longer of silver but of the purest gold.” 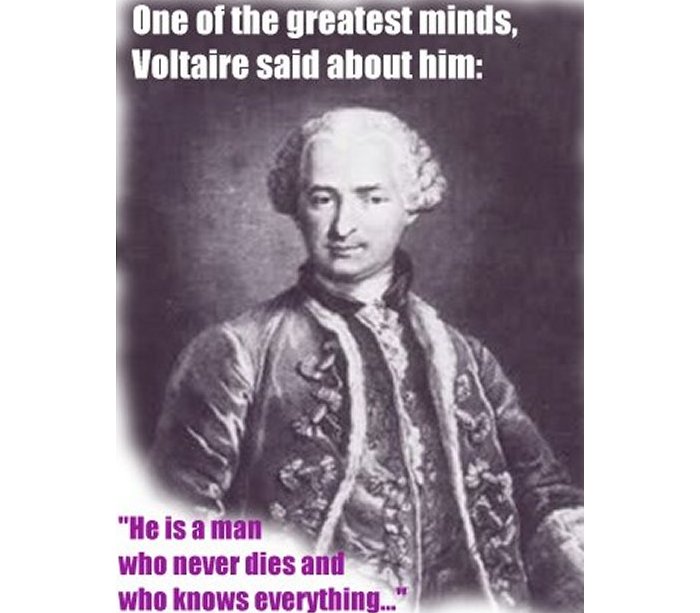 On another occasion, accused of black magic, the Count said that his laboratory did not deal with the supernatural because he was a serious student of chemistry and had made discoveries that were of some use to humanity. He knew how to make pearls grow, give them most beautiful lustre and he knew how to produce pearls and made finest diamonds.
He could create synthetic diamonds in his very limited laboratory at the royal castle Chambord, where he also lived and had all indispensable knowledge to transform carbonaceous materials into diamonds; namely a pressure of 273,200 kilograms per square centimeter and a temperature of about 2,800 degree C! Apparently, he possessed an unlimited knowledge because he was one of “those who knew everything”. “One needs to have studied in the pyramids as I have studied,” St. Germain once said.
Did his knowledge originate from the secret temples of ancient Egypt?
His links with Asian continent and his long stay in the Far East were also recorded. How much of his knowledge did originate from the mysterious monasteries and temples in Tibet and the Himalaya, where he spent quite a lot of time? In his memoirs, “Kleine Wiener Memoiren” published in 1845, Franz Gräffler claimed that the Count St. Germain was an emissary of Shambhala and Manly P. Hall in his “Secret Teachings of All Ages” M. P. Hall says that

‘The Comte de St.-Germain was thoroughly conversant with the principles of Oriental esotericism…”

‘He had a retreat in the heart of the Himalayas to which he retired periodically from the world. On one occasion he declared that he would remain in India for eighty-five years and then would return to the scene of his European labors. At various times he admitted that he was obeying the orders of a power higher and greater than himself. What he did not say was that this superior power was the Mystery school which had sent him into the world to accomplish a definite mission.’

“The Comte de St.-Germain and Sir Francis Bacon are the two greatest emissaries sent into the world by the Secret Brotherhood in the last thousand years…”

St. Germain was seen in many places and his behavior attracted the attention of high society of Europe. The whole of Europe was said to be his home but he also spent most of his days in constant voyage, visiting locales as distant as Turkey, Tibet, Mexico, and throughout the African continent.

“I will disappear from Europe, he said, to get in the region of the Himalayas. I will stand. I must rest. In eighty-five years, I will again,” he said.

The Masonic archives say that the Count was one of the selected representatives of the French Masons at their great convention in Paris, in 1785 and according to one theory

“The Comte de St. Germain and Christian Rosencreutz were one and the same individual,” Manly P. Hall says in his work “The Secret Teachings of All Ages”. St. Germain seemed to have assumed a number of aliases, which is mentioned by Mrs. Cooper-Oakley in her monograph, “The Comte de St.-Germain, the Secret of Kings”.

“It is evident that M. de St.-Germain adopted these various names in the interests of the political secret service work which historians have presumed to be the major mission of his life.” (M. P. Hall)

“Of all European alchemist”ts the greatest was Saint Germain, a Master who was unmatched in both spiritual attainment and physical longevity.”

“Because of his daily consumption of the Elixir of Immortality Saint Germain is reputed to have lived between 500 and 2000 years, although some maintain that he is still alive,” Mark A. Pinkham wrote in his book “The Return of the Serpents of Wisdom”.

In “Letters Of Helena Roerich II” dated to 18 June 1936, we read that “in all epochs there can be found empty tombs, or tombs containing substitute bodies. Thus, there exists the grave of Comte Saint-Germain, but, in fact, a substitute body is buried there”. However, he needed to rest sometimes… Rudolf Gräffer, a bookseller, publisher and a Rosicrucian, had a meeting with Saint Germain in 1790, in Vienna, Austria. This is what the great alchemist said to him:

“I have to go away, but you still see. I am necessary in Constantinople, and after in England, where I am going to prepare two inventions: paths of iron (railroads) and boats to vapor. Then I will come back to the Germany. The stations will change little by little, first the Spring, after the Summer. It is the gradual pause that announces the end of this cycle. The astrologers do not know anything, because they didn’t study me as the pyramids. Around the end of this century I will disappear of Europe and I will go to region of Himalaya. I need rest. I will be seen within eighty five years… Good-bye, I love you.” 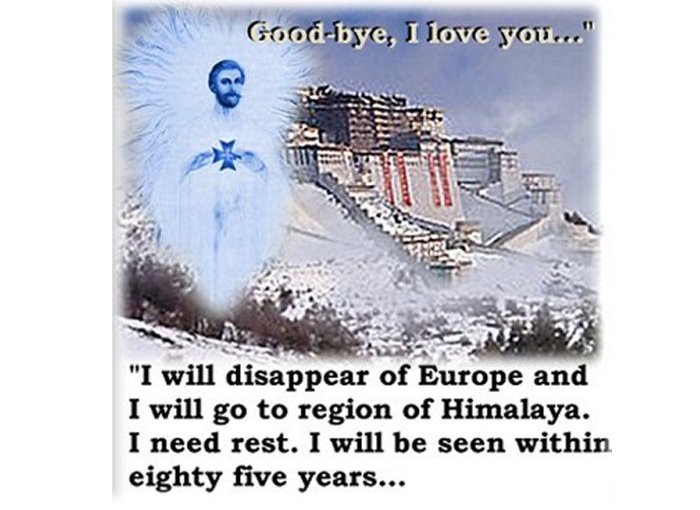 “It is not an absurdity to suppose that, if he really died in that time and place mentioned, would it have been put in the earth without pomp and ceremony, without the official supervision and the registration in the polices that attend the funerals of the men of his class and fame? Where are these data? He disappeared of the publishes sight there is more than one century, however, no book of memory contains them. A man who lived thus in the total light of the publicity could not have missing, if it really had died in that time and place, without leaving tracks. Furthermore, we have the alleged positive proof that he was alive several years after 1784…”