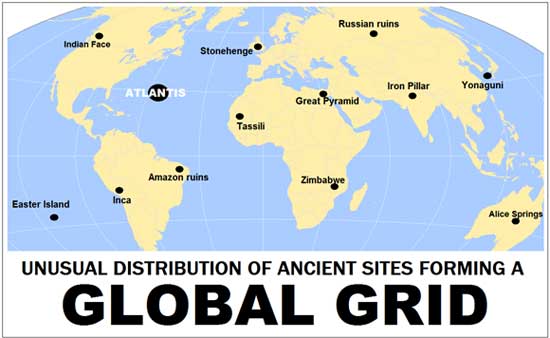 Is it possible that there is a pattern in the ancient monuments that are scattered across the globe? Why is it that numerous monuments across our planet share so many similarities? It seems as if there is a global signature present in all of the monuments that were erected by ancient man. How can science and history explain the fact that around the globe, different cultures and civilizations built very similar monuments… like the Pyramids. Giant structures that can be found from South America to Asia, and mysteriously, they all share great similarities.

Göbekli Tepe is the oldest place of worship in the world. It stands on the highest point of a vast mountain range located about 15 km northeast of the city of Sanliurfa (formerly Urfa / Edessa), in southeastern Turkey near the Syrian border. The place, according to archaeologists, was erected to the X millennium BC, around 11.5 thousand years ago, before the start of the sedentary.

Do you believe a global pattern exists? A Pattern that could help us understand our past, present and future?

Mysteriously, this complex of stone pillars and sculptures was deliberately buried about 8000 BC, remaining abandoned for about 500 years. mysteriously, If you study the details of the pillars and T-shaped stones which weigh up to 60 tonnes that make up the sanctuary, one can distinguish between animal reliefs and other symbols, humanoid god figures, “neolithic gods” with hands located to the sides and which are joined to the front, pointing towards the navel. This posture, according to researchers, is present in many other cultures around the globe and has a sacred meaning.

The Sumerian goddess Inanna was also depicted in the same position. Similarly, the famous statues of Easter Island, known as the Moai Statues were built standing with their hands placed on the same position. According to the researchers, this position symbolizes the birth or rebirth. But the connection seems to be much deeper across several ancient civilization as similar elements can be found in Bolivia at Tiahuanaco, In Egypt and in other parts of Africa.
What led the ancients to build similar statues despite allegedly not knowing each other? What relationship can be established between Anatolia (Asia Minor, Turkey) and Easter Island located in the mere Pacific Ocean?
Another important question is why did the ancients build such large structures? Why did the ancients erect huge statues like the Moai which reach a height of up to 4 meters? The statues are extensively large when compared to the average size of human beings. Is it possible that, like some researchers suggest, the ancients built large statues because of the disasters that occurred in the distant past? Did ancient man believe that large statues would be noticed by the gods? What other explanations can we attribute to them?
Is it a coincidence that Göbekli Tepe was built about 11,500 years ago during what is believed to be the dramatic collapse of the last glacial period.Allan and JB Delair, geologist and anthropologist at Oxford, describe a cosmic disaster which occurred 11,500 years ago; a cosmic disaster that reorganized the entire solar system and the Earth itself.