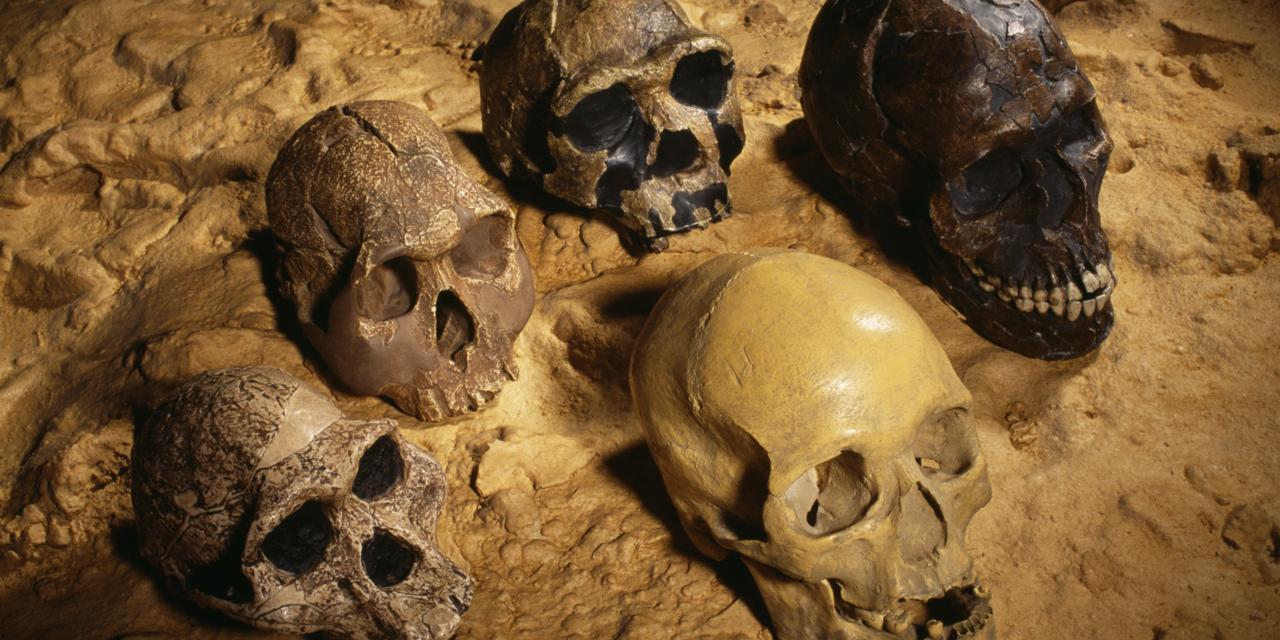 ^BHuman ancestor skulls.^b Five skulls belonging to some ancestors and relatives of modern humans. The three skulls at left are, from bottom left to top centre, ^IAustralopithecus africanus^i (3-1.8 million years ago), ^IHomo^i ^Ihabilis^i (or ^IH.^i ^Irudolfensis^i, 2.1- 1.6 mya) and ^IHomo erectus^i (or ^IH. ergaster^i, 1.8-0.3 mya, although the ^Iergaster^i classification is generally recognised to mean the earlier part of this period). The black skull at upper right is from a modern human (^IHomo sapiens sapiens^i) from the Qafzeh site in Israel, which is around 92,000 years old. The pale skull at lower right is from a French Cro-Magnon human, a later form of the same species, from around 22,000 years ago.

An ancient species of human from China, thought to be long extinct, likely survived until at least the last Ice Age 14,000 years ago, new research finds.

Since the timeframe of these so-called Red Deer Cave people, as well as Homo floresiensis (aka Hobbit humans) from Indonesia, overlapped for many years with that of Homo sapiens, it is possible — however remote — that a human not in our species could still exist.

“New species are being found all of the time by scientists, but with a large-bodied species like humans, you would think it would be difficult to miss, that someone would have reported it or a scientist found it somewhere (already),” added Curnoe. “My guess is if any did exist — and I’m doubtful — it would be in a remote place like Siberia, but some very grandiose claims have been made about Yetis and other creatures being Neanderthals surviving today in places like Siberia.”

Curnoe, co-leader Ji Xueping from the Yunnan Institute of Cultural Relics and Archaeology, and their team focused on China, however, for the recent finds. The research is outlined in the latest issue of the journal PLOS ONE.

The remains were excavated from Yunnan Province’s Maludong (“Red Deer Cave”) in 1989, but had lain unstudied in a southeastern Yunnan museum until now. The bones date to 14,000 years ago, according to the new analysis, and retain features of early human species like Homo habilis and Homo erectus. The researchers therefore think the Red Deer Cave people descended from one of those populations, but could represent their own unique species.

A thighbone suggests the Red Deer Cave people had a gait that was different than ours, but the precise movement has not yet been determined. The researchers, however, could deduce that these 110-pound small individuals lived at least part of the year at the cave, which was located in a tropical evergreen forest close to water. An abundance of deer bones showing signs of butchery were also found in the cave, along with evidence for large fires being built there.

Robin Dennell of The University of Sheffield’s Department of Archaeology told Discovery News, “There is no doubt the material found by Curnoe and Xueping is strange, and it does push the boundaries of what we think of as Homo sapiens. My take on it is that it may well represent an archaic population that resulted from interbreeding between Homo erectus and an early immigrant population of Homo sapiens.” 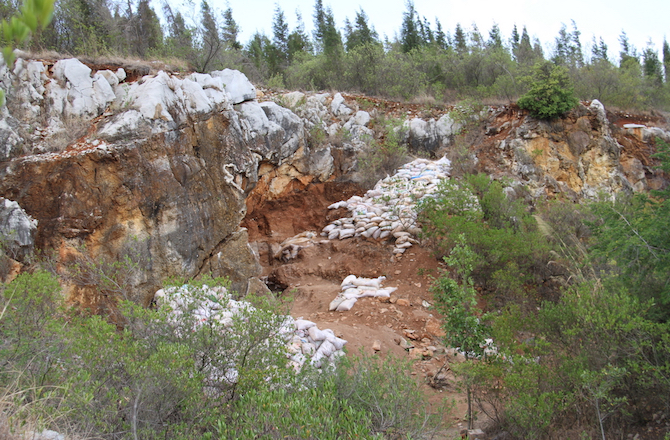 The Red Deer Cave (Maludong) was discovered during quarrying work and was excavated in 1989.
Ji Xueping, Darren Curnoe

He and other researchers confirmed that there is good fossil evidence that our species was in South China by 80,000-100,000 years ago, “so there is plenty of time now for an isolated hybrid to survive — and survive alongside younger populations of immigrant Homo sapiens,” Dennell said, adding that human evolution in East Asia is turning out to be a lot more complex than anyone had ever previously imagined. 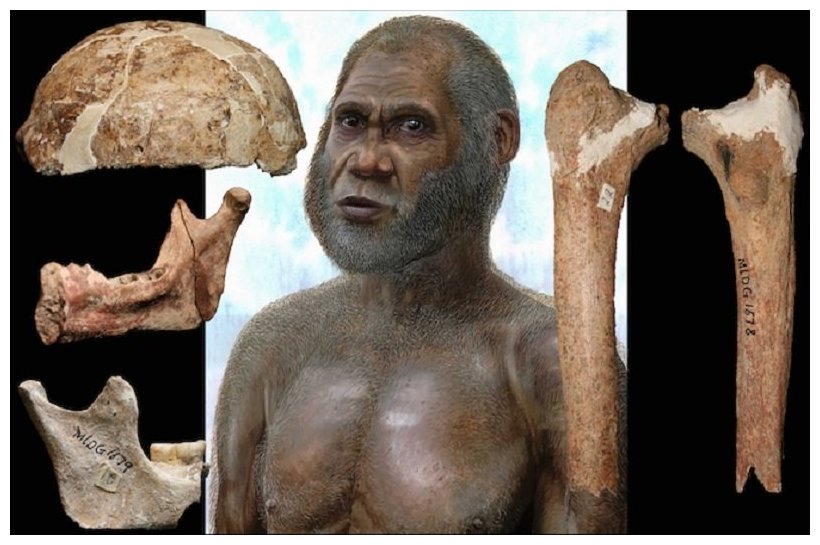 Colin Groves, a professor at the Australian National University’s School of Archaeology & Anthropology, also thinks it is possible that the Red Deer Cave people could represent interbreeding that occurred between our species and an archaic population.

The researchers do not believe that the Red Deer Cave people are still alive today, but all say it is theoretically possible that a non-Homo sapiens human-like population could still exist, given all of the past overlapping that occurred among different species on our family tree.

Homo floresiensis, for example, was thought to have lived until 12,000 years ago, but anthropologist Gregory Forth from the University of Alberta interviewed multiple Indonesian locals who knew of these “Hobbit humans” long before the archaeological finds and even had particular words to identify these “little not quite human people,” Groves said.

If the Hobbits went the probable way of the Neanderthals, however, then their cultures and genomes were simply absorbed into the modern Homo sapiens gene pool due to interbreeding. Nevertheless, it again cannot be fully negated that a human population not of our species still exists.

“So far the evidence has, to say the least, been far from convincing,” Curnoe said. “But we should always keep an open mind.”