These compelling images show ancient burials in Staryi Tartas village, in Novosibirsk region, where scientists have studied some 600 tombs. Dozens contain the bones of couples, facing each other, some with their hands held together seemingly for eternity. 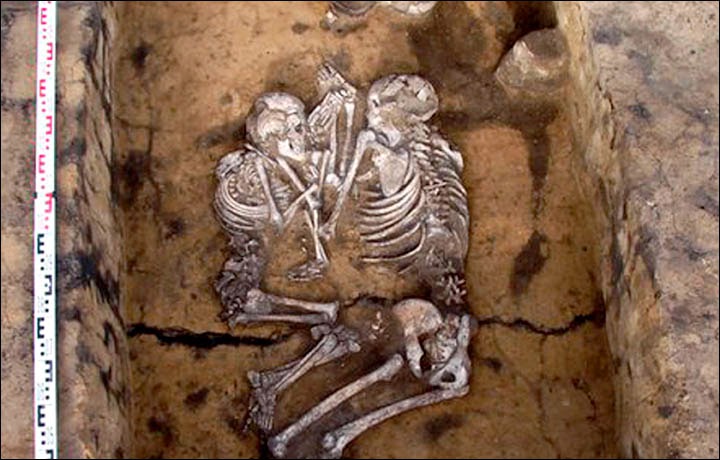 Others show men or women buried with a child or children. But why? Archaeologists are struggling for explanations and believe DNA tests will provide the answers to these remarkable burials which one writer Vasiliy Labetskiy described poignantly as skeletons in ‘post-mortal hugs with bony hands clasped together’.

As eminent academic Vyacheslav Molodin, 65, told The Siberian Times there are a number of theories about these Andronovo burials  – for example that after the man died, his wife was killed and buried with him – but for now the true reason remains unclear. Another version even suggests that some of the couples were deliberately buried as if in a sexual act, possibly with a young woman sacrificed to play this role in the grave.

‘We can fantasize a lot about all this. We can allege that husband died and the wife was killed to be interred with him as we see in some Scythian burials, or maybe the grave stood open for some time and they buried the other person or persons later, or maybe it was really simultaneous death,’ said Professor Molodin, Director of Research of the Institute of Archaeology and Ethnography of the Siberian Branch of the Russian Academy of Sciences. 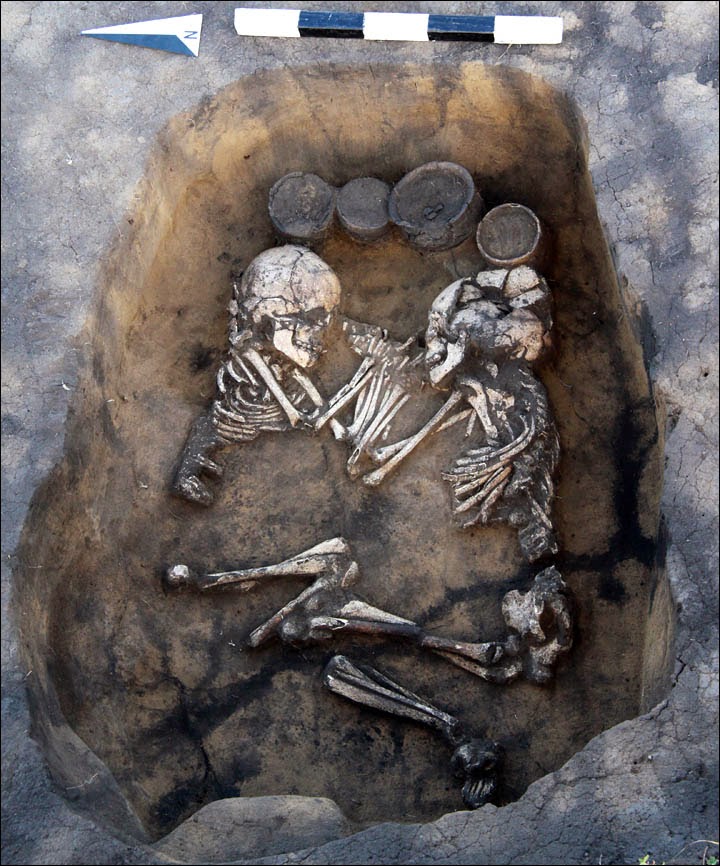 ‘When we speak about a child and an adult, it looks more natural and understandable. When we speak about two adults – it is not so obvious. So we can raise quite a variety of hypotheses, but how it was in fact, we do not know yet.’

Another theory is that especially the couples buried between the 17th and 14th centuries BC signify the beginnings of the nuclear family as a unit, so that in death they demonstrate the importance attached by these ancient people to this form of relationship.

‘This could be the case. But, you see, we need to firstly establish unequivocally the kinship of those who were buried,’ said Professor Molodin referring to the necropolis close to the confluence of the rivers Tartas and Om. ‘Until recently archaeologists had no such opportunity, they could establish only the gender and age. But now as we have at our disposal the tools of paleogenetics, we could speak about establishing the kinship.’ 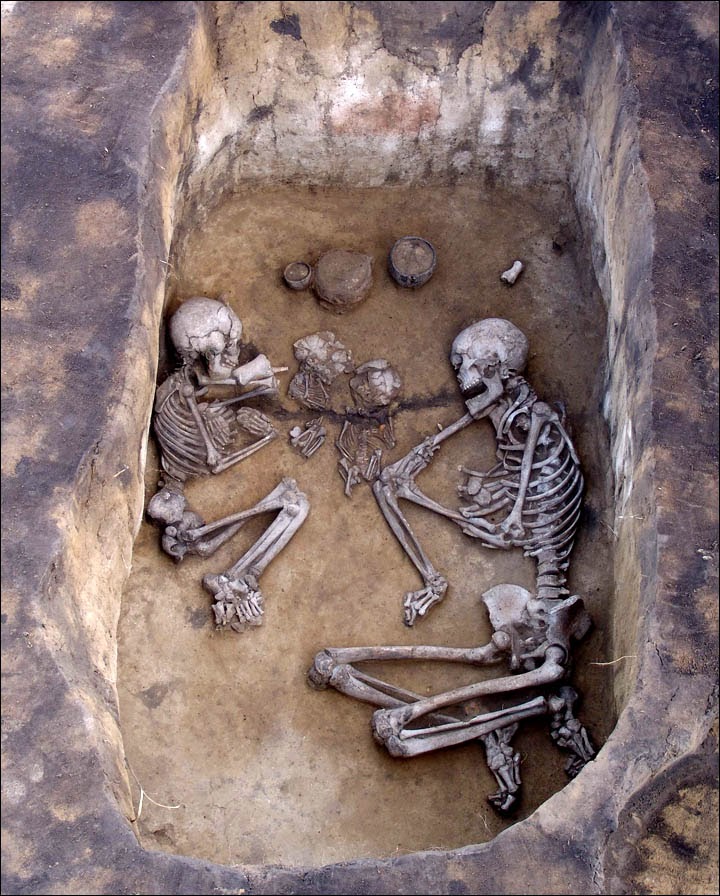 He hopes that ‘in the nearest future’ his researchers ‘will have significantly more data’. In five to ten years the secrets of these remarkable burials maybe revealed.

‘For example, we found the burial a man and a child. What is a degree of their kinship? Are they father and son or….? The same question arises when we found a woman and a child. It should seem obvious – she is the mother. But it may not be so. She could be an aunt, or not a relative at all. To speak about this scientifically we need the tools of paleogenetics.

‘We have a joint laboratory with the Institute of Cytology and Genetics, of the Siberian Branch of the Russian Academy of Science,  and we actively work in this direction. We do such analysis but it is quite expensive still and there are few specialists. We are also solving other questions with help of paleogenetics.’ 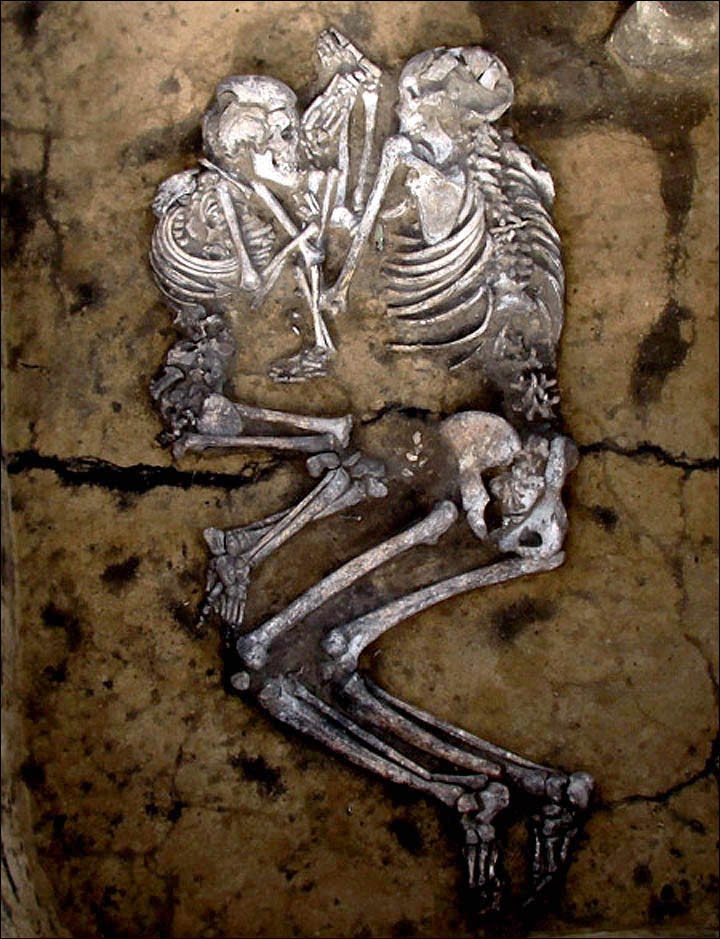 With such couple burials, Professor Lev Klein of St Petersburg State University has proposed they are linked to reincarnation beliefs possibly influenced by deeksha rituals in the ancient Indian sub-continent at the time when the oldest scriptures of Hinduism were composed.

‘The man during his lifetime donated his body as a sacrifice to all the gods,’ he wrote. ‘The ‘deeksha’ was considered as a ‘second birth’ and to complete this ritual the sacrificing one made a ritual sexual act of conceiving.’

In other words, in death a man should perform a sexual act to impregnate a woman. ‘Perhaps in the pre-Vedic period relatives of the deceased often sought to reproduce the ‘deeksha’ posthumously, and sacrificed a woman or a girl (or a few), and simulated sexual intercourse in the grave’. 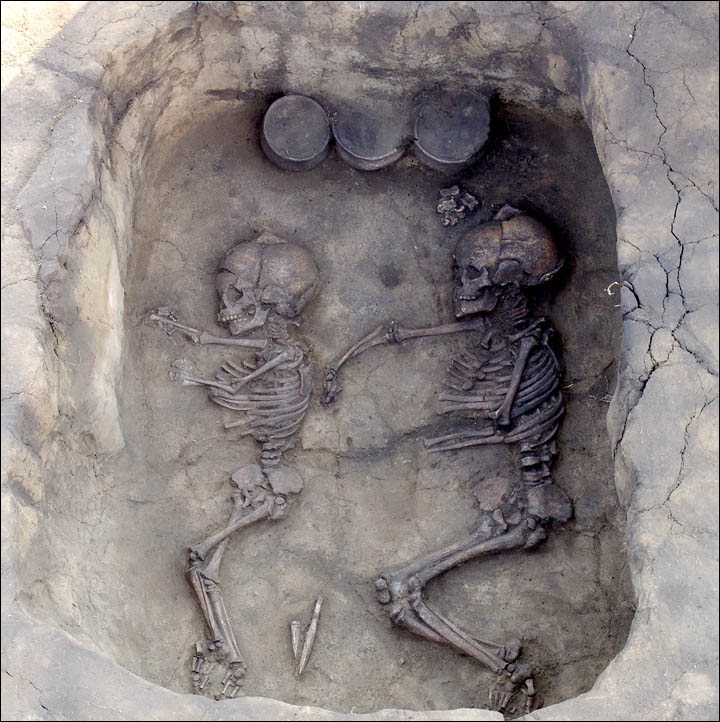 Professor Lev Klein of St Petersburg State University has proposed the coupled burials
are linked to reincarnation beliefs possibly influenced by deeksha rituals   [Credit: Institute of Archaeology and Ethnography of the Siberian Branch of the Russian Academy of Sciences]

There has been theorizing that on the man’s death, his wife was sacrificed and buried with him for posterity in an act of intimacy. Or, as Klein suggests, could a young woman have been sacrificed for this purpose, used to fulfil the female part in this ritual?

Professor Molodin doesn’t rule out this version, yet makes clear it is only a hypothesis. ‘It is again a suggestion. As a suggestion, it could be. This idea of Klein can be extended to Siberia too, because significant part of the researchers think that Andronovo people were Iranians.

‘So this hypothesis can be extended to them. But, I will repeat, it is only a hypothesis.’ 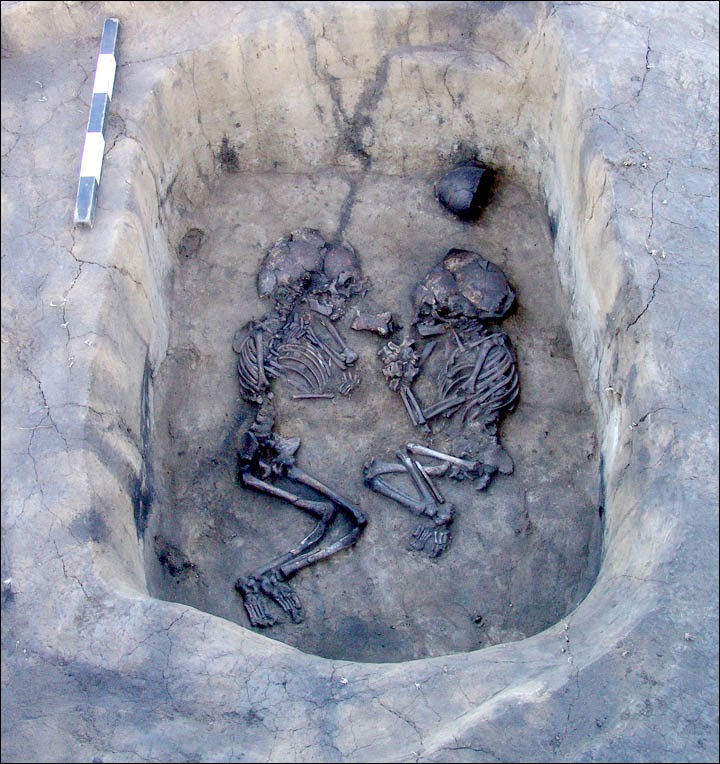 There are he says ‘a good number’ of these couple graves. ‘The number impresses. More that this, we see some interesting facts. For Andronovo culture, cremation is more typical, and here we can see such interesting combination like cremation and inhumation in one burial. Why it is so?

‘There is a version that they did not just pour the ashes into the grave, but made a doll and put the ashes in this. But we can not say for sure.  There are also burials with just several cremated remains. So it is more complicated than ‘They loved each other and died in one day’.’

He thinks that in most cases the couple graves were filled at the same time; so that it is not a case of a man dying and his wife being added to the grave when she died some years later. ‘It is very hard to say. I believe that all of them were buried almost at the same time, but on this necropolis we meet quite often robbed graves. And it turned out that one body was intact, and the second was damaged’. 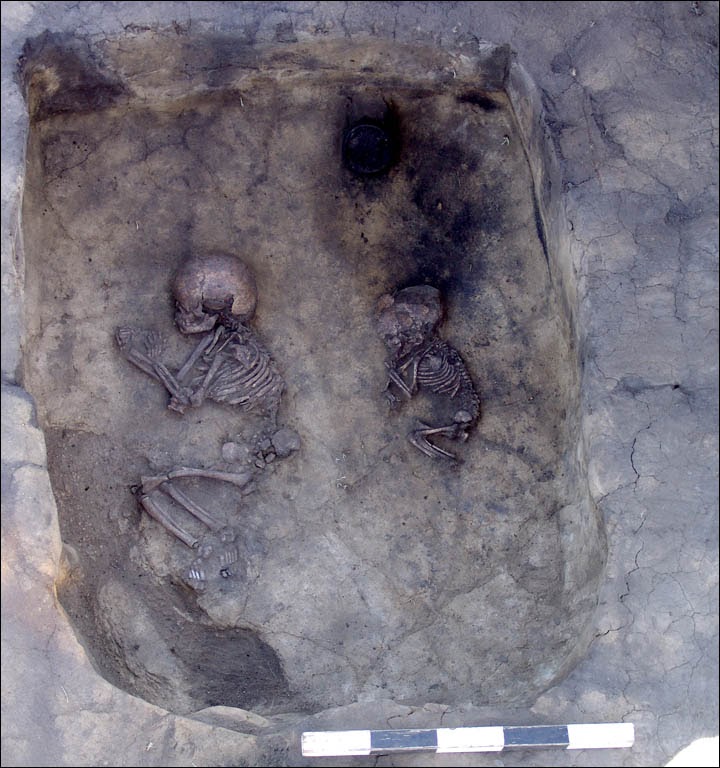 Archaeologists are struggling for explanations and believe DNA tests will provide the answers to these remarkable burials [Credit: Institute of Archaeology and Ethnography of the Siberian Branch of the Russian Academy of Sciences]

The couples were buried together with care, this much is clear. These were no hasty funerals after battles.

‘Along with the bodies were buried people’s belongings; not everything has survived, but some of the bronze decorations, ceramic pottery and armaments was found by archaeologists,’ recounted historian and writer Labetskiy.

‘Some of the pottery, with ornaments including … swastikas … belonged to people who were very different from native Siberians. Archaeologists classify them as the Andronovo archaeological culture. Their burials are recognised by the position of the body, which is crouched on the side, while locals buried people lying on the back.’

These incomers in western Siberia looked like Caucasian people, it is believed. They ‘bred cattle, were well acquainted with metallurgy and used the innovation of the times, carts and combat chariots drawn by horses’.

‘Grave goods consisted of pottery vessels, bronze ornaments, bronze daggers, ‘gaming pieces’ (horse phalanges and sheep astragals) and bone arrowheads, a special find was a four-sided stone mould for casting ear rings and pendants,’ states one account detailing co-operation between the Institute of Archaeology and Ethnography of the Siberian Branch of the Russian Academy of Science in Novosibirsk and the the Eurasia-Department of the German Archaeological Institute.

As Labetskiy wrote: ‘Archeology can’t answer all these questions precisely, at least not yet. Behind Andronov burials lay extraordinary stories about travels and discoveries, about human destinies and the destinies of whole civilisations.’

There is, he argues, ‘a certain beauty in this unfinished story’ conjuring for him the Welsh poet Dylan Thomas’ classic ‘And Death Shall Have No Dominion’.

‘The best fairytales have always ended ‘They lived happily ever after, and died on the same day’.

‘It is quite astonishing how the fairytales become life, as the bronze burials tell us a story how some people were not divided even by death’.
Author: Anna Liesowska   Source: SiberianTimes.com