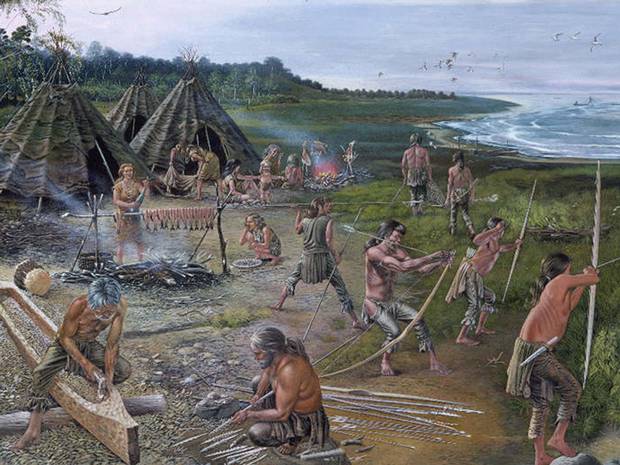 Archaeologists are searching for the lost tribes of prehistoric Britain – at the bottom of the North Sea.

In a unique and ground-breaking operation, scientists plan to search for evidence of Stone Age human activity on Britain’s very own ‘Atlantis’ – a vast prehistoric land, once located between England and southern Scandinavia, which was engulfed by rising sea levels some 7500 years ago.

The archaeologists hope to find evidence of flint tool manufacture, plant pollen and the DNA of plant and animal species used by the  long-lost land’s ancient inhabitants. Due to be launched later this month, the multi-million pound project is the largest of its kind ever attempted anywhere in the world and will lead to the development by British scientists of an entire range of new scientific techniques and capabilities.

Past survey work in the  southern part of the North Sea has identified some of the vanished territory’s original river valleys – and it is two of those now-long-drowned valleys that the scientists will target in their search.

They plan to recover ancient pollen, insects and plant and animal DNA and to use high definition survey techniques to accurately rediscover what the lost Stone Age landscape looked like, what vegetation flourished there and how humans impacted on and used the environment.

The project will reveal, for the very first time, the culture and lifestyle of the dozens of generations of prehistoric Brits who flourished there for 6000 years until it finally disappeared beneath the waves in the mid sixth millennium BC.

This real British Atlantis originally covered some 100,000 square miles of what is now the North Sea  (a long-lost territory around the size of modern Britain).  However, following the end of the Ice Age, thousands of cubic miles of sub-Arctic ice started to melt and sea levels began to rise worldwide. The major period of ice melt and consequent sea level rise,  that specifically affected the southern part of the North Sea region, occurred between 8000 BC and 6000BC.

During that period of sea level rise, what were then coastal zones became increasingly vulnerable to catastrophic flooding. It is likely that massive storm surges – some up to 15 foot high – would have devastated large areas, probably on average around four times a century. 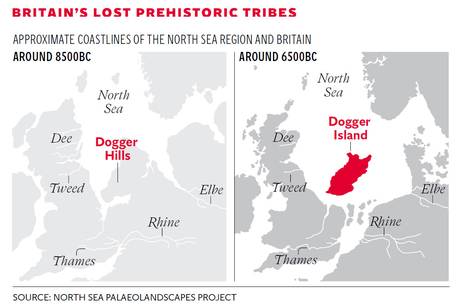 Due to the concentration of human hunter-gatherer activity in food-rich coastal and estuarine areas, such surges would have almost certainly drowned hundreds of people each time.

Gradually, most of the 100,000 square miles became permanently inundated – and by 6500 BC, the remnants of the dwindling North Sea territory had become a 140 mile long, approximately 100 mile wide island covering thousands of square miles (partly where the North Sea’s Dogger Bank is today). But, over the centuries, it gradually shrank and was finally overwhelmed by the  waves in around 5500 BC. It is conceivable that at least some of its last inhabitants would not have been able to escape.

It’s hoped that their research will reveal where the inhabitants lived, what they ate and what their environment looked like.

The expedition also hopes to discover whether they were culturally more advanced than previously believed. Plant DNA, recently obtained from another ‘drowned’ landscape (the Solent, between the Isle of Wight and  mainland England) suggests that Stone Age people in that area  were eating (and therefore importing or possibly growing) wheat some 2000 years earlier than previously thought.

Now the scientists plan to systematically search for similar wheat or other domesticated species DNA  evidence in what was once dry land under the North Sea.

Within the next few weeks the scientists will start sinking bore holes into the  drowned Stone Age land surfaces in order to extract samples of ancient earth.

Hundreds of such samples will be taken to the laboratories at the universities of Bradford, Warwick, Lampeter, St. Andrews and Birmingham where scientists will separate out seeds, pollen, potential DNA material and tiny fragments of broken flint (the tale-tale evidence of flint tool manufacture).

Using sonar and high definition seismic equipment, the archaeologists will also produce more refined 3D maps of the original landscape and its topography. It’s conceivable that they may even locate  man-made Stone Age structures, potentially the remains of any timbers used for ritual monuments or hunting drive-ways.

The project may also revolutionize the world’s understanding of the spread of agriculture. Until very recently all the available evidence suggested that once agricultural knowledge had reached an area, it quickly triggered rapid economic and social change. But the recent very early wheat DNA evidence from the Solent, if confirmed in the upcoming ‘North Sea Atlantis’ investigation, would totally contradict that understanding of the process. Instead, it may be that agricultural knowledge spread widely at least 2000 years earlier than previously thought but had no significant economic or social impact for scores of generations.

The research will also, for the first time, reveal how humans and other animal and plant species adapted to the sea level rise catastrophe which hit many areas of the world after a natural version of ‘global warming’ brought the last Ice Age to an end.

Bradford and Nottingham  universities are now developing new computer software that will enable them to accurately model how plants, animals and ultimately humans recolonized much of Britain (including Britain’s North Sea Atlantis) after the extreme cold of the Ice Age – and how species then tried to adapt to  rising sea levels and periodic salt water infiltration and flooding that increasingly resulted from it.

The archaeologist leading the entire North Sea investigation, Professor Vince Gaffney of the University of Bradford,  believes that the project will transform the academic world’s understanding of how northern Europe was re-colonized by humanity when climatic conditions became warmer some 12,000 years ago.

“As conditions got warmer, there was a period of just a few thousand years when large areas of Europe’s continental shelf were recolonized by Stone Age humans,” said Professor Gaffney.

“Because these areas of continental shelf became sea, they have been inaccessible to archaeologists until now.

“However, this project will access new data at a scale never previously attempted.  Novel mapping, DNA extraction and computer modelling representing people, animals and even individual plants will  generate a 4 dimensional model of how Doggerland was colonised and eventually lost to the sea.