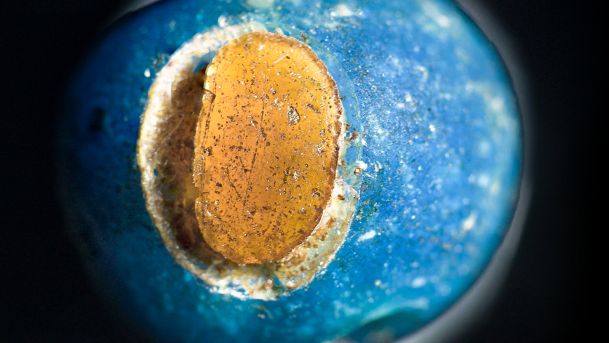 An elaborate glass bead with amber embedding found in a 3400-year old Danish grave turns out to have come from ancient Egypt. (Credit: Roberto Fortuna and Kira Ursem)

Stunning glass beads found in Danish Bronze Age burials dating to 3400 years ago turn out to have come from ancient Egypt – in fact, from the workshop that made the blue beads buried with the famous boy-king Tutankhamun. The discovery proves that there were established trade routes between the far north and Levant as early as the 13th century BCE.
Twenty-three of the glass beads found in Danish Bronze Age burials by the team of Danish and French archaeologists were blue, a rare color in ancient times. “Lapis lazuli was the most precious gemstone in Nordic Late Bronze Age. Blue glass was the next best thing,” Jeanette Varberg, who is associated with the research, told Haaretz. “In the north it must have been almost magic. A piece of heaven.” (Lapis lazuli is a deep blue semi-precious gemstone.)

The blue beads aren’t the only evidence of trade between ancient Denmark and the region. Altogether 271 glass beads have been found at 51 burials sites in Denmark, the majority of which originated from Nippur, Mesopotamia, about 50 km southeast of today’s Baghdad in Iraq.

One of the blue glass beads was found with a Bronze Age woman buried in Olby, Denmark, in a hollowed oak coffin wearing a sun disc, a smart string skirt decorated with tinkling, small bronze tubes (a decoration on the cords, placed at the front of the skirt), and an overarm bracelet made of amber beads. She had evidently been quite well to do. 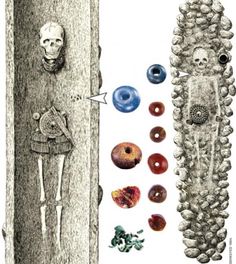 Another blue bead was found in a necklace together with four pieces of amber, in the burial of another woman. The 23 blue glass beads were analyzed using plasma-spectrometry, a technique that enables comparison of trace elements in the beads without destroying them. The analysis showed that the blue beads buried with the women turned out to have originated from the same glass workshop in Amarna that adorned King Tutankhamun at his funeral in 1323 BCE. King Tut´s golden deathmask contains stripes of blue glass in the headdress, as well as in the inlay of his false beard.

Glass beads were a luxury adornment in ancient Egypt. They were not especially prevalent, except in the graves of the elite where the selection was choice but limited in quantity. It may seem inexplicable how cobalt beads fit for kings could end up in Nordic burials. But Kaul Flemming and Jeanette Varberg speculate that the two ancient lands traded the luxury glass beads for amber.

“Denmark is rich in amber and it was the primary exchange item from the North,” said Varberg.

One of the blue glass beads was found with a Bronze Age woman buried in Olby, Denmark, in a hollowed oak coffin. (image Credit: Roberto Fortuna and Kira Ulsem) 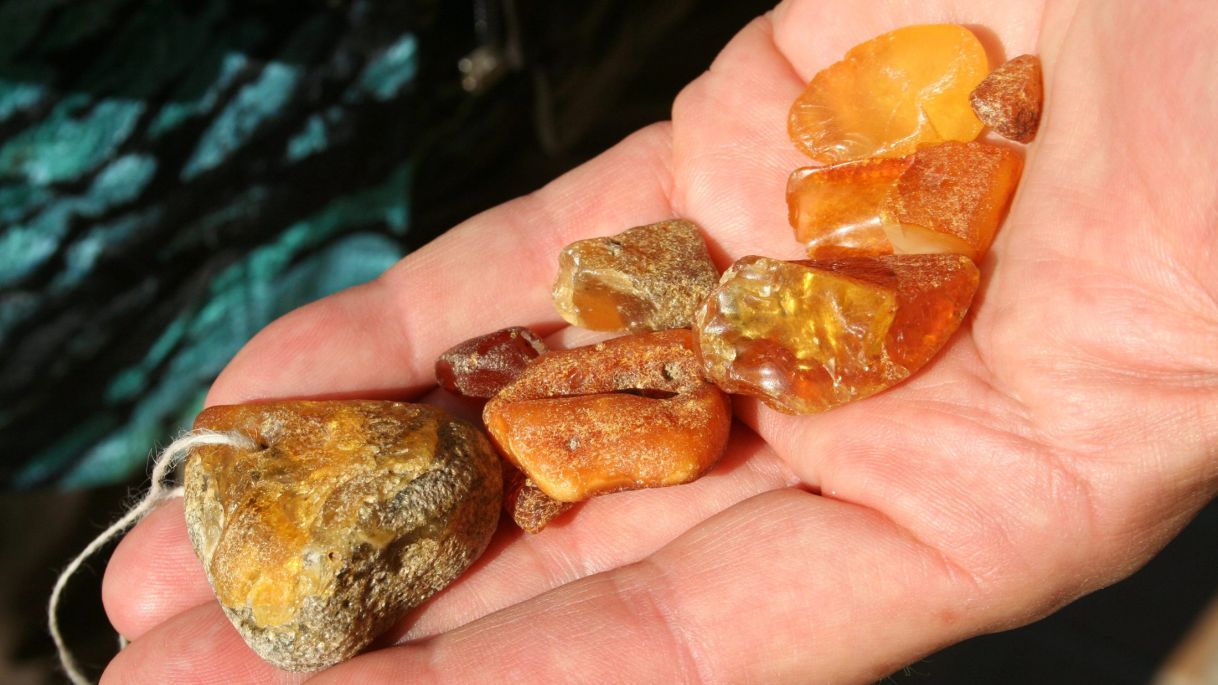 Amber, which is fossilized tree resin, was associated with the Sun God – in both ancient Egypt and the Nordic areas, it seems.Moshe Gilad. (Credit: Roberto Fortuna and Kira Ursem)

The Egyptian and Mesopotamian glass beads found in the graves in Denmark indicates that trade was established already 3000 years ago, and conversely, Nordic amber has been found as far south as in Mycenae, Greece and at Qatna, near Homs in Syria.

Together with other finds such as Cypriot copper found in Sweden, the picture of an elaborate trade system emerges. Also, Nordic amber beads as well as beads made of Egyptian glass and copper ingots formed part of the precious cargo of the ship wrecked at Uluburun, outside the coast of Turkey.

“The glass beads travelled along the same roads as the amber. The glass came from Mesopotamia and Egypt to the North while the amber came from the north and reached the most distant part of the Mediterranean and even beyond,” Kaul Flemming told Haaretz. However the glass exchange almost stops around 1177 BCE – probably due to attacks by the Sea Peoples.

“Trade systems in the Eastern Mediterranean seem to have collapsed around 1200 BC, which must have been due to troubled times, perhaps war and strife, and the emergence of the Sea Peoples.

This collapse can also be observed in the Nordic burials. Fewer glass beads seem to have reached the north,” said Flemming, and adds, “However an interesting phenomena occurred at the same time in Italy. In the Po Valley, new workshops arose, where they turned glass into glass beads. There are also large workshops where they processed Nordic amber from natural lumps into finished gems.” 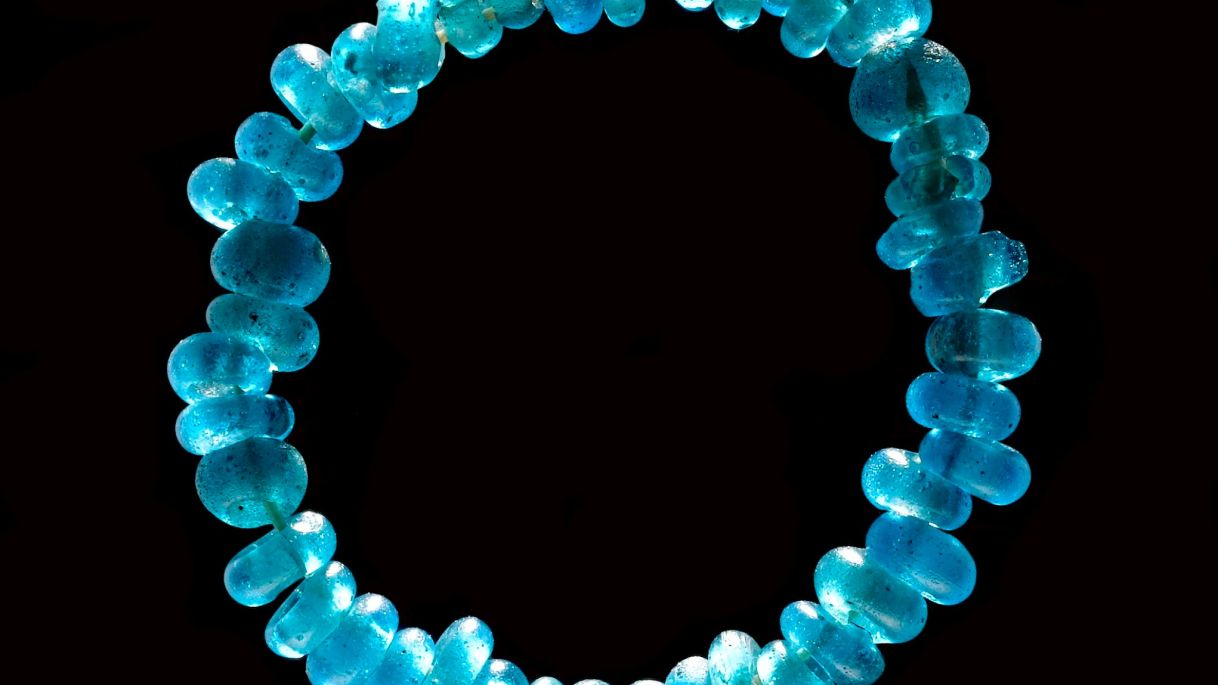 The women buried in ancient Denmark were interred with jewelry, such as this blue glass necklace. (Credit: Roberto Fortuna and Kira Ursem)

The Danish researchers believe the blue glass beads deposited in the graves had religious significance. Also, glass and amber seem to be closely linked, in the North as well as in the South. “The glass and amber beads were found closely together, part of the same piece of ornament, as a part of a necklace or at the left arm,” says Flemming.

The juxtaposition of the glass and amber was not coincidence, the archaeologists believe. Particular social values would have been conveyed by wearing the two substances together: it was people at the highest levels of society who controlled the collection and distribution of amber, benefited from its export, and who were the receivers of the valuable and exotic glass beads.
Beyond the social signal, Varberg  and Flemming believe that glass and amber beads may have shared symbolic or magical values that made it beneficial to carry them together.

The translucent, golden amber would probably have conveyed solar symbolism.

Generally, the color blue was associated with the heavens and with water, sea, lakes and rivers. In Ancient Egypt, blue was more specifically associated with life and rebirth, and represented (the fertility of) the Nile, the heavens, and also the primeval waters from which the sun, Ra, was born or created. Thus, in Egypt the color blue was related to creation myths, as well as to the re-birth of the sun every morning.

“If we allow ourselves to consider such mythological and connected magical properties of glass and amber in the Bronze Age North, then it should not be difficult to recognize the magical values of these materials being enhanced when carried closely together, says Flemming and adds, “In a mysterious way, the color of amber and the color of the glass might have – when working together – provided a sort of a narrative of the myth related to the eternal voyage of the sun: In the heavens, in underworld depths of the waters including the sea.” 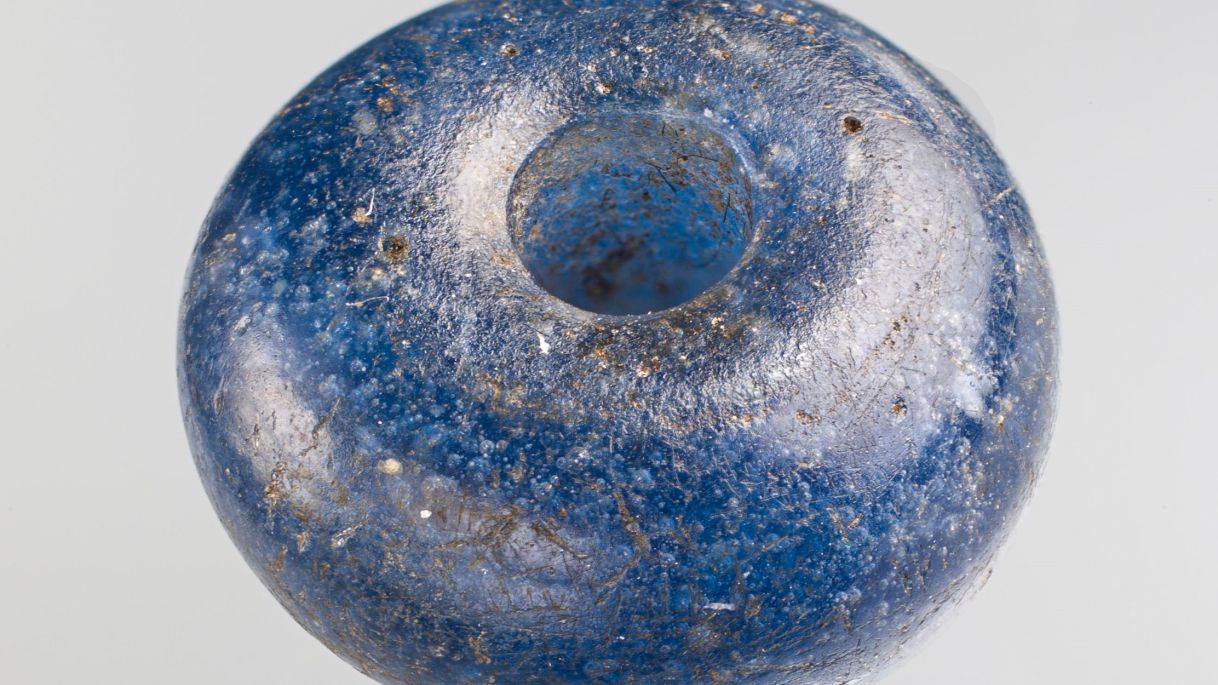 A glass bead found in a 3400-year old Danish grave turns out to have come from ancient Egypt. (Credit: Roberto Fortuna and Kira Ursem)

“The sun cult in the Nordic bronze age has resemblance to the Egyptian religion,” concludes Varberg. “And yes, I see clear evidence of ideas travelling along the same exchange routes as amber and glass.”

Imported glass beads from Egypt and Mesopotamia have also been found in Israel. Roni Hoofien at Tel Aviv University is constructing a new typological system and tracing manufacturing techniques and raw material provenance using the beads assemblage of Tel-Azekah, in the Judean Shepelah. “Because of the close proximity of Tel Azekah to Egypt, we believe that the glass beads were imported from Egypt,” she said.