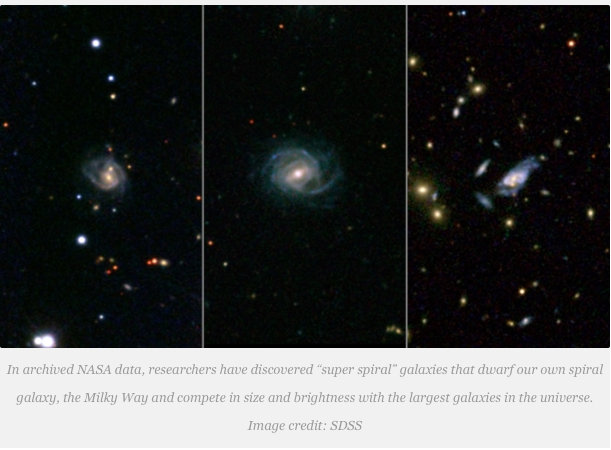 Astronomers have just made an incredible discovery as the stumbled across ‘Super Spiral Galaxies’ that were missed somehow in previous searches. The new galaxy is a completely new type of galaxy dubbed ‘super spiral’.

The mysterious galaxies are the most luminous found to date and shine around fourteen times brighter than our galaxy, the Milky Way.

These super spiral-shaped galaxies had remained hidden from view for a long time, imitating the appearance of ordinary spiral galaxies. However, a new study based on data from NASA reveals that these celestial objects which appear relatively close, are really far apart and are monstrous versions of the spiral galaxies that are seen every day.

“We have found a previously unrecognized class of spiral galaxies that are as luminous and massive as the biggest, brightest galaxies we know of,” said Patrick Ogle, an astrophysicist at the Infrared Processing and Analysis Center (IPAC) at the California Institute of Technology in Pasadena and lead author of a new paper on the findings published in the Astrophysical Journal. “It’s as if we have just discovered a new land animal stomping around that is the size of an elephant but had shockingly gone unnoticed by zoologists.”

While searching through NASA’s NASA/IPAC Extragalactic Database (NED) a team of researchers was looking for massive galaxies located within 3.5 billion light-years from Earth.

The team of researchers expected to discover ellipticals – ancient galaxies which when viewed from Earth appear smooth and three-dimensional unlike spiral galaxies which appear flat—when, to their astonishment, they found that out of the 800,000 sample galaxies, 53 of the brightest were spiral shaped.

Talking about the discovery in an interview, Dr George Helou, from the California Institute of Technology said: “Remarkably, the finding of super spiral galaxies came out of purely analysing the contents of the NED database, thus reaping the benefits of the careful, systematic merging of data from many sources on the same galaxies.”

“NED is surely holding many more such nuggets of information, and it is up to us scientists to ask the right questions to bring them out.”

Researchers estimate that ‘super spirals’ can shine with an intensity anywhere from eight to fourteen times the brightness of the Milky Way. interestingly, these galaxies possess as much as 10 times the mass of our galaxy, while their mysterious, starry disks, stretch from twice to as four times the width of the Milky Way’s approximate 100,000 light-year-wide disks.

Researchers report that Star formation rate within super spiral galaxies is as high as a whopping 30 times that of our own galaxy.

Scientists have also discovered that four out of the fifty-three galaxies,  seen by Ogle and his team contain TWO galactic nuclei while most galaxies contain only one. Scientists believe that double nuclei are a telltale sign of two galaxies that have recently fused.

“Super spirals could fundamentally change our understanding of the formation and evolution of the most massive galaxies,” said Ogle. “We have much to learn from these newly identified, galactic leviathans.”