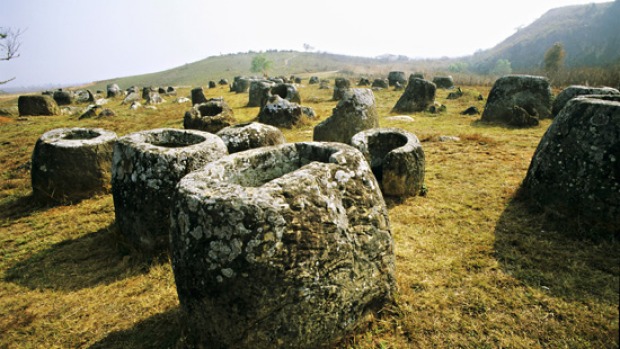 The Plain of Jars in northern Laos is home to a 2000-year-old mystery. Photo: AFP

ARCHAEOLOGISTS FROM THE Australian National University (ANU) are shedding light on an ancient civilisation after unearthing an Iron Age burial ground in Laos’s mysterious ‘Plain of Jars.’

Throughout central Laos – a South East Asian country landlocked by Vietnam, Cambodia, Myanmar, Thailand and China – there are 85 sites each containing between one and 400 huge, stone jars, estimated to date back to between 600BC and 500AD, but their purpose has largely remained unknown.

In February, a team of archaeologists spent five weeks excavating a particularly well-known site frequented by tourists near Phonsavan – the capital of the province of Xieng Khouang – where they discovered 384 stone jars and human remains. 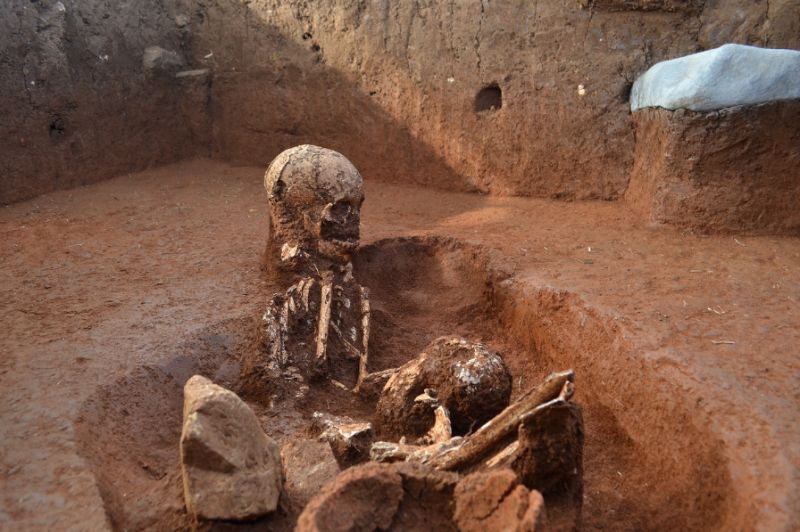 It is the first major excavation of Laos’s ‘Plain of Jars’ since the 1930s, and is a timely endeavour, as the Laos Government is hoping to have the site put on the UNESCO World Heritage list.

Lead researcher Dr Dougald O’Reilly says the jar sites – many of which are remote and difficult to access – have remained an archaeological enigma and under-researched for a long time. “It’s really high time that some attention was turned to these,” he said.

The five-year research project – funded by the Australian Research Council – is a multinational venture led by ANU in conjunction with James Cook and Monash universities and the Lao Ministry of Information, Culture and Tourism.

“Monstrous, multi-tonne stones”
Dougald spent the majority of his career studying Cambodian Iron Age sites, but a trip to Laos in the late 1990s saw him captivated by the mystery of the jars.

The jars – which ranged from about 1m to 3m tall and 70cm to 2m in diameter – appeared to be made from the type of stone found at the nearest quarry, some adorned with carvings of human and animal figures.

“They would carve them in situ at the quarry, then bring them to the selected location where they wanted to set them up – whatever reason that was we can’t really determine at this point,” Dougald said. 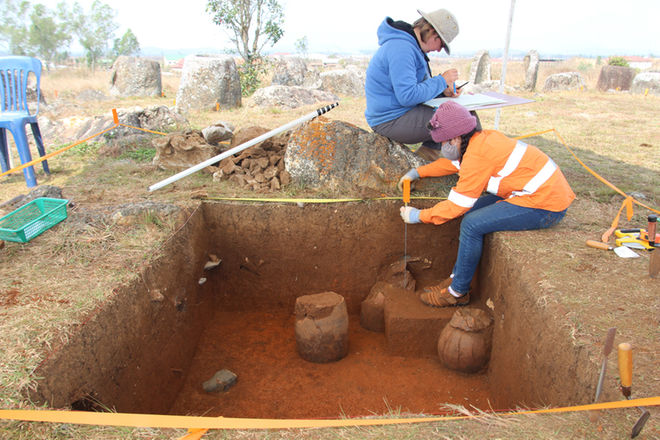 Ancient burials revealed at mysterious Plain of Jars are thought to date from about 500 or 600 BC to 550.   Source: ANU

“But certainly in the order of eight or ten kilometres in some cases they were dragging these monstrous, multi-tonne stones to place them in the landscape,” he added.

Research indicates the jars were used for mortuary purposes, with one theory speculating their role in corpse preparation for secondary burials – being used to decompose flesh before the bones were removed and buried nearby.

Three distinct types of burials were also discovered at the site – bones placed in ceramic vessels, pits full of bones with limestone blocks placed over them and a primary burial, where a body was placed in a grave – a first for any of the 85 sites.

Tapping into an ancient culture
With the sites so under-researched, the project is all-encompassing, with researchers studying the area’s geology, the morphology and use of the jars as well as undertaking carbon dating, isotopic research and genetic analysis of the remains.

They also want to provide insight into the ancient culture – and hope an excavation at a second site in 2017 will provide comparative samples between the two and flesh out some of their research questions – such as who exactly was being buried at the sites.

“We’d hope to be able to tell a little bit about perhaps where the people came from, where they lived, and paint a more robust picture of their mortuary traditions and the health of the people as well, if we can discern that,” Dougald said.*