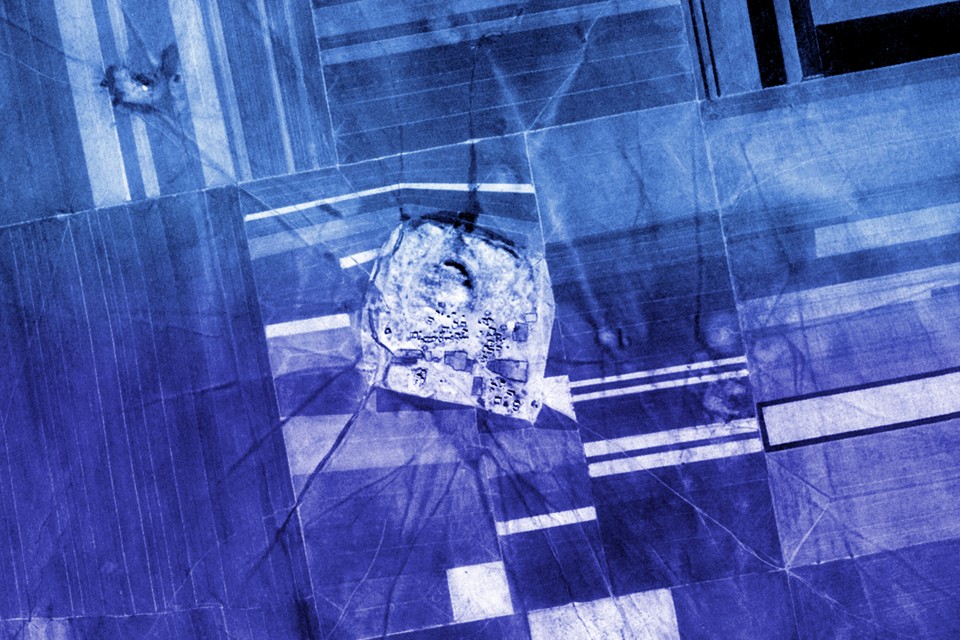 Michelangelo Antonioni’s 1966 film Blow-Up features a wayward London fashion photographer called Thomas who unwittingly documents a murder. Hidden in the blurred background of one of his most recent photographs is a detail so obscured by shadows and foliage that, at first, Thomas does not even see it. Only after he repeatedly blows up the image, zooming in over and over again on this otherwise minor feature, is the disturbing truth revealed: a terrible crime has been committed and this photograph has made Thomas an unexpected witness. The most important thing in the photo had been concealed in the background all along.

It was revealed earlier this month that declassified U.S. spy satellite photographs taken above the Antarctic have inadvertently also documented how that continent has been affected by climate change. In this case, deep in the archives of national intelligence agencies are satellite photos half a century old in which scientifically useful data has been hiding in plain sight. These now-outdated spy photographs have thus found an unexpected second life as important tools of planetary science—and, like Thomas’s photo in Blow-Up, their background details have proved at least as, if not far more, valuable than their original purpose.

A group of researchers, led by Shujie Wang at the University of Cincinnati, explained that classified photographs taken by the CIA’s ARGON satllite platform in the early 1960s have, upon reevaluation, added decades’ worth of visual evidence through which glaciologists can track the melting of Antarctica’s ice sheets. Building on earlier analyses of these same satellite photos performed by teams at other institutions, Wang’s group demonstrated that the images have pushed back the start date for large-scale Antarctic melting by at least three decades. In other words, these seemingly featureless expanses of ice captured merely as an incidental detail during Cold War surveillance missions now offer significant new insights into how Earth’s polar regions are responding to climate change.

While Wang’s work focuses specifically on precursor evidence for the 2002 collapse of the Larsen B ice shelf, the larger takeaway of her team’s approach is that it can be remarkably easy to overlook unusual data sets simply because of their original context. How can you find something if you don’t even know you’re supposed to be looking for it? As this work shows, however, a satellite photograph taken for reasons of international espionage is technically identical to a satellite photo taken for reasons of g laciology. In a very real sense, the only difference comes from what a viewer chooses to focus on.

Archaeologist Jesse Casana describes arriving at this realization in his own field by using the metaphor of turning swords into ploughshares—that is, transforming what is essentially a weapon of the Cold War into a tool of civilian research. Casana spoke to me about the CORONA satellite program, in particular. The CORONA photographs are the earliest available spy satellite images, taken for roughly a decade beginning in the late 1950s. When they were declassified by the Clinton Administration in 1995, nearly 900,000 previously top secret satellite images became available for public research with the stroke of a pen.

Archaeologists were amongst the first to pounce.

Casana described the CORONA imagery with undisguised enthusiasm. “CORONA is an amazing tool for archaeological discovery, in general,” he said—but the engineering feats that made the photographs possible in the first place are equally awe-inspiring. The satellites’ camera systems, for example, relied on special, high-definition film developed in secret by Kodak. An exposed roll of this ultra-sensitive film would then need to be physically recovered from its satellite in order to be processed. This meant that individual film canisters would be jettisoned from orbit; as the film fell back to Earth, a tiny parachute would pop open, usually somewhere over the Pacific, and the canister would then drift back down through the atmosphere. A U.S. military airplane armed with a skyhook would then grab the film during descent and bring it back to the ground for processing. These complex aerial acrobatics are almost laughably archaic by today’s standards, but they also reveal how much effort the U.S. exerted in keeping tabs on Soviet arms buildups and on the internal activities of other nation-states.
As Casana pointed out, the declassification order came after heavy lobbying from Robert McCormick Adams, an archaeologist and, at the time, Secretary of the Smithsonian Institution. Adams knew the historical value of these photographs, but he also knew that, in the 1990s, with the Soviet Union no longer in existence, they no longer played any real strategic role for U.S. intelligence. Best of all, Casana pointed out, the CORONA photos also captured landscapes throughout the Middle East in a primarily pre-industrial state, before surface ruins or subsurface remnants had been permanently destroyed by 20th-century urbanization, agriculture, or even acts of war. “The old satellite imagery from the 1960s or earlier often preserves a picture of these sites and features that, in many cases, no longer exist today,” Casana told me. The photographs, in other words, are often the only physical record archaeologists now possess. 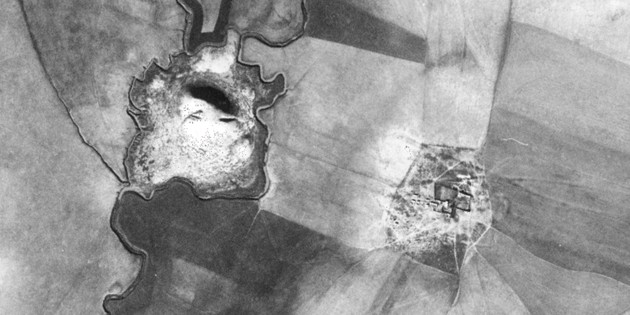 Casana is director of the CORONA Atlas Project, an attempt to methodically and systematically identify all sites of archaeological interest in the backgrounds of these images. Archaeologists are poring over each image, looking for anomalous landscape features, such as unusual lines or odd patterns. The numbers so far have been astonishing. Together with other recently declassified U.S. satellite photos—from the ARGON, HEXAGON, GAMBIT, and LANYARD programs—the images include shots of roughly 4,200 previously known sites. However, archaeologists have now identified as many as 12,000 new sites of potential historic interest. Satellite photos originally taken for international espionage have truly been “a bonanza for archaeology,” in Casana’s words.

Mining this resource for its archaeological riches is, however, a time-consuming affair. In theory, archaeologists could follow the lead of firms such as Orbital Insight and program a machine-vision algorithm to help identify unknown historic sites in these photos. Analyzing hundreds, if not thousands, of photographs at a time, archaeologists of the future could then work side by side with AI.

Although Casana agreed that this kind of “automated detection” has its uses, using pattern recognition to detect traces of ancient civilizations poses a considerable challenge. We simply might not know what we’re looking for, Casana emphasized, let alone what we’re looking at, even as we stare directly at a promising archaeological site. A structure might have weathered peculiarly, for example, or it might have been constructed in an unusual pattern in the first place. It could be from a previously unknown culture or civilization. To use machine vision, at least for now, you would have to limit yourself to known landscape features of a very regular size and type. “Finding things that are different or unusual or that don’t fit the pattern,” he warned, “are precisely the kinds of tasks that those machine-learning methods are the worst at.”

Casana is not alone in his approach, hoping to rediscover a lost ancient past by way of the sky. Articles about remote sensing appear regularly in academic publications, and, in 2013, Springer published two hefty compilations exploring Archaeology from Historical Aerial and Satellite Archives and Mapping Archaeological Landscapes from Space, respectively. Many other archaeologists today, including Sarah Parcak, have also helped pioneer space-based landscape research, primarily using state-of-the-art satellite imaging. Parcak, for example, has used satellite data to help find the likely site of buried Egyptian pyramids, and she was also part of a team that detected new evidence of an urban site near Petra, deploying both modern satellite imaging and drones. Further afield, Parcak also helped to discover a previously unknown Viking settlement in southwest Newfoundland, a find greatly assisted by having access to a modern eye in the sky.

Jason Ur, director of the Center for Geographic Analysis at Harvard, has also used declassified CORONA photographs in his archaeological research. Like Casana, Ur is enthusiastic about the potential of this sort of imagery, but he noted that one major limitation inherent to this analysis is that it is, inevitably, biased toward “features that persevere in the landscape.”

“The kinds of features that survive for us to find, however, are often the products of very powerful, centralized governments from the earliest empires,” he explained. “They built large walled cities; they excavated elaborate irrigation systems that ran dozens of kilometers; they built roads.” The traces left by minor paths, seasonal campsites, and other ephemeral terrains generated by everyday human movement frequently fall outside the imaging capabilities of satellites. Space-based archaeology can thus inadvertently be biased toward an analysis of empires, not pastoralists, of centers, not peripheries.

While the CORONA images are undeniably valuable, they will not necessarily reveal subtle landscape effects on the remote edges of these once-great empires. Like Thomas in Blow-Up, archaeologists can pore over endless archives of photographs, zooming in to ever-more extreme levels of resolution to find traces of walls, foundations, and lost cities, but the other cultures Jason Ur told me about—the pastoral nomads, the marsh-dwellers—won’t necessarily show up on film. To learn more about them, archaeologists must still rely on good, old-fashioned digging.