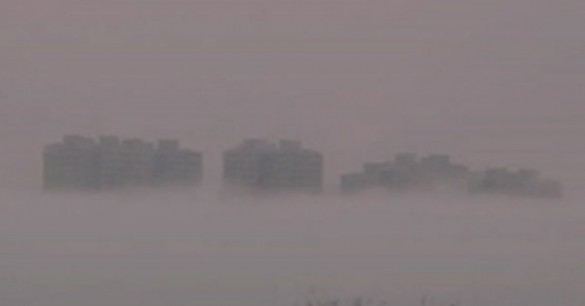 Another set of images and video recordings has surfaced on the internet showing that appears to be yet another mysterious ‘floating city’ filmed in the clouds above Dalian in northeast China’s Liaoning Province on Friday.

Dozens of people rushed to take images and videos of the mysterious phenomenon as the watched in awe towering skyscrapers appearing in the clouds. The ghost-like buildings appeared out of nowhere along the port of Dalian and remained in the sky for several minutes.

While reports in China indicate the abnormal phenomenon was witnessed by thousands, so far only a couple of videos air been posted online showing the crazy moment a city appears hovering in the sky.

This mysterious sighting isn’t the first time a ‘floating city’ appears in the sky, which has led many people to speculate what causes the mysterious cities to appear in the sky. While some believe it has to do with some sort of secret government project, others believe we are looking at glimpses of a parallel universe, while more skeptical viewers believe it’s just an illusion.

A mirage or Fata Morgana is a form of mirage that can be seen on land or at sea, in polar regions but also in the desert. This type of optical illusion is Mother nature’s way of saying: It’s magic. A Fata Morgana mirage can involve almost any kind of distant object, including boats, islands, houses, flying pigs and why not… huge flying cities.

In October 2015, several reports were made of floating cities appearing over Foshan Chine, and a few days later in Jiangxi, strangely at the same time, people on the other side of the planet reported seeing similar phenomenon over Hastings England.

In 2011, hundreds of people from the small border town of Dulali in Darazo, Nigeria, claimed to have seen a huge ‘flying city in the sky’. “The giant floating city” appeared out of nowhere, the entire city was surrounded by a thin cloud, it flew very close to the ground, through these “clouds” witnesses claimed to have seen beautiful large buildings, towers and the sound of machines originating from the city.

Interestingly, many people believe that the mysterious appearance of ‘floating cities’ above Earth might be caused by the mysterious experiments taking place at the LHC ‘atom smasher’ at the CERN center in Geneva, Switzerland. So far, scientists have been firing up the ‘atom smasher’ to its highest energy levels in a bid to find or even create, miniature black holes. According to scientists from the project, not only is it possible to create mini black holes, but gravity from our own universe may leak into a ‘parallel universe.

Discovering another ‘parallel universe’ would rewrite everything we thought possible, changing science forever.

“We predict that gravity can leak into extra dimensions, and if it does, then miniature black holes can be produced at the LHC. Normally, when people think of the multiverse, they think of the many-worlds interpretation of quantum mechanics, where every possibility is achieved. This cannot be tested and so it is philosophy and not science. This is not what we mean by parallel universes. What we mean is real universes in extra dimensions,” said Mir Faizal, one of the researchers at CERN participating in the project.

What do you think about this sighting? Is it possible that this is anomaly can be perfectly explained as a Fata Morgana or Mirage? Or is it possible that the numerous reports of floating cities around the world have a more mysterious origin? Let us know what you think. 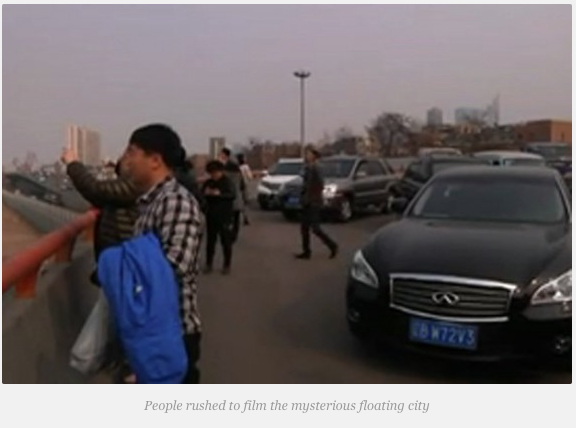