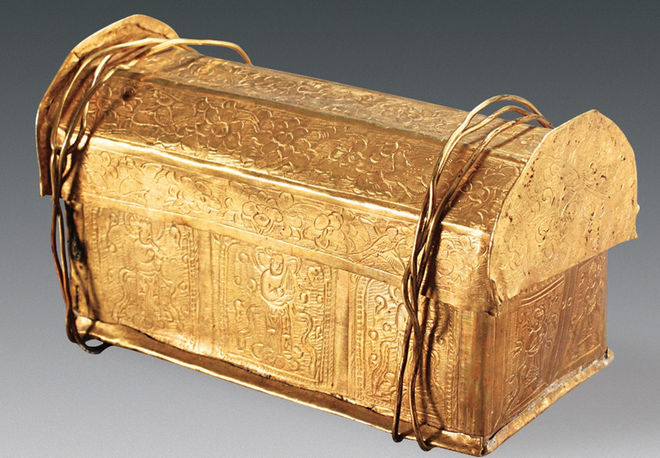 A skull bone of the Buddha was found inside this gold casket, which was stored in a silver casket within the stupa model, found in a crypt beneath a Buddhist temple.    Credit: Photo courtesy of Chinese Cultural Relics

Archaeologists have discovered what may be a skull bone from the revered Buddha, Siddhartha Gautama. The bone was hidden inside a model of a stupa, or a Buddhist shrine used for meditation.

The research team found the 1,000-year-old model within a stone chest in a crypt beneath a Buddhist temple in Nanjing, China. Inside the stupa model archaeologists found the remains of Buddhist saints, including a parietal (skull) bone that inscriptions say belonged to the Buddha himself.

The model is made of sandalwood, silver and gold, and is covered with gemstones made of crystal, glass, agate and lapis lazuli, a team of archaeologists reported in an article published in the journal Chinese Cultural Relics. 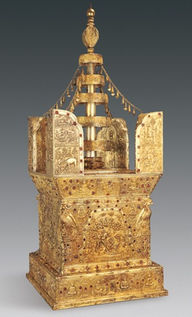 Inscriptions engraved on the stone chest that the model was found in say that it was constructed during the reign of Emperor Zhenzong (A.D. 997-1022), during the Song Dynasty. Also inscribed on the stupa are the names of people who donated money and material to build the model, as well as some of the people who constructed the model. [See Photos of the Model Stupa Holding Buddha Remains]

While the inscriptions say that the skull bone belongs to the Buddha, it is unknown whether it really does come from him. In the journal article, archaeologists didn’t speculate on how likely it is. The bone is being treated with great respect and has been interred in the modern-day Qixia Temple by Buddhist monks.

This model of a stupa, which is used for meditation, was discovered beneath Grand Bao’en Temple in Nanjing, China. The 1,000-year-old stupa is made of sandalwood, silver and gold.    Credit: Photo courtesy of Chinese Cultural Relics

This model of a stupa, which is used for meditation, was discovered beneath Grand Bao’en Temple in Nanjing, China. The 1,000-year-old stupa is made of sandalwood, silver and gold.

An inscription found within the stone chest was written by a man named Deming about 1,000 years ago, saying that he is “the Master of Perfect Enlightenment, Abbot of Chengtian Monastery [and] the Holder of the Purple Robe” (as translated by researchers in the journal article). He tells the story of how the Buddha’s parietal bone came to China.

Deming wrote that after the Buddha “entered parinirvana” (a final death that breaks the cycle of death and rebirth), that his body “was cremated near the Hirannavati River” in India. The man who ruled India at the time, King Ashoka (reign 268-232 B.C.), decided to preserve the Buddha’s remains, which he “divided into a total of 84,000 shares,” Deming wrote. “Our land of China received 19 of them,” including the parietal bone, he added.

The parietal bone was kept in a temple that was destroyed about 1,400 years ago during a series of wars, Deming wrote. “The foundation ruins … were scattered in the weeds,” Deming wrote. “In this time of turbulence, did no one care for Buddhist affairs?”

Emperor Zhenzong agreed to rebuild the temple and have the Buddha’s parietal bone, and the remains of other Buddhist saints, buried in an underground crypt at the temple, according to Deming’s inscriptions. They were interred on July 21, 1011 A.D., in “a most solemn and elaborate burial ceremony,” Deming wrote.

Deming praised the emperor for rebuilding the temple and burying the Buddha’s remains, wishing the emperor a long life, loyal ministers and numerous grandchildren: “May the Heir Apparent and the imperial princes be blessed and prosperous with 10,000 offspring; may Civil and Military Ministers of the Court be loyal and patriotic; may the three armed forces and citizens enjoy a happy and peaceful time …”

The parietal bone of the Buddha was buried within an inner casket made of gold, which, in turn, was placed in an outer casket made of silver, according to the archaeologists. The silver casket was then placed inside the model of the stupa.

The gold and silver caskets were decorated with images of lotus patterns, phoenix birds and gods guarding the caskets with swords. The outer casket also has images of spirits called apsaras that are shown playing musical instruments.

The parietal bone of the Buddha was placed within the gold inner casket along with three crystal bottles and a silver box, all of which contain the remains of other Buddhist saints.

Engraved on the outside of the model are several images of the Buddha, along with scenes depicting stories from the Buddha’s life, from his birth to the point when he reached “parinirvana,” a death from which the Buddha wasn’t reborn — something that freed him from a cycle of death and rebirth, according to the Buddhist religion.

A large team of archaeologists from the Nanjing Municipal Institute of Archaeology excavated the crypt between 2007 and 2010; they were supported by experts from other institutions in China.

Although the excavations received little coverage by Western media outlets, they were covered extensively in China. Chinese media outlets say that, after the parietal bone of the Buddha was removed, Buddhist monks interred the bone and the remains of the other Buddhist saints in Qixia Temple, a Buddhist temple used today. The Buddha’s parietal bone and other artifacts from the excavation were later displayed in Hong Kong and Macao.

When the bone traveled to Macao in 2012, the media outlet Xinhua reported that “tens of thousands of Buddhist devotees will pay homage to the sacred relic,” and that “more than 140,000 tickets have been sold out by now, according to the [event organizer].”