So who discovered or proved the Earth was round?

Eratosthenes (276-194 B.C.) the father of “Geography,” made the discovery around seventeen hundred years before Columbus. He speculated that the Earth was shaped like a ball based on the stories and myths of Greek sailors before proving his assumption. 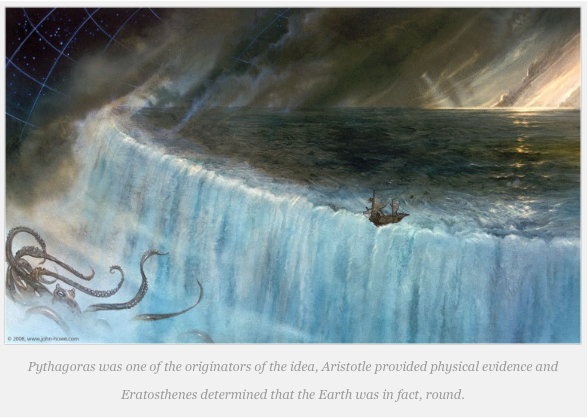 Eratosthenes, a Greek mathematician, geographer, poet, astronomer, and music theorist, is best known for being the first ever person on Earth who calculated the circumference of the Earth, and he did so by never leaving Egypt. He was able to calculate the circumference of our planet by applying a measuring system using stadia (A Stadion or stade, was an ancient Greek unit of length equal to a typical sports stadium at that time.)

Even though Eratosthenes’ discoveries are numerous, among the most important ones is his calculation of the tilt of the Earth’s axis but it is believed that he also was able to calculate the distance from the Earth to the Sun, thousands of years before “mainstream science.”

Eratosthenes was also the person who created the first map of the world incorporating parallels and meridians with the available geographical knowledge of the era. 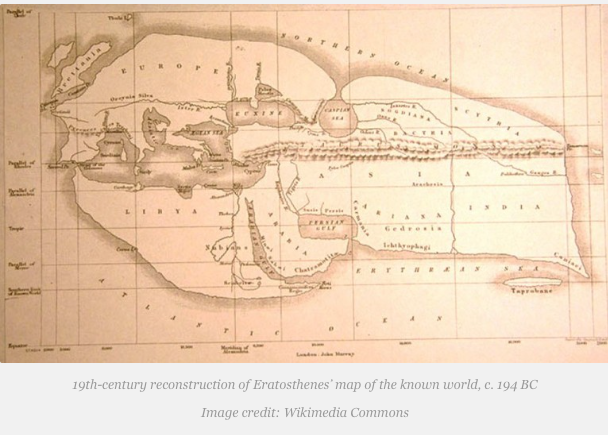 He was also the first to use a system of latitude and longitude in Geography. Eratosthenes managed to measure the distance between ancient Alexandria and Syene and concluded that they were separated by five hundred miles. He based his calculations on the average speed of Camel caravans that traveled the distance. He continued his observations and noted that at noon, on the summer solstice which s the longest day of the year, there were no shadows being casted in a well in the city of Syene in Egypt. The Sun was directly overhead at that time so he assumed that the Sun was so far off that the Rays of our Star were approaching Earth in parallel.

Further more, because the Sun set at the same time when it was directly between the cities of Alexandria and Syene, he concluded that the city of Syene to be on the same meridian as the city of Alexandria. On summer solstice, exactly at noon, in ancient Alexandria, Eratosthenes was able to measure the angle of the sun’s rays concluding they were 7.2 degrees angle with a tall rod.

His measurements, calculations and assumptions were more accurate with every new study. Eratosthenes knew that in his hometown Alexandria, based on calculations, the angle of elevation of the sun was 1/50th of a circle which is 7º12′ south of the Zenit on Solstice noon.

He assumed that Alexandria was north of Syene and that the Earth was in fact spherical, having 360º, he concluded that the meridian arc distance from Alexandria to Syene to be 1/50 = 7º12’/360º, hence obtaining 1/50 fo the total circumference of the Earth. Eratosthenes knew that five hundred miles was 1/50 the circumference of our planet, so he sed fifty of these lengths to surround the entire Earth. He went on and multiplied five hundred miles by fifty and obtained twenty-five thousand miles. Eratosthenes added another two hundred miles because of “potential bad measurements.”