Is there even a slight possibility that ancient mankind learned a way to harness free energy? Energy that they used to achieve amazing accomplishments such as the construction of the Pyramids? Teotihuacan? Puma Punku? Can all of this be connected to extraterrestrial visitors like the Ancient alien theory suggests? How else did ancient mankind achieve this “boom” in science and technology? Can this “Energy Grid” be used as a form of free energy? Free inexhaustible energy that flows naturally around our planet?

What is really interesting is the fact that all of these locations were and still are associated with a large number of UFO sightings, these “visitors” seem to understand the importance of these places and often visit them, as if they feed off of these locations, obtain energy from them.

In Herefordshire England, we have what Ancient Alien theorists call the Ancient Flight Plans. Discovered by amateur archaeologist Alfred Watkins while horseback riding, Watkins noticed that the structures across the landscape appeared to be arranged in straight lines. Four years after that, in 1925 Watkins published his book “The old straight tracks” where he proposed that ancient mankind built monuments and megaliths and that these were connected by a network of straight lines. Referred to as ley lines. 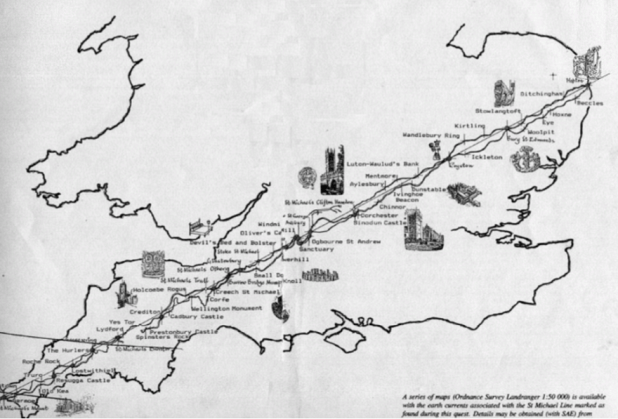 These so called ley lines are mostly found in England and in France. They are geographic markings of a number of places of geographical and historical interest, such as ancient monuments and megaliths, natural ridge-tops and so on.

According to Linda Moulton Howe, The Michael Line in England is a straight line and it is measurable. It’s a magnetic field line that you can measure and it will be higher than other areas around it geographically.

In his book, “The old straight tracks“, Watkins proposed that ancient monuments were deliberately placed along these lines for line of sight navigation and were used as trade routes, but this theory does not seem to hold due to the fact that these lines cross terrains that were difficult to access and to identify so there had to be another purpose to this geometric and precise pattern, some sort of ancient code?

Today there are several researchers that believe that these Ley lines are magnetic in nature and that they delineate the lines of Earth’s unseen energy fields.

More of these geometrical patterns can be found in Denmark, along the northern reaches of the European continent we find the archaeological ruins of a once prospering and mighty Viking fortress dating to 900 A.D. It was Preben Hansson who first discovered a direct line of flight from Trelleborg to other three Viking fortresses, which are also same in design.

What you have here is a direct line that connects four Viking Forts in Denmark, now this is strange, why? because the Vikings were seafaring people, known as might warriors and sailors so these forts in land, aligned precisely do not make much sense, you would believe that Vikings would have constructed forts near water and perhaps in a different pattern.

Researchers have been baffled by the precise design of Trelleborg with courtyard’s divided into four zones, each with four longhouses and gateways open precisely to the four cardinal directions: north, south, east and west. It is clear that the construction and design of Trelleborg would have required great knowledge of engineering.

What is perhaps even mores interesting is the fact that if you draw a straight line and cross the Alps in Europe you will eventually reach Delphi in Greece, known for the Oracle of Delphi and to the God Apollo. According to Greek mythology, every once in a while, Apollo took his “heavenly chariot” and disappeared heading north.

Could all of these patterns and lay lines be ancient flight patterns as the Ancient Aliens theory suggests? How would you explain that the ancient Viking forts in Denmark point to the Oracle of Delphi which leads to the Pyramids of Egypt? It is not a coincidence. It would make sense if these constructions and monuments are long straight lines across our planet’s grids, perhaps these grids were navigational markers that visitors from outer space used, to navigate in straight lines.

If you look the way that our modern-day aircrafts fly, they do it in straight lines, avoiding turns if possible, pilots also guide themselves by landmarks to establish locations and to orient themselves. If our pilots navigate this way and use these spots as orientational marks, could have extraterrestrials visiting us in the past, and even today, also have guided themselves by these locations and grids?

Is there a code encrypted in the location of the monuments around the world, like the pyramids of Egypt? Teotihuacan in Mexico? The Oracle of Delphi? Forming The Earth grid?