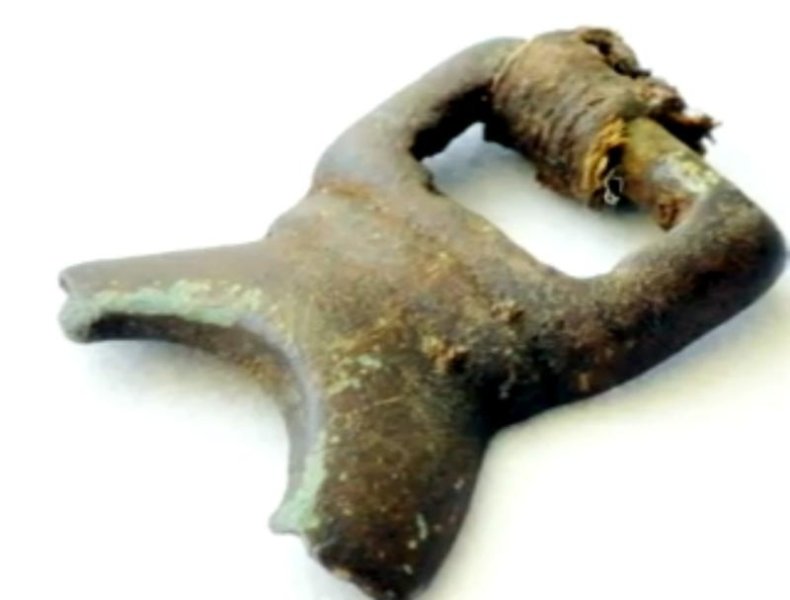 Some years ago, a team of researchers led by the University of Colorado Boulder has discovered the first prehistoric bronze artifact made from a cast ever found in Alaska, a small, buckle-like object found in an ancient Eskimo dwelling and which likely originated in East Asia.  (Credit: Colorado. edu)

A team of researchers led by the University of Colorado Boulder has discovered the first prehistoric bronze artifact made from a cast ever found in Alaska, a small, buckle-like object found in an ancient Eskimo dwelling and which likely originated in East Asia.

The artifact consists of two parts — a rectangular bar, connected to an apparently broken circular ring, said CU-Boulder Research Associate John Hoffecker, who is leading the excavation project. The object, about 2 inches by 1 inch and less than 1 inch thick, was found in August by a team excavating a roughly 1,000-year-old house that had been dug into the side of a beach ridge by early Inupiat Eskimos at Cape Espenberg on the Seward Peninsula, which lies within the Bering Land Bridge National Preserve.

Both sections of the artifact are beveled on one side and concave on the other side, indicating it was manufactured in a mold, said Hoffecker, a fellow at CU-Boulder’s Institute of Arctic and Alpine Research. A small piece of leather found wrapped around the rectangular bar by the research team yielded a radiocarbon date of roughly A.D. 600, which does not necessarily indicate the age of the object, he said.

“I was totally astonished,” said Hoffecker. “The object appears to be older than the house we were excavating by at least a few hundred years.”

Hoffecker and his CU-Boulder colleague Owen Mason said the bronze object resembles a belt buckle and may have been used as part of a harness or horse ornament prior to its arrival in Alaska. While they speculated the Inupiat Eskimos could have used the artifact as a clasp for human clothing or perhaps as part of a shaman’s regalia, its function on both continents still remains a puzzle, they said.

Since bronze metallurgy from Alaska is unknown, the artifact likely was produced in East Asia and reflects long-distance trade from production centers in either Korea, China, Manchuria or southern Siberia, according to Mason. It conceivably could have been traded from the steppe region of southern Siberia, said Hoffecker, where people began casting bronze several thousand years ago.

Alternatively, some of the earliest Inupiat Eskimos in northwest Alaska — the direct ancestors of modern Eskimos thought to have migrated into Alaska from adjacent Siberia some 1,500 years ago — might have brought the object with them from the other side of the Bering Strait. “It was possibly valuable enough so that people hung onto it for generations, passing it down through families,” said Mason, an INSTAAR affiliate and co-investigator on the Cape Espenberg excavations. 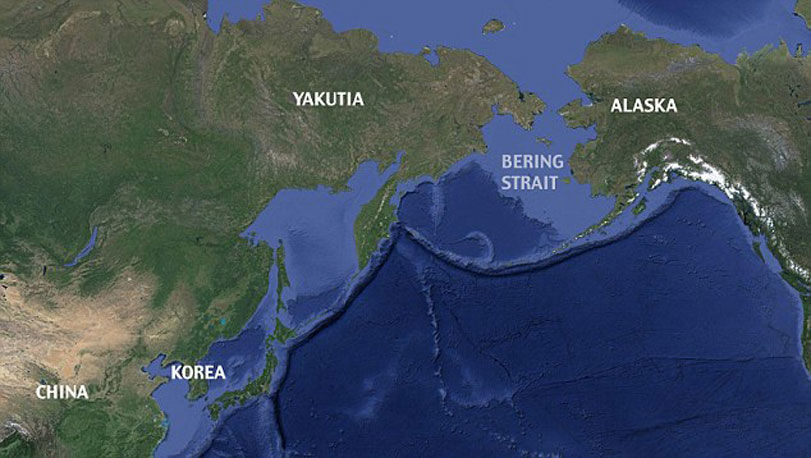 The Seward Peninsula is a prominent, arrowhead-shaped land mass that abuts the Bering Strait separating Alaska from Siberia. The peninsula was part of the Bering Land Bridge linking Asia and North America during the last ice age when sea level had dropped dramatically, and may have been used by early peoples as a corridor to migrate from Asia into the New World some 14,000 years ago.

“The shape of the object immediately caught my eye,” said Foin, who spotted the soil-covered artifact in an archaeological sifting screen. “After I saw that it clearly had been cast in a mold, my first thought was disbelief, quickly followed by the realization that I had found something of potentially great significance.”

The CU-led excavations are part of a National Science Foundation-funded project designed to study human response to climate change at Cape Espenberg from A.D. 800 to A.D. 1400, a critical period of cultural change in the western Arctic, said Mason. Of particular interest are temperature and environmental changes that may be related to Earth’s Medieval Warm Period that lasted from about A.D. 950 to 1250.

“That particular time period is thought by some to be an analog of what is happening to our environment now as Earth’s temperatures are rising,” said Mason. “One of our goals is to find out how these people adapted to a changing climate through their subsistence activities.”

The Cape Espenberg beach ridges, wave-swept deposits made of sand and sediment running parallel to the shoreline that were deposited over centuries, often are capped by blowing sand to form high dunes. The Cape Espenberg dwellings were dug into the dunes and shored up with driftwood and occasional whale bones.

The team is examining the timing and formation of the beach ridges as well as the contents of peat and pond sediment cores to help them reconstruct the sea-level history and the changing environment faced by Cape Espenberg’s settlers. Information on past climates also is contained in driftwood tree rings, and the team is working with INSTAAR affiliate Scott Elias, a University of London professor and expert on beetle fossils, who is helping the team reconstruct past temperatures at Cape Espenberg.

While the hunting of bowhead whales was a way of life for Inupiat Eskimos at Barrow and Point Hope in northwestern Alaska 1,000 years ago, it is still not clear if the Cape Espenberg people were whaling, said Mason. While whale baleen — a strong, flexible material found in the mouths of whales that acts as a food filter — and a variety of whale bones have been found during excavations there, the sea offshore is extremely shallow and some distance from modern whale migration routes. However, there is evidence of fishing and seal and caribou hunting by the group, he said.

The Inupiat Eskimos are believed to have occupied Cape Espenberg from about A.D. 1000 until the mid-1800s, said Hoffecker. They are part of the indigenous Eskimo culture that lives in Earth’s circumpolar regions like Alaska, Siberia and Canada.

The Cape Espenberg site has yielded a treasure trove of several thousand artifacts, including sealing harpoons, fishing spears and lures, a copper needle, slate knives, antler arrow points, a shovel made from a walrus scapula, a beaver incisor pendant, ceramics, and even toy bows and toy harpoons.