Once thought to be natural formations, we now know the extremely weathered formations in Tacume are indeed ancient pyramids.

Peru is rapidly becoming the capital of the pyramid world. Not only does it have the oldest officially recorded pyramid in the world (Caral), with each archaeologist’s spade dig, more pyramid complexes are uncovered.
Near the city of Sipan is one of the major pyramid concentrations of Southern America: the pyramids of Tucume, known as “the Valley of the Pyramids”. The Lambayeque Valley is the largest valley of the North Coast of Peru, located between the Pacific Ocean and the Andes mountain range. It has no less than three pyramid cities, which together have a stunning total of 250 pyramids. The three cities were built in succession of each other, each abandoned before a new one was built.
The first is known as Pampa Grande and was built between 600 and 750 AD. In 700 AD, the pyramid of Pampa Grande, known as Huaca Fortaleza, was built, reaching fifty metres high, and measuring 200 metres in width. Though much of the structure remains intact, visually, it is not all that impressive. The next complex was that of Batan Grande, built between 750 and 1100 AD. The city had 34 pyramids, including the Huaca de Oro (Pyramid of Gold), in front of which a series of royal tombs were located. The pyramids are now badly eroded, due to El Niño rains in 1982 and 1998. But the biggest destruction to the site was man-made when in ca. 1100 AD, the pyramid was burnt and the town abandoned, to be succeeded by Tucume, from 1100 AD until 1500 AD.
Tucume lies on the southern margin of the valley and is surrounded by fertile agricultural land, thanks to the Taymi canal, which brings water northwards from the Chancay River. The construction of the 43 km long canal coincided with the settlement of Tucume, around 1100 AD.
The 26 pyramids and mounds of Tucume are locally known as Purgatory. The local shamans still invoke its power and of the gods that once resided in these structures. Specifically, the gods lived in the mountains, but the pyramids were seen as replica mountains, in the hope of being able to work with the forces of nature. The local shamans are also the record keepers of the legends, including one legend recorded by Father Cabello de Balboa in 1586 AD. It relates how Cala, a grandson of Naymlap, the founder of the Lambayeque royal dynasty, declared that Tucume would become the new metropolis for his people. Cala seems to have been an exile from Batan Grande. 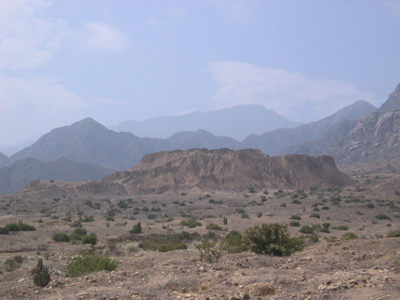 Though there are 26 structures in total, most of the archaeological work is focused on the three main structures: the Huaca Larga, Huaca One and the U-shaped “Temple of the Sacred Stone”. The Huaca Larga, or the Long Pyramid, is the longest adobe structure known to date. It measures 700 metres in length, from the foot of La Raya Mountain to the short, straight access ramp on the north end. It is 280 metres wide, and thirty metres tall. Originally, it was a freestanding platform, but it was remodelled into is current shape by adding the step pyramid on top. Long corridors and dividing walls partition the complex, and researchers have identified a northern, possibly public, ceremonial area and a southern area devoted to cooking and manufacturing.
All buildings of this period, which marks the Chimú domination of the area, were painted in the colours red, white and black. The walls were decorated, one mural depicting flying birds in the “Temple of the Mythical Bird” stands out from the rest. Apparently, the Chimú tried to convert Huaca Larga into a structure that resembled the vast adobe city of Chan Chan, found near Trujillo.

Though Tucume is now properly analysed, it went largely unrecognized until Thor Heyerdahl’s interest was ignited by the complex in 1988. Heyerdahl and his team interpreted the cultural significance of their findings, the greater implications of the architectural site, the fascinating pyramid structures, and impressive artefacts uncovered. The most exciting discoveries are linked to Heyerdahl’s inquiry regarding possible ocean travel and boatbuilding by early inhabitants of Tucume. Among the finds were stunning friezes depicting birdmen piloting reed boats amid anthropomorphic waves.
Thor Heyerdahl explored the pyramids of Tucume personally and his team opened forty tombs. So many artefacts were uncovered that a museum was built at Tucume. Four burial chambers were found in the 600 meter long Huaca Larga pyramid. Inside these chambers, the bodies of nineteen female weavers, between the ages of ten and thirty and because of their ages assumed to have been sacrificed, were found. These date from the Inca period (1470-1532 AD). The weaving of delicate textiles, an activity that the Inca often entrusted to consecrated women, was therefore practiced at Huaca Larga and may well date back to what archaeologists have labelled Chimu period (1100-1400 AD). It underlines that though archaeologists and historians have neatly divided Peruvian history in various “cultures”, the sites show continuity in use, with one culture not abandoning a sacred site and constructing its own, but merely “taking over” the management of the site. 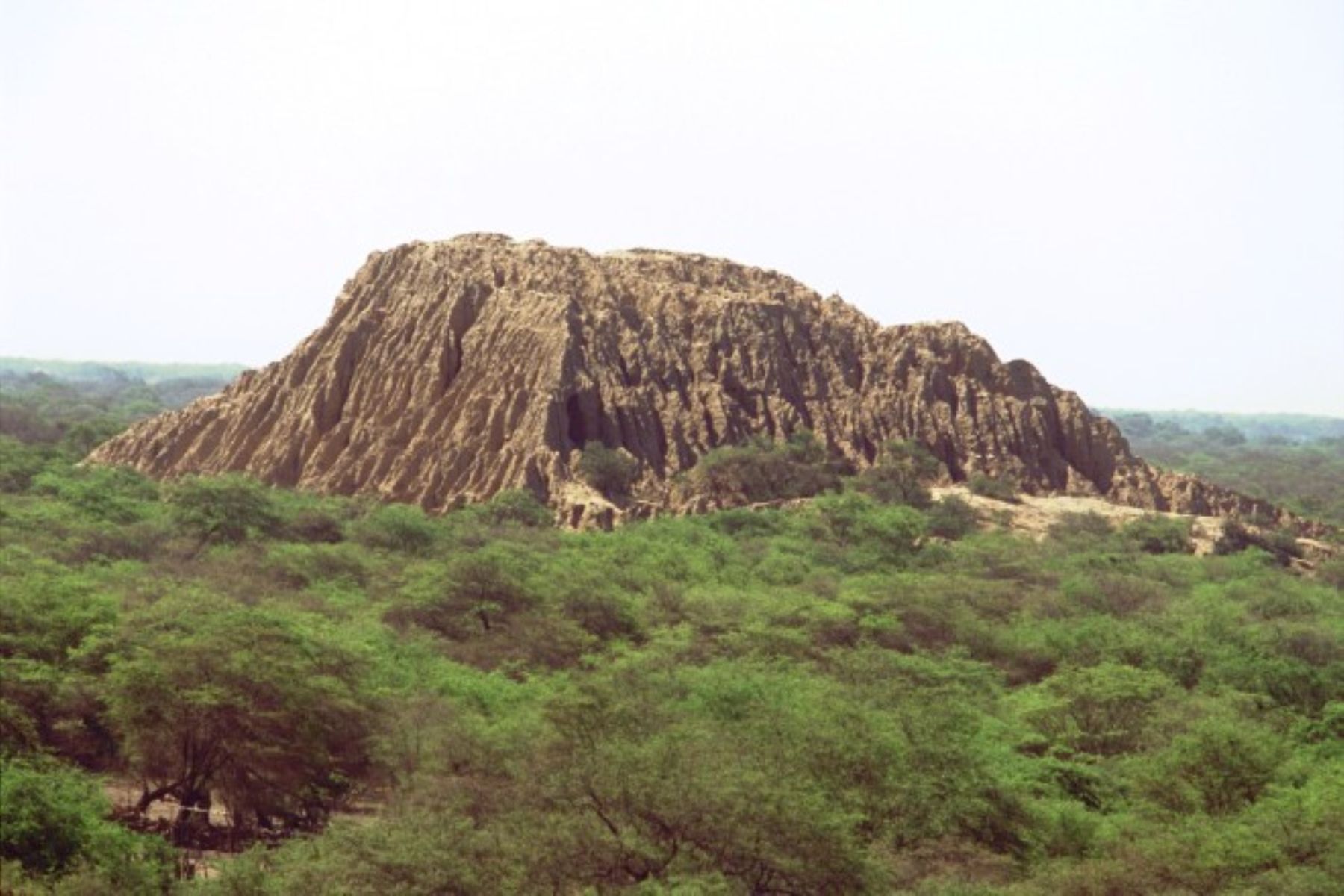 In Tucume, it would take about 2000 people per year to make bricks for one pyramid. It would therefore take thousands of people to complete one pyramid, but there are no less than 26 in total in Tucume alone, and more than 200 across the entire valley! Pyramid building would thus have been an all-consuming task for the people of this valley. It is also clear that the pyramids were built according to a strict master plan.
The pyramids were not tombs. The tops of most pyramids were flat and there were either rooms in or along the path upwards. Some of the rooms contained food remains, like llama and large fish, traditionally assumed to be the food of the wealthy. There was an oven with charcoal, all suggestive of the fact that people lived here for long periods of times. On top of one pyramid, the remains of a 35 year old man have been discovered. He wore jewellery and a feather headdress, clearly a member of a governing elite, either in a political and/or religious sense.
In a different room atop Huaca Larga, archaeologists discovered three male burials, one of them of a mature, robust man with insignia, suggesting he may have been the Inca governor of Tucume. Shortly after these burials took place, all standing structures on Huaca Larga were razed and huge fires were lit on top.

Oral history also recalls that enormous fires were lit by the Spanish colonists to convince the local population that Tucume was the gate to purgatory. As mentioned, Purgatorio (purgatory) is still the name by which the local people refer to the complex today. But despite this “Christian warning”, local shaman healers (“curanderos”) continue to invoke the power of Tucume and the central La Raya Mountain in their rituals, assisted by shamanic techniques and the psychoactive San Pedro cactus, holding weekly rituals which researchers believe have been going on since Inca times – if not before.
Like the Cerra Blanco hill at the Chan Chan complex, the Cerra La Raya forms the focus of this site. All 26 structures are built around this circular and cone-shaped hill, which rises 197 metres high and which is also known as “El Purgatorio”, or Cerro Purgatorio. Its official name, Cerra La Raya, is derived from a ray fish that according to legend lives within the hill.
It is clear that this hill was held sacred – and continues to be held sacred – and is at the core of why these structures were erected here. Access to the sacred mountain was originally restricted, as many cultures felt that humans should not enter the domain of the “apu”, the mountain god, though there is evidence of later Inca constructions on the hill, such as an altar site. That the mountain of the gods was off-limit to humans explains why the people “had” to build a pyramid – a replica mountain which they were allowed to access.

To fully understand the Tucume complex, we need to look at the “Temple of the Sacred Stone”, which is a small, unpretentious, rectangular U-shaped structure to the east of Huaca Larga. It is considered a major temple that pilgrims had to pass by before entering the complex. The walled roadway system of this section of the Lambayeque valley leads straight to this temple, and then onwards to Huaca Larga. The revered object of this temple appears to have been a large, upright boulder in the middle of the one-room building: the “sacred stone”. Archaeologists “officially” do not know what it represents, but in my humble opinion, it represents the “navel of the world”, identifying this site as a sacred centre. Such navel stones have been found in various religious centres throughout the ancient world, with the navel stone of Delphi probably the most famous example. As the Cerra La Raya was off-limits for humans, the “sacred stone” was used as the mountain’s physical presence in the sacred precinct, the only part of the apu that they were allowed to come close to, if not touch. The small “Piedra Sagrada” represented the larger omphalos of “Cerro Purgatorio”.
The identification of the site and the mountain with Purgatory is therefore probably not a coincidence. The Spanish Conquistadors probably understood the local rituals and compared them with their own Christian upbringing. Purgatory and fire go hand in hand in the Christian tradition, where purgatory is a state of existence, the domain of the dead who were with sin and where the fire purges the soul of its sin.
There are clear references to Purgatory in both the Old and the New Testaments. In 2 Macchabees 12: 43, 46 the Jewish practice of praying for the dead stated that “it is therefore a holy and wholesome thought to pray for the dead that they may be loosed from their sins.” The sins of these dead were removed by what was believed to be a long, slow “simmer” of fire. St Cyprian and St Augustine spoke of purification by fire, which “purges away all sin by suffering.” Is it coincidence, or design, that elsewhere, pyramids – by their very name – are linked with fire? Let us also note that when one complex was abandoned, the structures on top of the pyramids were burnt, as if to literally obliterate the “sins” of a previous era and move to a new temple complex.
These fires would have been so intense that they would have been visible for miles, but there is no evidence of battles or invasions, not even of an army. The people who built the pyramids did it themselves and to themselves and archaeologists, like Bernarda Delgado, the Tucume Archaeology Director, do not know the reason why. Could it be that the reason was religious and linked with the New Fire Ceremony? It is clear that the inhabitants of these complexes burnt the top of the carefully built pyramids and then left. “Purging” the old site may indeed be the true answer to the burning of the complexes and the Spanish Conquistadors, in identifying the site as purgatory, may have understood far more than we would initially give them credit for.*

Source:  The Peruvian Valley of the Pyramids – Article By Philip Coppens

Note: Sections of this article were excerpted from “The New Pyramid Age”.